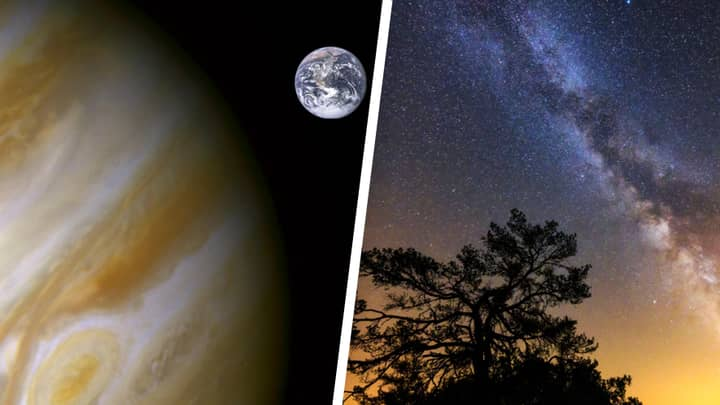 Jupiter will look bigger and brighter than it has in more than five decades Monday night as the massive gas giant will be at its closest point to Earth – so close in fact that several of its moons also will be strikingly noticeable.

According to NASA, the massive gas planet will come into view as it reaches opposition, meaning it rises in the east as the sun sets in the west, a planetary maneuver that takes place every 13 months.

What makes this event unique is that Jupiter’s orbit has not brought the gas giant this close to Earth since 1963, making this year’s approach an extraordinary opportunity to view the biggest object in the solar system.

Opposition has to do with Jupiter’s and Earth’s orbits as both have an elliptical orbit around the sun, which are not perfect circles, but are elongated orbits – meaning the distance between the two planets varies as they make the journey around the sun.

Jupiter’s closest approach to Earth rarely coincides with opposition, but this year it does, making this close approach towards the blue marble special.

For sky watchers in Southern Utah, Jupiter will be visible by looking east soon after sunset, where the gas planet will appear in the twilight as the brightest thing in the night sky apart from the moon. The best viewing times are from 7:29 p.m. Monday through sunrise on Tuesday, according to Time and Date.

Adam Kobelski, a research astrophysicist at NASA’s Marshall Space Flight Center in Huntsville, Alabama, said in a statement last week that the banding running across Jupiter, or at least the central band, as well as three or four of the planet’s moons should be visible with a good pair of binoculars.

“It’s important to remember that Galileo observed these moons with 17th century optics,” Kobelski said, adding that a stable mount is one of the key components for whatever system is used.

Kobelski went on to say that Jupiter’s “Great Red Spot” and other bands can be seen in greater detail using a larger telescope that would also enhance the visibility of the planet’s many other unique features.

For optimum viewing, NASA recommends a high elevation location that is dry, dark and free of competing light pollution. The view of Jupiter will continue for a few days after Monday, and outside of the moon, the gas giant should be one of if not the brightest objects in the night sky, NASA says.

Jupiter – most massive gas ball in the solar system

Jupiter is 318 times as massive as Earth and more than twice as massive as all of the other planets in the solar system combined. The surface area of this enormous planet is more than 23.7 billion square miles, but because it’s made up of hydrogen and helium, it has only one-fifth the density of Earth.

For all its size and mass, Jupiter is still the fastest spinning planet in the solar system – clocking in at speeds of more than 28,000 mph, which enables the gas giant to make a trip around the Sun in 10 hours, NASA says.

It is also the third brightest object in the solar system, after Venus and Earth’s moon.

Because Jupiter is made of gas, its surface is uniform – meaning it lacks high and low points, or mountains and valleys, such as what is found on the rocky planets. If Jupiter got any more massive, it would actually get smaller since additional mass actually would make the planet denser, which would cause it to start pulling it in on itself.

Jupiter also has a ring system that astronomers believe came from material ejected by its moons when they’re struck by meteorite impacts and has the strongest magnetic field in the Solar System that is generated by the swirling movements of conducting materials that move within the liquid metallic hydrogen core.

The gas giant has 67 confirmed and named satellites; however, scientists estimate there may be as many as 200 moons orbiting the gas giant, but the four major moons, referred to as the Galilean Moons, are some of the largest in the solar system and include Lo, Europa, Ganymede and Callisto.

Jupiter has the strongest magnetic field in the solar system and is generated by the swirling movements of metallic materials that move within the liquid hydrogen core – a process made even more effective thanks to the planet’s rapid rotation.

All of the whirling clouds and storms visible on the gas giant’s surface are only 38 miles thick and are made of ammonia crystals, but below the cloud cover, scientists believe it is just hydrogen and helium all the way down.

Discovered in 1665, the Great Red Spot is one of Jupiter’s most familiar features that was discovered by Italian astronomer Giovanni Cassini. This spot is actually a persistent anticyclonic storm located south of the planet’s equator that was created by Jupiter’s turbulent and fast-moving atmosphere, Space.com says.

This storm has been raging for at least 350 years and is massive – measuring roughly 15,000 miles across nearly 8,900 miles high. It is so large, in fact, that three Earth-size planets could fit in its diameter.

A trip into Jupiter

With no solid surface to land on, if a person attempted to jump onto Jupiter from a spacecraft, it would be over fairly quickly. They would never make it within 200,000 miles of the planet as radiation would penetrate the spacesuit and they would die.

Even with a special spacesuit, a human would fall from the top of the atmosphere at more than 110,000 mph, due to Jupiter’s immense gravity, and at roughly 150 miles down the temperatures would drop to 240 degrees below zero – Fahrenheit.

The journey would continue into an intense whirlpool of 300 mph winds created by Jupiter’s clouds surrounding the fastest moving planet in the solar system. Another 75 miles down is the deepest any object has ever sailed into the gas giant, a depth made possible in 1995, when NASA’s Galileo probe made it down that far before it was destroyed by the pressure of Jupiter’s atmosphere.

After a 12-hour journey, the environment would become darker the farther down the descent, until it becomes completely pitch black – except for the light emitted from the lightening storms happening all around. From there, the temperature would start to rise as the journey continues to descend, as well as the immense physical pressure that is 1,000 times greater to Earth’s, and at the gas giant’s core, it would be as hot as the surface of the Sun.

Either way, even if a person escaped the liquid metallic hydrogen and the other hazards through the planet’s core, they would be stuck in Jupiter’s atmospheric pressure, never to escape.

Jupiter can be viewed for a few days after Monday’s close approach, and with clear skies on the horizon, the gas giant should be the brightest object in the sky, Kobelski said.