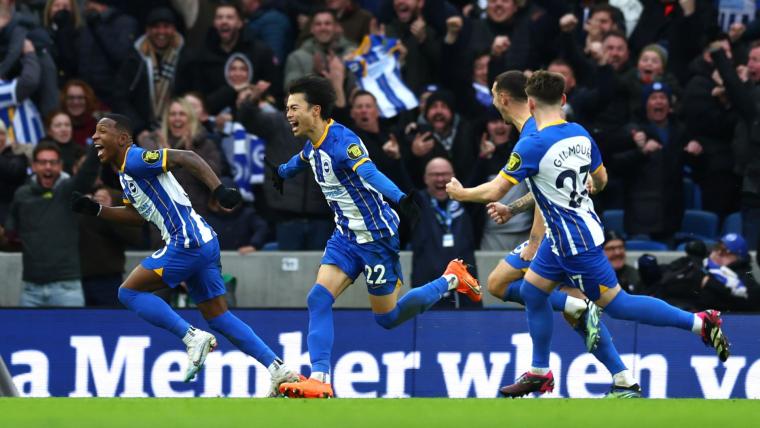 An injury-time goal from Kaoru Mitoma sent Brighton into the fifth round of the FA Cup at the expense of holders Liverpool.

The sides looked all set for an Anfield replay approaching the final minutes of a contest that had earlier seen a Harvey Elliott opener quickly cancelled out by Lewis Dunk.

Reds midfielder Fabinho was arguably lucky not to be sent off for an ugly foul on Evan Ferguson.

Fabinho only entered the game as an 85th-minute substitute but he was immediately at the center of the action.

The Brazilian’s first involvement was to foul Brighton’s Evan Ferguson, who was forced to leave the field with an injury as a consequence.

Reds can cling to positives

As this game entered its 90th minute, it looked like Liverpool were heading for another creditable result with useful confidence-boosting properties as they continue to try and turn their season around.

Yet, while the concession of that late winner will change perceptions, Klopp has little choice but to cling to the positives from a painful defeat.

The main upside was the vast improvement in the Reds’ defensive structure compared to a 3-0 defeat (and it could have been more) at this very stadium just two weeks ago.

The Seagulls waltzed to a comfortable 0-3 away victory in that match earlier this month, thanks to a Solly March double and a Danny Welbeck strike, in a performance which illustrated the relentless attacking philosophy of new coach Roberto De Zerbi.

Unbeaten in their last four and currently sitting sixth in the table, Brighton are on the up and will fancy their chances here against a Liverpool side that are struggling to live up to their Premier League heavyweight status.

One major reason for the Reds’ recent improvement, particularly in the centre of the park, is the emergence of teenager Stefan Bajcetic as a genuine option.

The Spaniard was once again hugely impressive here, snapping into challenges and using the ball intelligently in tight areas to neuter the Brighton press.

The value of his contribution was perhaps best underlined by the performance of the woefully off-it Fabinho during a late cameo that should have seen him sent off.

Bajcetic is now Klopp’s first-choice No.6 for one reason: he is a far better option there than any of his more senior colleagues.

Brighton vs. Liverpool as it happened, highlights

FULLTIME: All over at the Amex and Brighton march into the fifth round of the FA Cup at the holders’ expense thanks to that moment of late drama.

The hosts deliver a free-kick to the far post where Estupinan loops it back across to Mitoma and it’s unbelievable feet from the Japanese to cut inside with a bouncing ball and poking it high into the roof of the net.