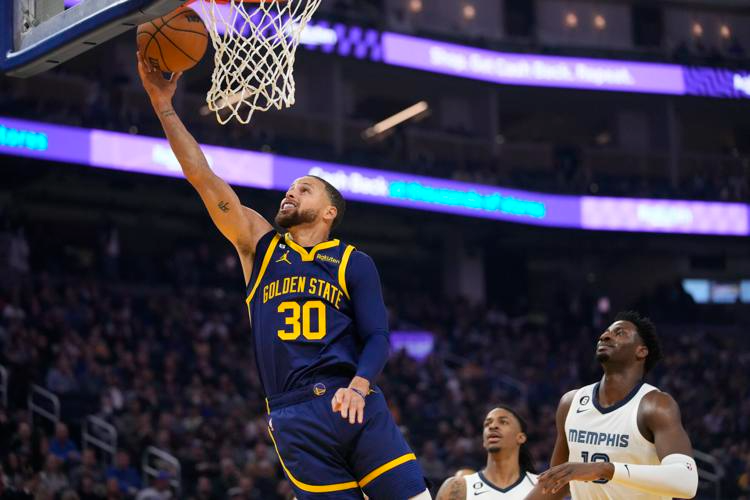 SAN FRANCISCO (AP) — Stephen Curry threw his mouthpiece into the seats in frustration and got tossed himself for the surprising episode late in the game.

And the Golden State Warriors still pulled off a wild one against the nemesis Memphis Grizzlies.

Jordan Poole made the winning layup with a second remaining to cap a crazy, back-and-forth final minute, and the Warriors fought back to beat Ja Morant and Memphis 122-120 on Wednesday night.

Curry outdueled Morant and scored 34 points before being ejected with 1:14 remaining in another thrilling game between the rivals who played last year in the Western Conference semifinals won by the Warriors in six games.

Curry hit a tying jumper with 2:18 left and made three free throws at the 1:55 mark. He wasn’t around for the finish after firing the mouthpiece into the stands. Crew chief Sean Wright confirmed the reasoning to a pool reporter: “Stephen Curry takes his mouth piece and throws into the stands with force, as per rule, that is an automatic ejection.”

“He knows he can’t make that mistake,” coach Steve Kerr said. “To win the game after the Steph ejection was great. I liked the execution down the stretch.”

Afterward, Curry was in the hallway eager to greet Poole with a celebratory hug. Poole had launched a 30-footer with nearly a full shot clock and Curry open, and Curry didn’t like it.

Curry said the way the season has gone there’s a “heightened sense of urgency of how every detail matters.”

“The way that we responded after that shows just how much it matters to us,” Curry said.

Brandon Clarke had a tying dunk with 6.3 seconds left for Memphis on a pass from Morant after Thompson’s 3-pointer with 14.6 remaining put the Warriors ahead. Thompson then missed a rushed baseline jumper with five seconds to play, but Golden State got the ball out of bounds.

Morant wound up with 29 points and 12 assists after missing a game with an ankle injury. He converted a pair of free throws with 26.6 seconds left to put Memphis ahead before Thompson’s big 3.

Desmond Bane added 20 points for the Grizzlies in a balanced effort to help lessen the sting of losing durable big man Steven Adams for the foreseeable future with a knee injury.

Morant, who missed a loss Monday night at Sacramento with soreness in his left ankle, found Clarke for an alley-oop layup and three-point play with 4:10 remaining then Curry and Poole scored consecutive layups.

Thompson added 24 points and his 3 with 3:38 left in the third pulled the Warriors to 81-79. Then Curry converted a tying four-point play with 2:27 to go in the period after falling into the courtside seats.

The Warriors had lost four straight home games after beginning the season 17-2 at Chase Center.

Jonathan Kuminga moved into the Golden State starting lineup with Andrew Wiggins ill. Late in the first half, Kuminga drove through the lane for a highlight-reel left-handed slam then knocked down a 3-pointer a few possessions later. He wound up with 13 points.

Poole finished with 21 points and seven assists as the Warriors beat the Grizzlies again following a 123-109 win on Christmas Day. The Grizzlies have lost a season-high four straight to begin this season-long five-game West Coast trip.

“It’s a long season. I don’t think too many people are too flustered,” Bane said.

Draymond Green — who called that final out-of-bounds play for Poole’s winner — was whistled for his 14th technical foul of the season, moving him within two of an automatic one-game suspension.