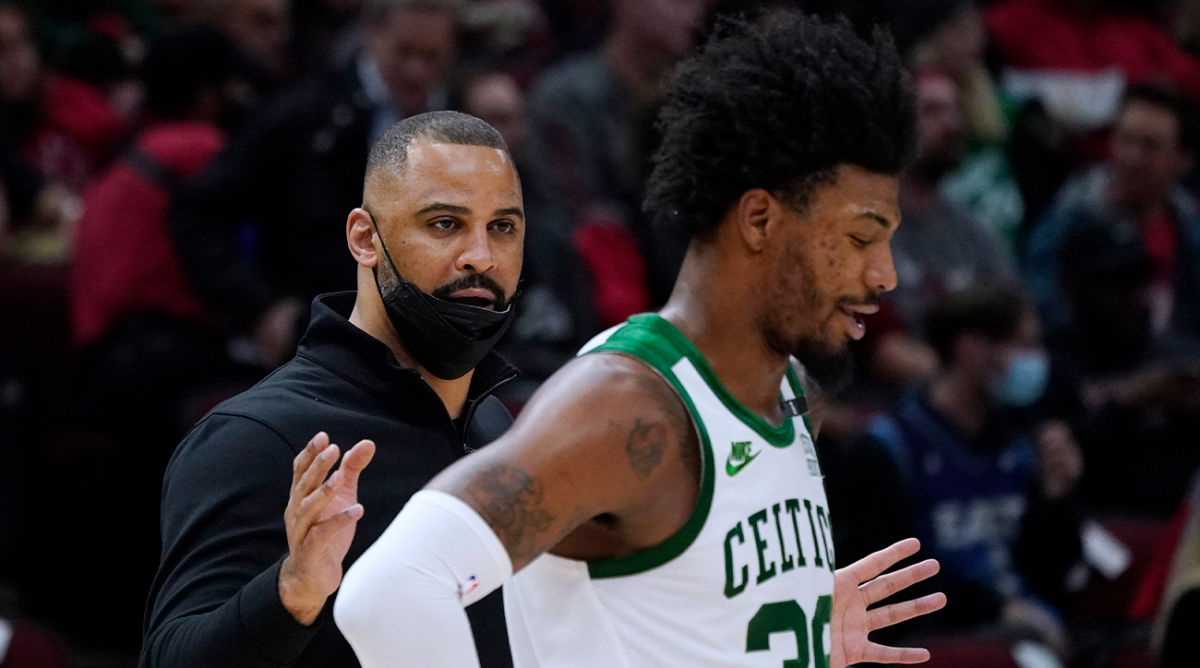 NEW YORK – The Celtics are headed to the second round.

Who would have thought that?

It’s easy to now, of course. Boston has been running roughshod on the NBA for four months. They beat Brooklyn a couple of times in February. They hammered Golden State and Denver by double digits in March. Since Jan. 1, the Celtics led the league in (deep breath) defensive rating, net rating scoring margin, opponent points and opponent field goal percentage, racking up a 34–12 record along the way. In a four-game sweep of Brooklyn they put one of the NBA’s best scorers, Kevin Durant, in a basketball straitjacket.

Give Brooklyn credit: Down 3–0, the Nets played like a team that wanted another trip to Boston. Durant, tired of playing facilitator, scored 39 points on 31 shots. Kyrie Irving, after a listless seven-point first half, scored seven in the fourth quarter. Seth Curry got going. Goran Dragic made shots. It was a one-point game with 90 seconds to play in the fourth. But Durant, who played a series-high 47 minutes, missed a free throw that would have kept the deficit at one with 22 seconds left, Al Horford tipped in a Marcus Smart miss and the Nets were headed into the offseason.

“There’s a lot of stuff that may factor into why we lose,” Durant said. “But they were just a better team.”

Indeed. Have been for a while. But the season didn’t begin in January. It began in October, when Boston dropped its first two and was booed in its home opener. They played games in November, when the Celtics were steamrolled by Atlanta, Brooklyn and San Antonio and called a players-only meeting before the team’s eighth game of the season. Boston played 15 games in December. They won six of them. Celtics owner Wyc Grousbeck told SI last week that, back then, “it felt like a building year.”

Take Ime Udoka: Around Christmas, Udoka looked overmatched. This was the ex-Gregg Popovich assistant who seemed to think he was Pop, a taskmaster without the resumé to back it up. But Udoka stuck to his principles—and his switching defensive scheme—broke the Celtics of some bad offensive habits and turned Boston into a modern version of the early ’90s Pistons. Udoka won’t get a whiff of consideration for Coach of the Year but try to find one who has been more impactful.

Said Jayson Tatum, “I’m glad we got him.”

Or Marcus Smart. Smart appeared to be on thin ice when Brad Stevens took over as president of basketball operations last spring. Stevens soured some on Smart last season. Didn’t like his shot selection. Or his occasional immaturity. Entering the last year of his contract, Smart looked like a trade candidate. Instead, Stevens locked him up with a four-year extension, Udoka handed him the point guard position and Smart has thrived. He had 11 assists through three quarters in Game 4. He finished with one turnover. Irving shot 43% in this series. He has Smart to thank for it.

He still has the occasional head-scratcher—chasing an improbable steal on Durant late in the fourth quarter, leaving Irving open for a late three—but his productive, game-changing plays far outnumber the reckless ones. Udoka likened the Smart experience to Popovich’s with Manu Ginobili, a free-wheeling guard who played a key role in four Spurs championships.

“Pop would just say ‘That’s Manu being Manu,’” Udoka said. “You live with it because you know he’s going to end up making the right play more often than not.”

Tatum, already one of the NBA’s best scorers, improved as a passer. He handed out a career-best 4.4 assists this season. Against Brooklyn, he averaged 7.3. When the Nets weren’t worried about Tatum slashing to the basket or burying threes, they were frustrated by his willingness to make the extra pass. With the clock winding down in the second quarter, Tatum, reading a double team, whipped a pass to Grant Williams in the corner. Williams knocked down a three, extending Boston’s halftime lead to eight.

“I knew I had to be on top of my game in this series,” Tatum said. “But I wasn’t surprised by how I played. I do feel like I’m one of the best players.”

Jaylen Brown, who battled injuries and COVID issues early in the season, played like an All-Star in the second half. Robert Williams developed into a high-level two-way center. Grant Williams emerged as a versatile defender and an elite corner-three shooter. Al Horford, reacquired for Kemba Walker last summer, has been a steadying presence on both ends of the floor. The trade deadline deal that shipped out Dennis Schroder not only brought back Daniel Theis but opened up playing time for Payton Pritchard, who shot 47.3% from three after the All-Star break.

Four months ago, Boston looked like a lottery team. Today, they are a legitimate threat to win a championship. There’s a surliness to these Celtics. “It’s us versus everybody,” Smart said. “That’s the mentality that we have, and that’s the mentality that we’re going to keep.” They can defend anyone. Tatum could be the best player in any series—including a likely second-round matchup with Milwaukee. What once looked like a dysfunctional team, incredibly, might actually be the NBA’s best.