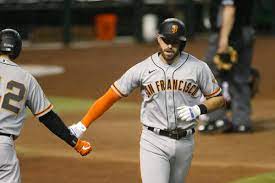 The Giants are coming off of a successful home stand and are hoping to carry that momentum into Arizona tonight as they face off against the Diamondbacks and their young starting pitcher, Taylor Widener. Widener has appeared in eight games this season, having been called up most recently in early July. The Diamondbacks have won two of three games since his return, and he enters tonight’s game with a 4.42 ERA, a 5.67 FIP and 36 strikeouts to 16 walks in 36.2 innings pitched.

Now, I know this is likely not the pitching match-up you were hoping to see with a game in Arizona, but just be patient, Madison Bumgarner is pitching tomorrow.

In the meantime, all eyes will likely continue to be on Kris Bryant, who made his Giants debut on Sunday with a home run in his second plate appearance, further cementing his place in the hearts of Giants fans.