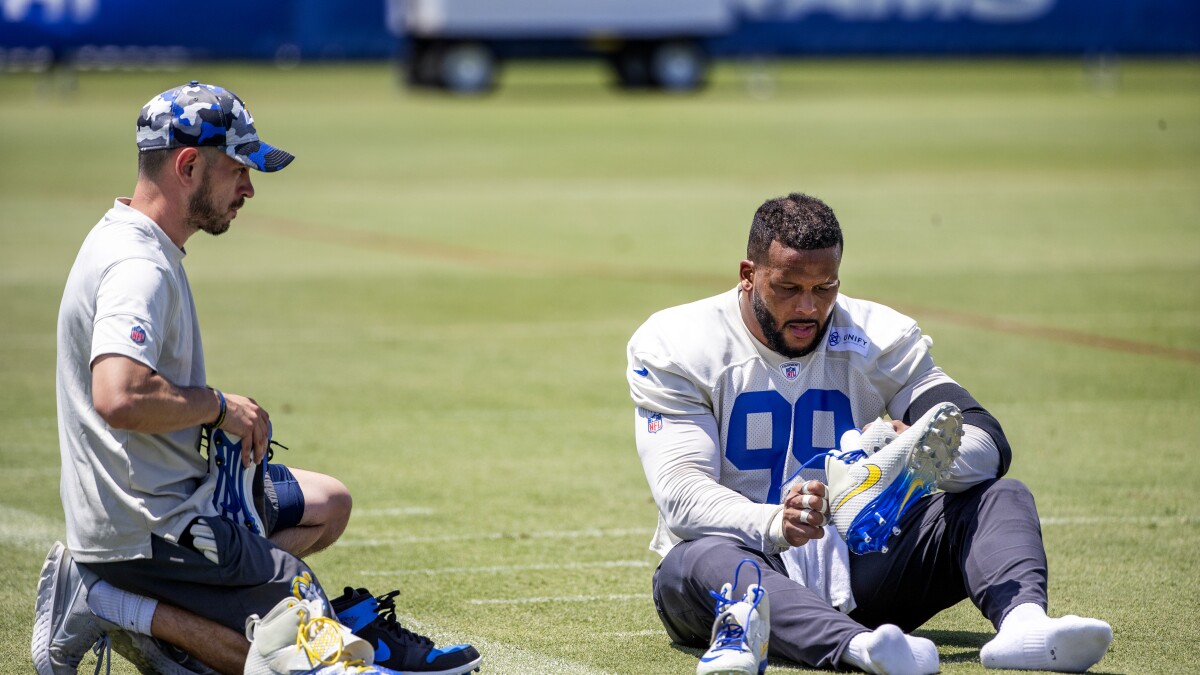 Before the Rams held joint practices with the Cincinnati Bengals, Rams quarterback Matthew Stafford made an optimistic prediction.
“As long as everybody keeps their head on straight and doesn’t go too crazy or we have to call practice earlier or whatever that is, I think it’s a positive,” Stafford said.

Tempers flared. Helmets came off and were swung. Punches were thrown and there was also kicking and shoving before Rams coach Sean McVay and Bengals coach Zac Taylor ended the workout prematurely.

On another warm and humid day, tempers rose on offense, defense and special teams. Rams defensive lineman A’Shawn Robinson and linebacker Justin Hollins were among players involved in skirmishes earlier in the practice, which was conducted on two fields.

The rising tensions culminated with a brawl that caused McVay to run from the far field in attempt to break it up. He emerged visibly angry, but later downplayed the emotion.

“I just see guys swinging and some guys have helmets on, some don’t, there’s a scrum, you just never know what can occur,” McVay said, “and my biggest concern in just unnecessary injuries for people that we’re counting on. … God forbid anybody gets hit in the head with a helmet off.”

A video appears to show Rams defensive lineman Aaron Donald with a Bengals helmet in his hand as he fell to the ground. Donald was scheduled to speak with reporters after practice but in the aftermath of the fight was not made available. He also, through a team spokesperson, declined a request to speak with reporters later at the team hotel.

McVay said he did not know “exactly what instigated” the brawl that ended the practice.

“I think in some instances teams defending each other,” he said. “Fortunately, my understanding is nobody got hurt and we’ll move on from it.

“Not going to make a bigger deal than what it is. Not going to look at pointing fingers.”

According to a report on NFL.com, individual teams, not the league, are responsible for overseeing conduct at practices.

The Rams are not strangers to brawls that end joint practices. Before last season, a workout with the Las Vegas Raiders ended early because of fights.

Players and coaches say they enjoy joint practices because, after weeks of competing against teammates in training camp, it provides starters an opportunity to go against opponents in a setting that ostensibly helps prevent injuries.

In the Rams-Bengals workouts, enthusiasm apparent on the first day gave way to frustration and anger on the second.

So, is avoiding a second day of joint workouts the solution?

“It’s hard to argue otherwise but to say it’s impossible, I wouldn’t say that,” McVay said. “There’s just so much, and so many things that go into the framework of a play, when there’s 22 moving parts and you can’t get to the bottom of all of it.

“And these are guys that are tough-minded individuals that, you know, if they feel like they’re disrespected, you know, it’s hard to say I don’t understand sometimes.”

Before the practice ended, Stafford was in the midst of two consecutive full days of work. It was another milestone of sorts for the 14th-year pro who is dealing with tendinitis in his right elbow.

“I feel good,” he said. “I feel like I can make all the throws. Now I’m just getting that opportunity to really kind of get into a rhythm, and get into a groove.”

The Rams open the season in two weeks against the Buffalo Bills at SoFi Stadium.

Gary Klein covers the Los Angeles Rams for the Los Angeles Times. Before that, he covered USC’s football program and athletic department. He began working for The Times in the San Fernando Valley edition and has reported on high school, college and pro sports. He grew up in Southern California and graduated from Cal State Northridge.