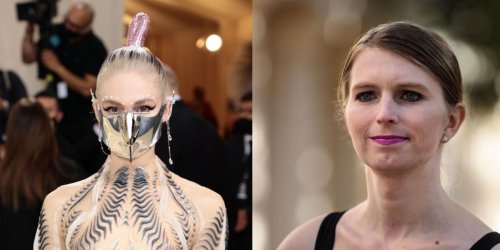 In yet another entirely unexpected turn of events, Grimes, fresh off her what is at least her second breakup from Elon Musk, is reportedly dating whistleblower Chelsea Manning. According to “Page Six,” they’re in a “serious” relationship and have “U-Hauled it,” meaning they currently live together in Austin. This is news to me, but I guess it’s somewhat less shocking to their closest Twitter followers since apparently they’ve been tweeting at each other for the past few months. Still, keeping up with Grimes’s romantic life is starting to give me whiplash.

Manning, you may recall, spent seven years in military prison for leaking government documents to WikiLeaks in 2010. Her sentence was commuted in 2017, but she was again imprisoned in 2019 for refusing to cooperate in a WikiLeaks investigation. She was released the following year after a suicide attempt sent her to the hospital. Neither party responded to a request for comment from “Page Six,” which I imagine is because they are busy coming up with a word vaguer than fluid to describe the nature of their relationship.

It’s been a busy week for Grimes, who revealed she had a second baby, had gotten back together with Musk, and then subsequently broken up with him again. Still no word on how Musk is feeling about this or whether it will impact his plan to bring Grimes and their children to Mars before 2030. Is there enough space beer for all of them?