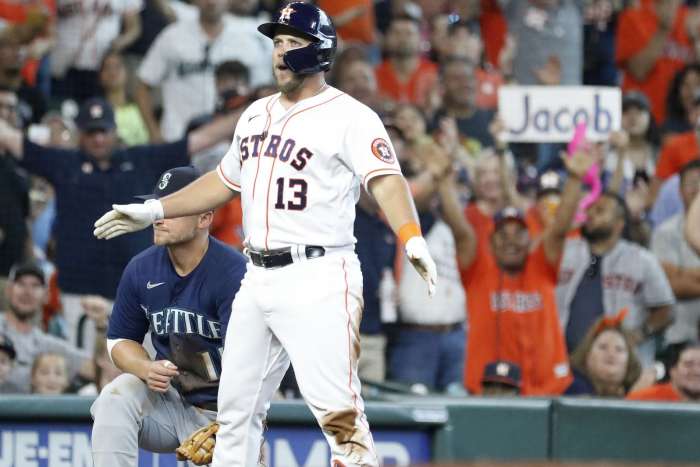 Before Monday’s game, Houston’s well-traveled manager harked back to two previous stops. Baker managed the Cincinnati Reds for six years. Siri entered the organization as a 17-year-old international signee during Baker’s final season at the helm. He became a heralded prospect before stalling out and spending time with three other organizations.

Baseball brought the two together in Houston, where Baker could rely on some Reds contacts for intel. They offered a brief scouting report with another familiar name for Baker.

“They were calling him Eric Davis Jr.,” Baker said before Monday’s game. “He was trying to hit like Eric, and it wasn’t working, so he changed his batting stance to combat his weaknesses. He performed well at the Triple-A level. We’ll just have to see, and hopefully he can contribute.”

Even though Siri, making his first major league start, homered twice in Monday night’s 15-1 romp over the Rangers, the Astros don’t need him to slug like Davis, Baker’s former player with the Giants. Davis earned two All-Star selections, won a Home Run Derby and finished a 17-year career with a .482 slugging percentage.

Something like Cedeño’s daredevil speed and stolen base prowess are far more meaningful for Siri, a 26-year-old minor league lifer on the fringe of playoff roster consideration.

Baker said he chose Siri to start over Chas McCormick on Monday due to Globe Life Park’s outfield dimensions and Siri’s speed. The skipper seems to beg for more team speed every time he’s afforded the opportunity.

McCormick, Jake Meyers, Kyle Tucker and Jose Altuve all possess above average sprint speed, but none seems to fit the mold Baker envisions. The foursome has combined to steal 21 bases. Myles Straw, traded to Cleveland in July, has 10 since departing.

Houston’s offense is not suffering for the lack of steals — it averaged 5.25 runs per game entering Monday — but the traits Siri provides can’t be found elsewhere on the roster.

Siri stole 24 of 27 bases successfully with Class AAA Sugar Land this season, upping his career total to 179. He’s been caught just 49 times. The Astros must consider it when constructing their playoff roster next month. October games can be decided by an extra base or a fearless decision to steal one.

“The thing about speed, we just have to get him on base to utilize it,” Baker said, “and hopefully be disruptive.”

Siri’s .369 on-base percentage at Sugar Land this season was more than 40 points higher than his career .321 minor league clip. Strikeouts are still far too common an occurrence. Swing decisions might be questionable. The Astros lowered Siri’s hands in hopes he could reach breaking balls he’d previously swung through and missed.

The playoffs could afford the Astros a chance to put Siri on base without a plate appearance, but expanded September rosters allow them to at least see what Siri might provide. Brantley missed his second straight game Monday with a right knee issue. He departed Saturday’s 4-2 loss against the Angels after three innings, forcing Siri into the first relevant playing time of his major league career.

Siri saw nine pitches before lacing his first major league hit against Angels starter Jose Suarez in the fourth inning. Siri took an enormous secondary lead immediately. Suarez threw over twice to keep him close. The third had Siri fooled. He broke for second base anyway and outran Jared Walsh’s throw. The sequence momentarily reinvigorated a listless Astros bunch and brought a new facet to a loaded team.

“That’s why I put him in,” Baker said afterward. “We needed a spark at that time.”