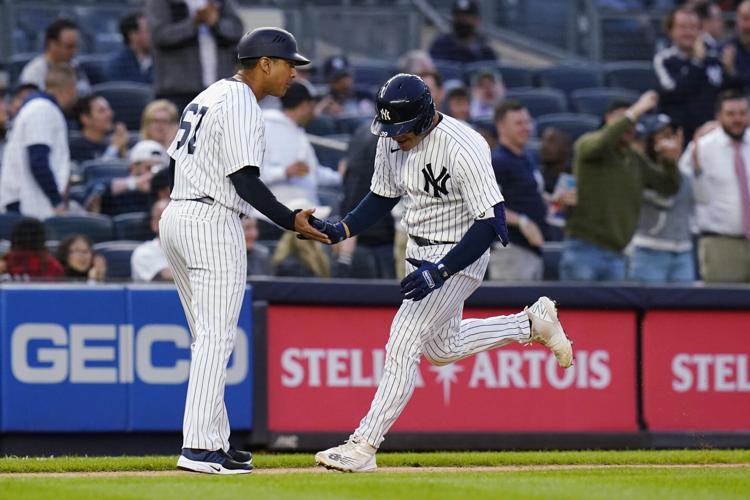 NEW YORK — Each of Jose Trevino’s walk-off hits have carried a measure of personal significance beyond the on-field celebration. His first came in 2018 with the Rangers, highlighting his first Father’s Day with a newborn at home; the second came last month on what would have been his late father’s birthday.

Friday marked young Josiah’s 4th birthday, so Trevino should have known there would be something mystical at work as he ascended the dugout steps on Friday at Yankee Stadium. After 13 innings, Dad delivered the game-winning hit, lashing a sharp single that decided a 2-1 Yankees victory over the Cubs.

“I don’t know what everybody believes in, but I know what I believe in,” Trevino said. “I believe I got a little extra help every time something like that happens.”

Trevino came through with the winning knock off Alec Mills, ending a night of offensive futility that had seen the Cubs (0-for-18) and Yankees (1-for-19, including Trevino’s hit) repeatedly fall short in knocking home runners from scoring position, even once automatic runners entered in extra frames.

“Just a great job of being ready,” Yankees manager Aaron Boone said. “A really good at-bat, got a pitch he could handle, and just stuck it.”

Josiah stayed up until the end, watching from the family’s Texas home. He chatted with Dad via FaceTime shortly after Trevino was mobbed by teammates between first and second base.

It was a fine gift to unwrap: the Yanks’ Major League-best 42nd victory and their ninth win in the last 10 games. To get it, they overcame bleary eyes after their charter flight from Minneapolis landed in Newark, N.J., just before sunrise, unaware that they were destined to play a four-hour, 16-minute marathon.

“It’s not ideal,” Boone said. “But one thing that struck me when we walked out 15 to 20 minutes before the game, there was a buzz in the crowd. Friday night, summer, Chicago Cubs in town. I felt like we fed off that energy a little bit, coming off a big comeback win and long travel.”

Trevino’s first walk-off as a Yankee came in the 11th inning of a May 24 game against the Orioles; his Rangers walk-off came on June 17, 2018, against the Rockies at Globe Life Park.

Largely unheralded at the time of his April 2 acquisition from Texas, the 29-year-old Trevino has quickly become a favorite among fans and teammates alike.

“At the beginning, when I saw we got Trevino, I thought it was a reliever from Oakland,” Luis Severino said with a laugh, referring to Lou Trivino of the A’s. “It was a great move for us. He’s been great all year. He’s a great catcher and he’s starting to hit.”

Added Gleyber Torres: “He’s amazing. As a player, Trevino believes in himself. He just enjoys the little moments the most. He’s a guy that every time he has the opportunity, he tries to do the job and play the best baseball of his life.”

Torres hit a fourth-inning home run in the contest, which tied for the longest in the Majors so far this season, equaling a 13-inning tilt between the Orioles and Rays on May 20 — an 8-6 Baltimore victory. Torres has 11 homers this year after slugging 12 over his previous two seasons.

Severino started for New York and struck out 10 over six innings of one-run ball, limiting Chicago to Jason Heyward’s fifth-inning home run. Assisted by a diving Aaron Judge catch in the third inning, Severino scattered seven hits and permitted one walk as the Yankees improved to 9-2 in his 11 starts this year.

“Oh yes; I was the happiest guy in the field today,” Severino said, referring to Judge’s catch. “It was a great play. The defense has been great all season.”

Yankees relievers combined to permit just two hits over seven scoreless innings, with Ron Marinaccio hurling a scoreless 13th to pick up his first Major League victory. Yankees relievers have not permitted a run in their last 14 2/3 innings, since the eighth inning on Wednesday at Minnesota.

“Our defense played well tonight,” Trevino said. “Our bullpen did what they’ve been doing; coming in, throwing up zeros and giving us a chance to win the game. I thought that kind of carried us over. We just needed one hit.”