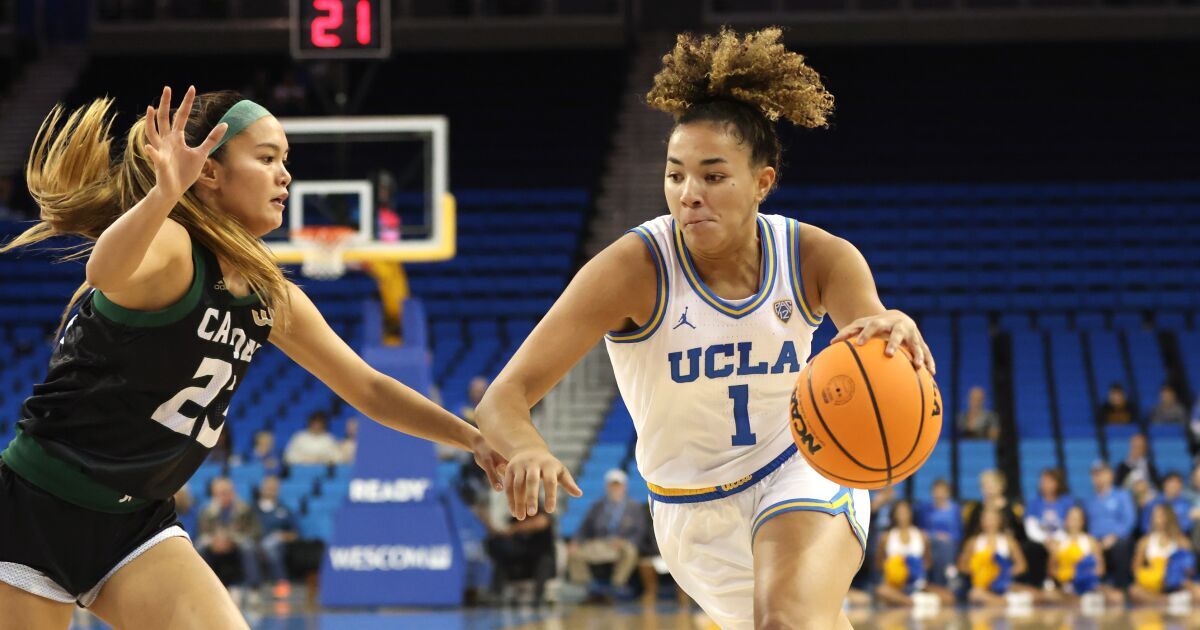 LOS ANGELES – The UCLA women’s basketball team improved to 1-0 after taking down Cal Poly 84-48 behind Charisma Osborne’s 20-point, nine-rebound performance Monday night. Osborne was a perfect 6-for-6 from the charity stripe and added five helpers in an impressive start to her senior campaign.

All 10 Bruins who hit the hard court scored in the season opener, and each player tallied more than 10 minutes of playing time. Four Bruins ended with double-digit scoring totals; Osborne (20), Bessoir (14), Rice (12), Jaquez (10).

Kiki Rice made an impressive college debut, racking up 12 points and throwing seven assists to her newly minted teammates. The Maryland native played a team-high 28 minutes in the game as UCLA’s primary floor general.

The Bruins out-rebounded the Mustangs 48-28 in the Monday evening matchup and took an advantage in the turnover battle. UCLA nabbed 10 steals in the win and outscored Cal Poly 26-15 off turnovers.

Redshirt-sophomore Emily Bessoir led the way for the Bruins in the first quarter, scoring UCLA’s first four points to ignite the Bruin offense. Bessoir was 3-for-4 in the quarter, sinking a triple and grabbing five rebounds in nine minutes of play. Gabriela Jaquez (10 points, six rebounds) hit a three-pointer for her first collegiate points, and Charisma Osborne followed it up with a three of her own en route to an 11-0 Bruin run. Rice tallied four of her seven assists in the first quarter.

Rice found her offensive rhythm in the second period, shooting 3-for-3 from the field and adding a pair of free throws in the quarter. Senior Brynn Masikewich contributed five points and grabbed five rebounds in the second quarter, setting career-highs in both categories. The Bruins led 45-25 going into the break.

UCLA kept its foot on the gas in the third quarter, outscoring Cal Poly 24-15 in the period. Osborne had a perfect quarter, shooting 2-for-2 from the field and 2-for-2 from the line without committing a foul or a turnover. The senior’s seven points helped lift the Bruins to a 69-40 lead through three.

The Bruins held the Mustangs to just eight points scored in the final quarter of play, stifling any hope of a Mustang comeback. All 10 Bruins saw action in the fourth quarter, and five UCLA players scored during the final 10 minutes.