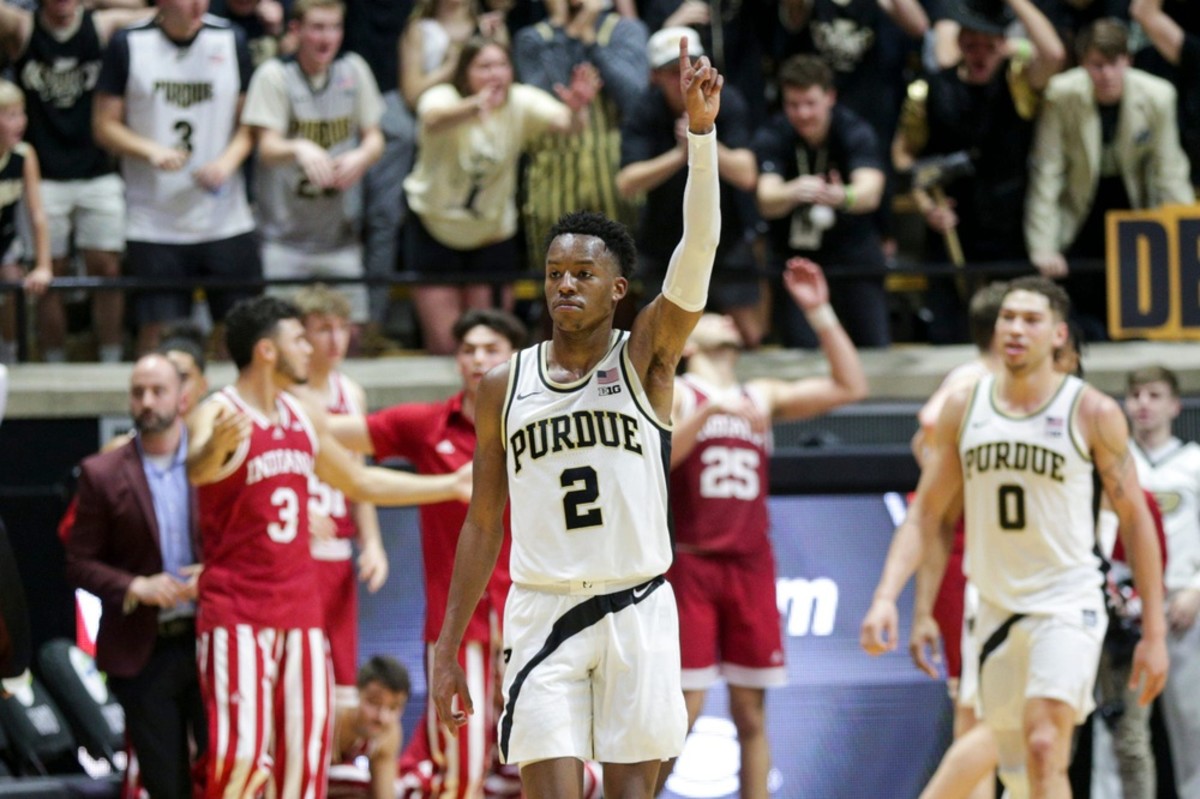 Purdue basketball fell short of its goal to bring home another Big Ten regular-season title. But opportunity looms large as the team prepares for the 2021-22 Big Ten Men’s Basketball Tournament.

With a No. 3 seed in the event, the Boilermakers earned a two-round bye and will tip off at 9 p.m. ET on Friday against either Ohio State or the winner of a matchup between Penn State and Minnesota inside Gainbridge Fieldhouse in Indianapolis.

Purdue struggled away from West Lafayette to end the year, dropping back-to-back games on the road against Michigan State and Wisconsin, stripping the team of its chances to be crowned Big Ten champions.

Costly losses are often deflating, especially for a team that entered the season with colossal expectations. But the Boilermakers found a way to finish the regular season with a victory over rival Indiana at Mackey Arena, improving to 25-6 and 14-6 in conference play.

The team still has one more shot to win a Big Ten title, and the path to climbing atop the conference once again has already been laid out.

“I think every team needs to go through some adversity,” Purdue senior center Trevion Williams said. “It makes them stronger in the end. It would have been nice to go into the Big Ten Tournament with a Big Ten championship, obviously sharing it with Wisconsin. Things didn’t go our way, and we’re trying to pick ourselves back up.”

Having a double-bye allocates the team two extra days to prepare, allowing it time to continue assessing its own weaknesses. Whether its shooting woes or defensive lapses, the team is looking to clean up its schemes in order to fuel a postseason surge.

But coach Matt Painter said Purdue isn’t performing at an acceptable level defensively heading into the tournament, yet the team is better in that aspect than it was three weeks ago.

The Boilermakers allowed more than 70 points just once in the six games following an 82-58 loss to Michigan on Feb. 10. But they were plagued by turnovers in several close contests.

“I think that’s really going to be a big push for us here in the last week going into the Big Ten tournament,” Painter said. “Just keep things simple, take what the defense gives you, and let’s have a lot of fun with it.”

In the back of their minds, the Boilermakers know just what can come from a strong Big Ten Tournament push. Victories against quality teams would bolster Purdue’s NCAA Tournament resume, potentially lifting it to a higher seed.

“When you put yourself in a position to be in the NCAA Tournament, and you have a chance like us in the Big Ten tournament to jump up a seed or wherever it may be, get some good quality wins on a neutral floor, it’s really important,” Purdue senior guard Sasha Stefanovic said. “No matter who you’re going to face, you’re going to face a good opponent.

“It’s important for us, we’re really focused in, and we’re going to do everything we can to get a championship.”

PURDUE BIG TEN TOURNAMENT HISTORY: Purdue has a 14-22 all-time record in the Big Ten Men’s Basketball Tournament. The Boilermakers won their first and only tournament championship in 2009.

PURDUE FAVORED TO WIN 2022 BIG TEN TOURNAMENT: Illinois and Wisconsin might be the top two seeds in this week’s Big Ten Tournament, but it’s the No. 3 seed — the Purdue Boilermakers — who are the odds-on-favorite to win the event, according to the SISportsbook.com gambling website.

BIG TEN TOURNAMENT SCHEDULE: Purdue basketball will play its quarterfinal game in the Big Ten Tournament on Friday, March 11, at 9 p.m. ET at Gainbridge Fieldhouse in Indianapolis. The team will play either Ohio State, Penn State or Minnesota.