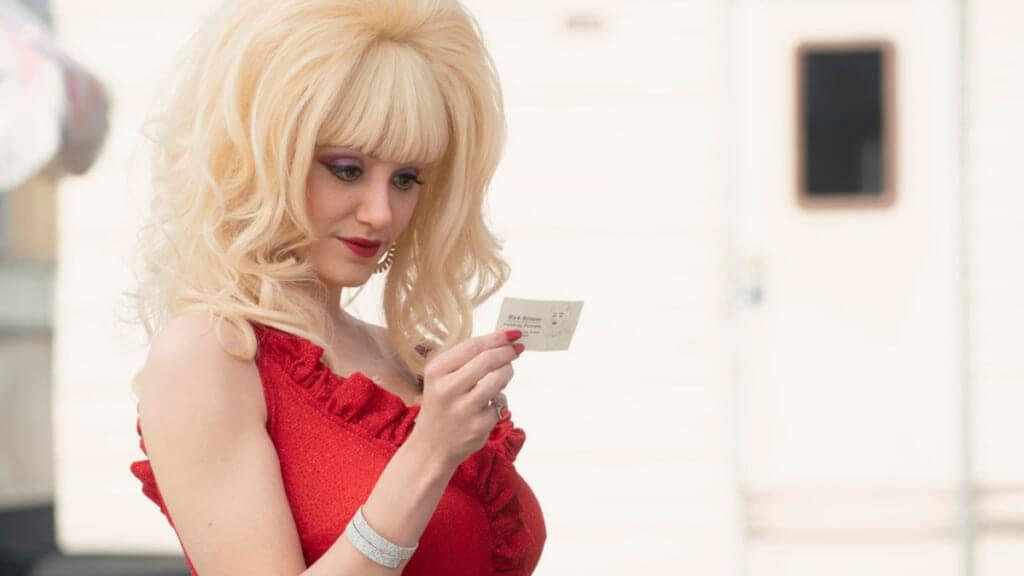 Ever since a series of mysterious billboards featuring the blonde bombshell appeared in 1984, Angelyne’s been an L.A. icon.

“She’s the original influencer,” says Emmy Rossum, who portrays her in the Peacock original series Angelyne (May 19). “There would be no Kim Kardashian or Paris Hilton if Angelyne hadn’t done the brick-and-mortar version that captured an entire city’s attention.”

Rossum’s fascination with Angelyne started when she was 13.

In a May 1987 profile, the star traces her career to a “previous manager [who] papered Hollywood with 2-by-3-foot posters of Angelyne. Then her current manager began buying up billboards and plastering even larger portraits of the would-be star around town. One billboard made it into the opening montage of the ‘Moonlighting’ television show; another picture was featured in National Geographic magazine — ‘Just me! I’m part of the Hollywood scenery!’ she said with a laugh.”

1996 marked the 15th anniversary of Angelyne’s billboards, joining several other notable American birthdays that year, according to The Times — including Harley-Davidson, Frederick’s of Hollywood and the National Enquirer.

One of the things the series does so well is show how Angelyne is self-made.

“Her fierce commitment to the hyper curation of her image in a way that feels incredibly authentic to her is admirable and inspiring.”

But the mystery behind the singer, actress and model is part of what keeps people endlessly intrigued by her.

“Who else is able to zip around in this pink Corvette, spark joy and have people make wishes when they see you? She is like Tinkerbell. She really is L.A.’s unicorn.”

A 2002 profile sums up her fame — if not exactly her business model: “Since the 1980s, billboards have gone up on the Sunset Strip, La Brea Avenue and other famed corridors advertising Angelyne’s name, canyon-like cleavage and phone number. If curious motorists call that number, they’ll reach Angelyne Management, where she has several full-time employees dedicated to selling the sizzle to her steak.

“An actress with a handful of screen credits, including “Earth Girls Are Easy,” Angelyne has become an L.A. icon through her billboards. They have had a better film career than she has, appearing in “Get Shorty” and “Volcano” as well as TV’s “The Simpsons,” “Moonlighting” and “Futurama.” She claims a fan club of more than 22,000 and has appeared in magazines from National Geographic to People. Angelyne is also an occasional pitch woman for the La Brea Chevrolet dealership, which sells Corvettes.”

Among about 500 people cited was the painter a mural of Angelyne on the side of a building near Hollywood Boulevard and Vine Street, for failing to secure approval from the city’s Cultural Affairs Commission: “The mural was commissioned by an actress calling herself Angelyne — she refuses to give her last name — to attract job offers.”

September 1987: Catching up with ‘the Patron Saint of a certain side of L.A.’

“I loathe the heat,” Angelyne tells The Times from the set of “Earth Girls Are Easy.” “I’m a pampered pussycat and I don’t like to be uncomfortable.”

April 1995: Novelist Ajay Sahgal goes in search of the real Angelyne — and documents his failure

“Other rumors: Angelyne has a rich Turkish boyfriend who pays for all her billboards. Some people say it’s an Arab sheik. She’s dated Charlie Sheen. She’s dated Madonna. She is mobbed by adoring fans and Japanese tourists wherever she goes. She lives in Studio City. She lives in Beverly Hills. She’s a Scientologist. She’s a lesbian. She’s a man. The rumors can’t possibly all be true.”

August 2002: Angelyne moves from the billboard to the ballot

“Angelyne, the age-concealing actress who has appeared in the film ‘Earth Girls Are Easy’ and a Moby music video, filed her candidacy papers Friday, along with 19 other council contenders [in the proposed city of Hollywood]. The documents included a statement that said she has no reportable assets, despite those billboards of her that began popping up in the 1980s. In an interview, she insisted she is serious about making Hollywood better: ‘I’m Angelyne. I’m the image of Hollywood. I want Hollywood to rise to my occasion.”

“Among the last to join a crowd of would-be governors that already featured Hustler magazine boss Larry Flynt and billboard pinup Angelyne were a travel agent, a sitcom writer, a structural engineer, a sumo wrestler and radio personality Jim ‘Poorman’ Trenton, who called his campaign ‘a good way to meet women.’”

“Running on the campaign slogan, ‘We’ve had Gray, we’ve had Brown, now it’s time for some blond and pink,’” The Times remembered in a 2007 story, “she finished 28th.”

March 2008: Angelyne joins the race for honorary mayor of Hollywood

“Bodacious billboard queen Angelyne wants to become the next star of Hollywood’s Walk of Fame. Not with a bronze plaque embedded in Hollywood Boulevard’s terrazzo sidewalk. But as the person who presides over Tinseltown’s biggest tourist tradition. Civic leaders are searching for a new honorary mayor who can help choose Walk of Fame honorees and then stage glitzy star unveilings in a way that makes celebrities and onlookers alike feel special.

“Longtime Honorary Mayor Johnny Grant had that knack during the 28 years he helped run the Walk of Fame and emceed its sidewalk ceremonies for the Hollywood Chamber of Commerce. He died Jan. 9 at age 84. Though the selection could be months away, three front-runners have emerged: Angelyne, longtime Hollywood radio personality Gary Owens and ‘Let’s Make a Deal’ game-show host Monty Hall.”

“As part of a legal settlement with developers of the W Hotel project near Hollywood and Vine, the Tinseltown icon will maintain the same business address she has used for the last 19 years — despite the fact that it was destroyed by the wrecking ball… Angelyne charged that the agency and developers left her stuck with thousands of photos, posters and other ‘Angelyne Fan Club’ materials imprinted with the defunct Selma Street mailing address.”

“[Angelyne] alleges that the Los Angeles Community Redevelopment Agency reneged on a promise to let her keep her longtime mailing address after evicting her to make way for a new Hollywood luxury hotel project. As a result, fan mail is being stamped ‘return to sender’ and is not delivered….

“‘I get at least 10 letters a day from people wanting my merchandise,’ Angelyne said. ‘But then it stopped. Finally one fan saw me in person and mentioned that his letter had been returned to him.’ After that, she and an assistant mailed a series of test letters to the Selma address. All were sent back as undeliverable by the post office — which routinely forwards mail for a maximum of one year.

“Two weeks ago, Angelyne complained to the redevelopment agency and demanded it pay $403,566 so that photos, posters and other promotional materials bearing the old Selma address can be reprinted. She also asked for $50,000 in compensation for loss of business.”

“I knew as a 3-year-old that I could run the world and do a great job,” Angelyne tells The Times in response to our meet-the-candidates questionnaire. “So why not California? I’m already Queen of the Universe, so governor is a piece of cake.”