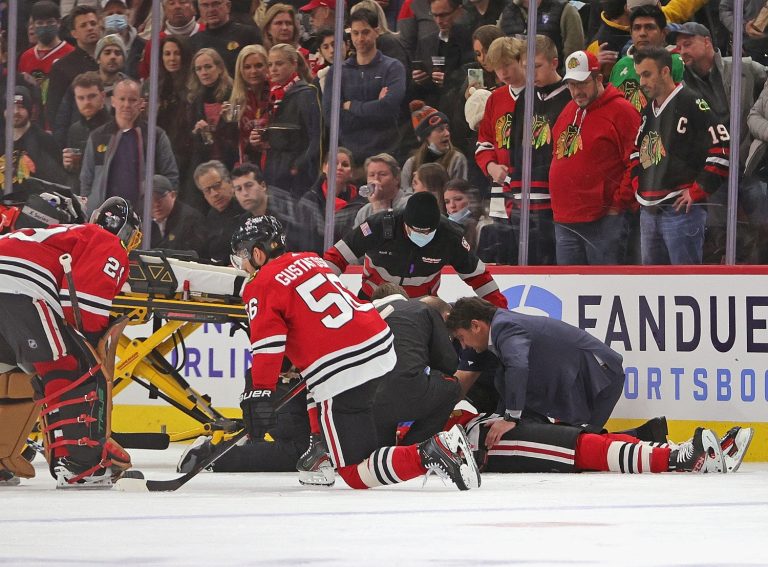 By the time Chicago Blackhawks forward Jujhar Khaira saw New York Rangers defenseman Jacob Trouba, it was too late. The result was a huge hit that sent Khaira to the hospital.

Khaira was stretchered off the ice after he was leveled by Trouba in the second period of New York’s 6-2 victory Tuesday night.

The Rangers also beat the Blackhawks 3-2 on Saturday night in New York. Their second matchup in four days was overshadowed by Trouba’s big hit on Khaira in the second.

“It’s a bad effect. I didn’t feel too good and I know our player didn’t feel too good, either,” New York coach Gerard Gallant said. “It’s a part of hockey, it’s a big hit, but I don’t think it helped the game. To see a guy like that, it’s hard to look at.”

Khaira’s head was down as he gathered in the puck, and he looked up right as Trouba appeared to drive his right shoulder into his chin. Khaira’s head bounced hard off the ice, and there were no signs of movement from him as the Blackhawks and Rangers scuffled nearby.

A stretcher was wheeled onto the ice, and medical personnel worked on Khaira as each team looked on from the bench area. A handful of his teammates and the Rangers tapped the stretcher as Khaira was taken off.

The Blackhawks said Khaira suffered an “upper-body blow” and was taken by ambulance to a hospital.

“He’s up, he’s talking, he’s very responsive,” interim coach Derek King said. “I think he wants to get back on the ice. He’s done some tests already, as far as what the doc told me, but he has some more tests to be done. So we won’t know the extent of the injury until after these tests.”

Kirby Dach and Erik Gustafsson scored for Chicago, which had won two of three. Marc-Andre Fleury made 24 stops in his first try at his 500th career win.

The game was tied at 2 when Kreider tipped Adam Fox’s power-play shot through Fleury’s legs for his 17th goal 4:59 into the third. Fox picked up his second assist when Rooney scored on a wrist shot at 12:10. Panarin added an empty-netter with 3:10 left, and Goodrow scored from in front with 1:19 remaining.

“The further we go into the game, we start playing better,” New York forward Mika Zibanejad said. “We give ourselves a chance to win every night.”

Panarin has five goals and nine assists in his last seven games. He had a goal and two assists in Saturday night’s victory over Chicago.

“He was unbelievable today. A big game for him,” Zibanejad said.

The Blackhawks played without Connor Murphy, Jake McCabe and Caleb Jones, three of their top defensemen. Murphy missed his third straight game because of concussion protocol. McCabe also missed a third consecutive game for personal reasons, and Jones was out because of a non-COVID-19-related illness.

Murphy and McCabe participated in Chicago’s morning skate and could return on its two-game road trip in Canada.

New York jumped in front when Trouba got a pass from Panarin and beat Fleury from the right circle 1:01 into the first. It was Trouba’s fourth goal in his last seven games and No. 5 on the season.

Chicago tied it 43 seconds later when Gustafsson’s wrist shot from just inside the blue line got past a screened Georgiev. It was Gustafsson’s first goal since Feb. 24 for the Flyers against the Rangers.

Dach made it 2-1 when he jumped on a loose puck and beat Georgiev to the glove side on the ice at 7:09. It was Dach’s first goal since Oct. 27, stopping a 17-game drought.

The Rangers’ Nov. 28 game against the New York Islanders has been rescheduled for March 17. The game was postponed because of a COVID-19 outbreak with the Islanders.

Blackhawks: At the Montreal Canadiens on Thursday night.