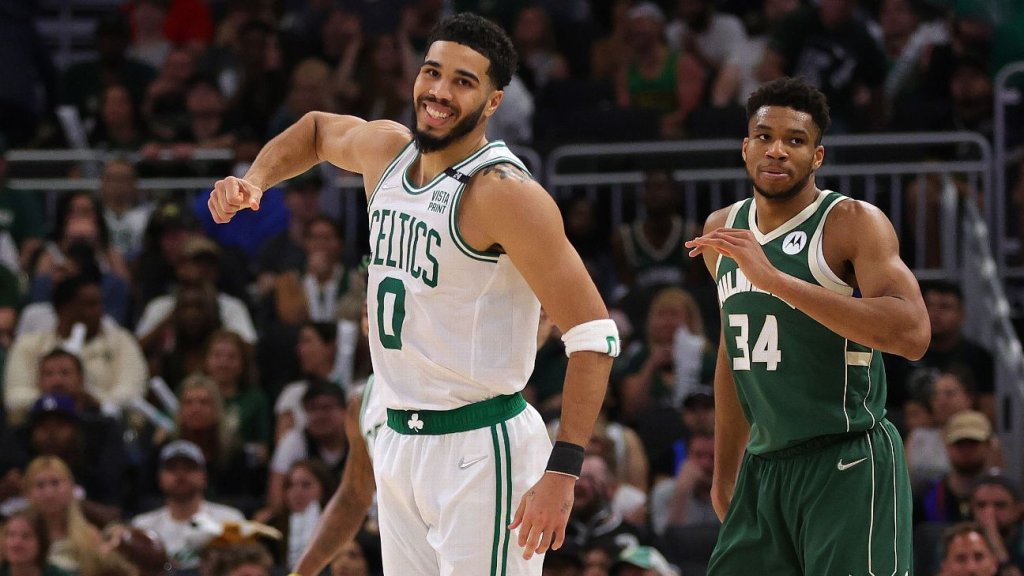 MILWAUKEE — Jayson Tatum wasn’t about to let it happen again. Two nights prior, the Boston Celtics had a prime opportunity to take control of the NBA playoffs semifinal series but let Game 5 slip through their hands. That wasn’t the case on Friday.

As the Milwaukee Bucks made a push in the fourth quarter, Tatum seemingly had an answer at every turn. Tatum scored 28 of his 46 points in the second half, including 16 in the fourth, as Boston held on for a 108-95 victory at Fiserv Forum.

“That’s why he gets paid the big bucks,” Celtics guard Marcus Smart said. “That’s it right there. For moments like that. I was telling him the whole game, just be you man. He was. That’s what he gets paid to do. That’s what we that’s what we lean on him to do.” Giannis Antetokounmpo vs. Jayson Tatum – a rivalry that could determine the East for years
5hBrian Windhorst

Milwaukee cut the lead to as little as four, but whenever the Bucks had momentum going, the thought of what happened in the previous game started to creep into the collective minds of the Celtics’ bench. Boston coach Ime Udoka said he told his team to not get stagnant in the fourth quarter as they did a game ago and continue to go on the attack.

“We had the right resolve,” Udoka said. “We talked about after that game. We let an opportunity slip away but still had a chance to make it a better story, I guess. We felt good going into it because we played so well for three and a half quarters.

“Everyone was pissed about that outcome, but we knew how well we played throughout the series and let some things slip away. But never any doubt or hangovers from that game. We put it to bed the next day and look forward to getting back to the Garden.”

After the Bucks closed it to 85-81, Tatum responded with a midrange jumper as the shot clock ticked down off an out-of-bounds play. When Milwaukee answered with an acrobatic layup from Pat Connaughton, Tatum answered with a 3-pointer. Boston’s next time down, Tatum showed off his footwork to hit a one-legged fadeaway.

With 5:40 left, he nailed another deep trey to push the lead to eight. And with 2:38 left, Tatum converted an old-fashioned three-point play to put the game out of reach. Tatum said the collapse of Game 5 was on the minds of all the Celtics down the stretch.

“I think just kind of how much it stung losing that game like that,” Tatum said. “Everybody had a bad taste in their mouth. Watching film, learning from it. The eagerness. We were upbeat. We weren’t defeated. Knowing that we still had an opportunity to save our season to come in here and get a win. We believed that. We truly did. We believe in each other and I think it showed tonight.”

Smart played a big role in the Game 5 loss, getting blocked by Jrue Holiday and getting the ball stolen from him by Holiday in the final 10 seconds. He said immediately following that game, he went to the practice facility to get ready for Game 6.

“I’ll just say tonight will be the first night after that game that I’ll get some sleep,” Smart said. “I haven’t been some sleep yet.”

Smart started the game like someone who wanted to forget his last game as quickly as possible as he had 14 points in the opening frame while shooting 4-of-6 from deep.

“I had to come set the tone,” Smart said. “We go as I go. I’m the heart and soul of the team. My teammates say that to me all the time. I try to be that for them. The energy that I bring is contagious. I know that. I try to bring that every game.”

Jaylen Brown has been around for plenty of big games by Tatum, but he knew this one carried a little bit more weight.

“It was a big-time performance,” Brown said. “Our backs are against the wall, too. You love to see JT come out aggressive and carry us offensively like he did forcing Game 7. Definitely a signature game for the Celtics and for Jayson.”

Tatum, Brown and Smart combined for 89 of Boston’s 108 points as Brown went for 22 and Smart had 21. The trio combining for 82.4% of the Celtics’ points marked the second-highest percentage by a Boston trio in postseason history behind only Dave Cowens, John Havlicek and Jo Jo White scoring 80 of 91 points on April 20, 1973, according to ESPN Stats & Information research.

“Al hurt them early in the series, and they tried to take that away, but it opens up other things for other guys,” Udoka said. “We know we can take advantage of those.”

With the win, the series heads back to Boston and TD Garden. But maybe home court won’t be such an advantage. The road team has won four of the six games in the series, including each of the past three. Still, the series comes down to one very meaningful game, something the Celtics players can’t wait to be a part of.