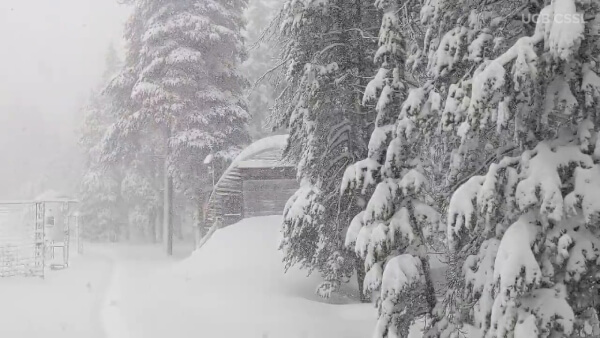 Christmas is getting closer and hopes of snow blanketing the landscape for the holiday are growing. Winter Storm Elliott along with arctic cold will likely bring a white Christmas to areas that haven’t seen one over the past couple of years.

In meteorology, a white Christmas occurs when there is at least 1 inch of snow on the ground on Christmas morning. It doesn’t have to be snowing on the holiday for that to happen.

The best chances for an inch of snow blanketing the ground on Christmas morning is in the higher elevations of the West and from the Northern Plains and Midwest into the eastern Great Lakes and portions of the interior Northeast. H​owever, areas from the southern Appalachians into the Ohio Valley and Central Plains could also see a white Christmas.

Winter Storm Elliott has brought snow to many of these areas over the last couple of days and any snow that falls this week will not melt before Christmas due to the cold blast associated with the storm.

How Typical Is A White Christmas?

The map below shows the locations with a historical chance of a white Christmas in any given year. The chances are based on averages from 1991 to 2020.

There isn’t much territory outside the Mountain West, the far northern tier and northern New England where the odds of a white Christmas are higher than 50%.

The last few years are good examples of how limited snow cover can be on Christmas morning.

Christmas 2021 had the third-lowest snow cover in the Lower 48 in the last 10 years, with just 26.6% of the contiguous U.S experiencing a white Christmas. Snow cover was only found in the West and across the far northern tier. This is not surprising given how December 2021 was the warmest December on record.

C​hristmas 2020 had the second-least-expansive Christmas snow cover since 2012, with just 26.5% of the Lower 48 covered in snow. That snow cover did extend farther south than typically is expected into the southern Appalachians.

Almost half of the U.S. had snow on the ground on Christmas morning in 2017. That year, snow covered the northern tier as expected and reached portions of the Central Plains, Midwest and Northeast.

The annual probability is based on data from the National Weather Service from 1991-2020.

Last Christmas, Albany and Syracuse had an inch of snow on the ground Christmas morning, making it an official white Christmas.

The record snow depth in Boston on Christmas morning is 11 inches (1995). Concord, New Hampshire, has measured up to 26 inches on the ground (1970). Last Christmas, Boston didn’t have snow, but Concord had 6 inches. Providence reported 2 inches, with a trace of snow falling on Christmas.

Most of the region didn’t see a white Christmas last year because the snow was confined to the northern Great Lakes. Marquette, Michigan, observed 5 inches of snow on the ground with a trace of snow falling on Christmas.

In 2020, Minneapolis measured 8 inches of snow on the ground on Christmas morning. Des Moines, Iowa, and Omaha, Nebraska, also had a white Christmas in 2020.

The highest snow depth on Christmas morning in Tahoe City, California, is 52 inches (1970). Denver’s record is 2 feet (1982). No snow was on the ground the past four Christmases in Denver, but Tahoe City had 31 inches last Christmas.

Five years ago, Seattle and Portland both experienced their sixth white Christmases on record. Seattle had 2 inches of snow that Christmas morning.

In Alaska, Anchorage and Fairbanks unsurprisingly both saw a white Christmas last year, with 13 inches and 21 inches on the ground, respectively.

Yes, It Has Happened in the South

Christmas snow cover isn’t just a northern thing. Some years, parts of the southern U.S. have marveled at the sight of a white Christmas. But it’s been more than 10 years since a white Christmas was observed in most of the South.

The greatest Christmas snow depth in both Memphis (10 inches) and Nashville, Tennessee (6 inches), happened in 1963.

-In 2009, Oklahoma City had a snowstorm of record (13.5 inches) and one of only two white Christmases on record occurred in Dallas (2 inches).

-In 2004 in Texas, Corpus Christi had a record snowstorm (4.4 inches), and Brownsville (1.5 inches) had its first day of measurable snow since 1895. Brownsville is on the same latitude as Miami, Florida.

-In 1989, a pre-Christmas snowfall was followed by a strong arctic cold outbreak that brought both Charleston, South Carolina (4 inches), and Savannah, Georgia (2 inches), their only white Christmases. Jacksonville, Florida, missed a white Christmas by a day when an inch of snow fell Christmas Eve morning. It had melted by Christmas Day.