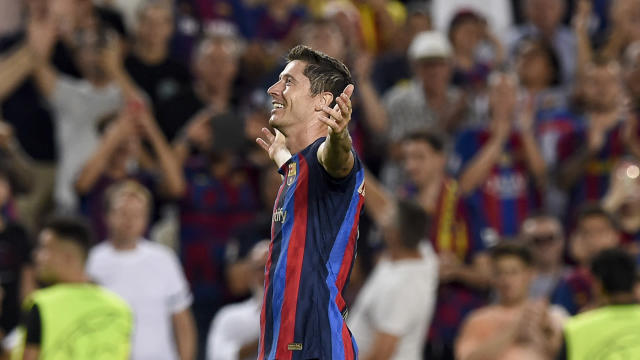 FC Barcelona coach Xavi Hernandez laughed off the notion that playing at Bayern Munich is like visiting the ‘house of horrors’ ahead of Tuesday’s mouthwatering Champions League Group C clash.

They met in last season’s group stage, with the Germans twice winning 3-0, although Barca are now a very different side and spearheaded by striker Robert Lewandowski, who moved to the Nou Camp from the Bavarians in the close season.

Barcelona have never won at Bayern, who have triumphed in the last four meetings between the clubs with an overall score of 17-4, including an 8-2 thrashing in the 2020 quarter-finals. While Xavi acknowledged the task in front of Barca is daunting, he said his side should have no fear going to Munich. ‘I wouldn’t call it the house of horrors – it’s just Bayern’s ground,’ Xavi said. ‘I’ve seen both sides of the coin, beating them heavily and losing heavily against them, but we have never won at the Allianz and this speaks of how difficult a place it is to go and the task at hand, but we’re optimistic. ‘We can’t be over-confident just because we’ve had good results lately. We need to remember what it was like playing against them last year, but I’ll be happy if we play to our potential and if we do that then I think we can win and change history.’

The Spaniard has a fully-fit squad for the game against Julien Nagelsmann’s side and is expected to recall Jules Kounde, Eric Garcia, Pedri, Ousmane Dembele and Lewandowski, who all started on the bench in Saturday’s 4-0 win at Cadiz.

December 2021: Bayern 3-0 Barcelona, matchday 6 Group E
The last meetings between the European giants came last December at an empty Allianz Arena (as a Covid-19 precaution) where the German side condemned the Catalans to Europa League and a third place finish in the group. Goals from Sane, Muller and Musiala were enough to see the Bundesliga giants to secure three points and a 100% group stage record.

September 2021: Barcelona 0-3 Bayern, matchday 1 Group E
The gulf in class between Barcelona and Bayern was clear to see from the off last season with the German’s outclassing the Catalans with three goals without reply from the Bavarians exposed the distance between both teams. Robert Lewandowski was on target twice against, what would be his future side with Thomas Muller opening the score just after he half hour mark.

August 2020: Barcelona 2-8 Bayern, UCL 19-20 quarter-final
Possibly the lowest point for the club this decade as the Catalan side were humiliated at an empty Estadio da Luz in Lisbon with the pandemic forcing UEFA to play the final games of the competition in a ‘bubble’ in the Portuguese capital.

The German side were five goals ahead at the break and the effect and impact of the result saw immediate changes at the Catalan club with sporting director and head coach Eric Abidal and Quique Setien exiting following Barcelona’s biggest defeat for 69 years.