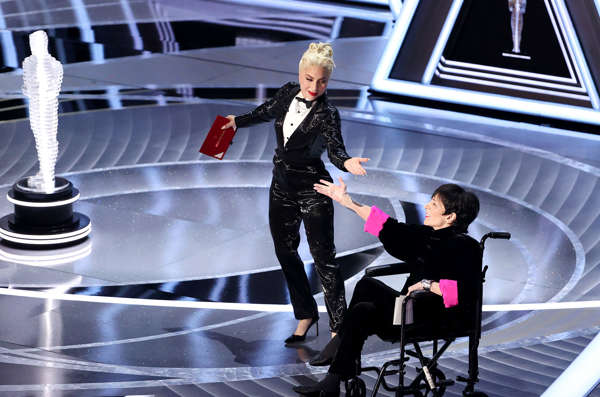 Liza Minnelli, who won the lead actress Oscar nearly 50 years ago for her performance in “Cabaret,” presented the award for best picture Sunday night with a lot of laughter and a little extra help from Lady Gaga, who eased the 76-year-old through a few rocky moments on stage.

“Oh! It’s so exciting,” Minnelli exclaimed as the two women took the stage to a huge round of applause after Jessica Chastain won lead actress and finished her speech.

“You see that,” Gaga asked as she walked over to where Minnelli sat in a wheelchair. “The public, they love you.”

Minnelli laughed as Gaga called her a legend and acknowledged her 1973 Oscar win for her work in 1972’s “Cabaret.” Then they got down to business.

“Throughout the night we’ve seen highlights of the 10 best … you know … nominated for best picture awards,” Minnelli said. “Now we’re gonna do something else. And then we’re gonna tell you who it is.”

“We’re gonna see who the nominees are right now,” Gaga said, speaking over Minnelli, who jumped in with, “Oh good!”

The two exchanged “I gotcha” and “I know” as the nominees were read. When the list was done, Gaga sang to Minnelli, who said, “I’m so happy to be here, and especially with you! I’m your biggest fan.”

Then it was time to announce the winner. Gaga spoke the obligatory words, “And the Oscar goes to.” Then she opened the envelope for Minnelli, who did the important part.

And then, as the cameras shifted focus to the night’s final winners, Gaga and Liza were gone.