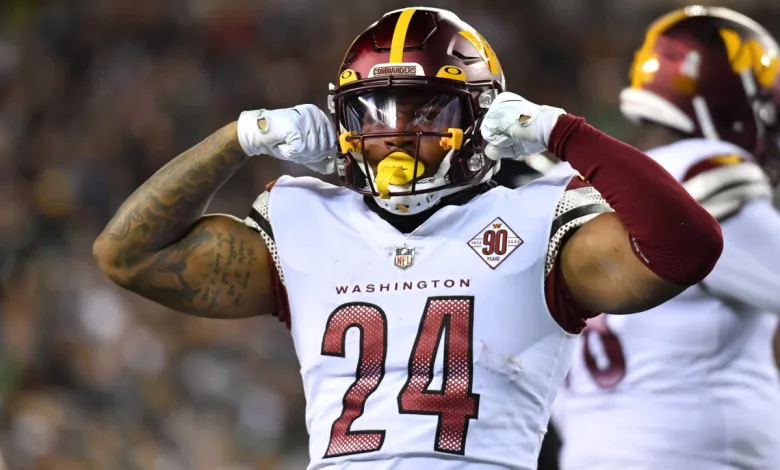 Philadelphia’s dreams of a perfect season have been shattered.

The Eagles’ first loss of the campaign came in stunning fashion on Monday night as they fell, 32-21, to the Commanders. It was a wild, back-and-forth game full of refereeing controversy, but ultimately Philly couldn’t overcome a number of self-inflicted wounds.

Two fumbles by Dallas Goedert and Quez Watkins in the 4th quarter proved to be the pivotal plays of the game. However, Goedert was the victim of a blatant face mask just before he coughed up the football, leaving the fans at Lincoln Financial Field furious.

But the Eagles had only themselves to blame after an unnecessary roughness penalty on Brandon Graham in the final minutes took away their last chance to pull off a comeback.

Despite all the chaos, Taylor Heinicke and the Commanders deserve plenty of credit for an excellent performance on the road. The journeyman quarterback helped lead his offense on a number of marathon touchdown drives that burned clock and put them in the driver’s seat. Washington finished with more than twice as much time of possession as Philly (40:24 to 19:36).

The loss dropped the Eagles to 8-1, just a game ahead of the Giants in the NFC East. For the Commanders, it was by far the biggest win of their season, and they’re now back to .500 with a 5-5 record.

The Sporting News was tracking live scoring updates and highlights from Commanders vs. Eagles. Here are all the key moments from the Week 10 matchup you might have missed.

Offensive Spotlight: Despite facing one of the league’s best cornerbacks in Darius Slay, Terry McLaurin had a field day against the Eagles. The fourth-year receiver caught eight of his 11 targets for 128 yards. He averaged a staggering 3.76 yards per route run, his highest mark all season.

Defensive Spotlight: Chauncey Gardner-Johnson has continued to look like an excellent addition for the Eagles defense. The former Saint finished with a 91.8 grade on first review, which would be the highest of his career. He had an interception and a forced incompletion on 32 coverage snaps. His six interceptions this season now lead the NFL.

Rookie Spotlight: Brian Robinson Jr. continues to establish himself as the Commanders’ top running back. On 26 attempts, the third-rounder ran for 87 yards and a touchdown, with 62 yards coming after contact. His 78.6 grade on first review would be the highest of his young career by over eight points.

Offensive Line Spotlight: The Eagles offensive line held up pretty well in the loss, as it didn’t allow a sack or hit on 28 pass-blocking snaps, the first time it accomplished that since Week 1 against the Detroit Lions.

Right tackle Lane Johnson was particularly impressive, as he didn’t allow a single pressure on 28 pass-blocking snaps. He’s now only allowed a 4% pressure rate all season, the fourth-lowest among offensive tackles.