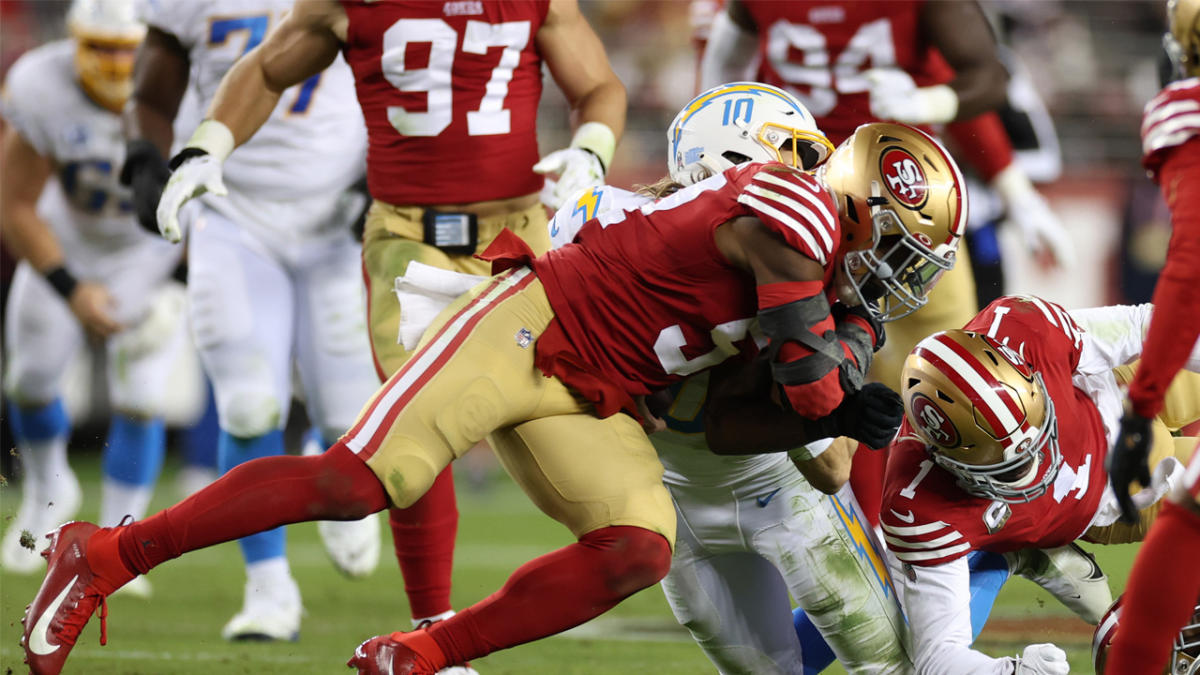 San Francisco 49ers linebacker Dre Greenlaw was ejected just before halftime of Sunday’s game against the Chargers on a questionable unnecessary roughness penalty.

With 38 seconds left in the first half, Los Angeles quarterback Justin Herbert scrambled away from defensive pressure and began running toward the first down. Linebacker Fred Warner caught up to the player, and was able to trip him up. As Herbert fell to the ground, Greenlaw, who had already started running toward the scrambling quarterback, dove toward Herbert and collided with his helmet. (Safety Jimmie Ward appeared to alter Herbert’s path when he hit him first.)

The officials huddled to discuss what to call on the play. During that time, NBC cut to rules analyst and former NFL official Terry McAulay, who concluded that Herbert is a runner and can’t be called “defenseless,” and doesn’t get protection for his head and neck area. McAulay added his view that Greenlaw did not lead with his helmet to make “forcible contact,” on Herbert so there shouldn’t be a foul.

But the NBC analyst’s conclusion did not translate onto the field. Greenlaw was called for unnecessary roughness for his hit and ejected from the game. McAulay said he spoke to the NFL league office at halftime, and that league vice president Troy Vincent had determined “that the player lowered his head and made illegal forcible and flagrant contact to the head of an opponent.”

Even with Greenlaw out, the Niners’ defense had a stellar second half, holding the Chargers to zero points after halftime to close out a 22-16 win.

The call appeared to not only be wrong, but also inconsistent with how the game had been officiated up until that point. Earlier in the half, Brandon Aiyuk fumbled a catch after he was spun into Chargers safety Derwin James, who made an incidental helmet-to-helmet hit that ricocheted onto the ball, forcing the turnover. That play was not called for unnecessary roughness, much less an ejection.

Coach Kyle Shanahan “used a whole lot of expletives” when asked about Greenlaw’s ejection at halftime, according to NBC sideline reporter Melissa Stark. Greenlaw was also annoyed by the call, posting “Free me” on Instagram during the third quarter. Shanahan elaborated after the game. “It kind of blew my mind. I get the penalty, but I have to learn what that is,” he said. “There had to be intent or something necessary. That really shocked me. Hopefully they can teach us so we can understand why we lost one of our players.”

Greenlaw is just the eighth player to be ejected this season. His dismissal comes during his first game back from a calf injury. Herbert returned to the game for the Chargers’ first series after halftime.