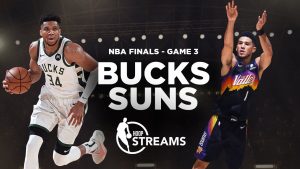 The NBA has a new champion. The Milwaukee Bucks pulled out a tough 105-98 victory over the Phoenix Suns in Game 6 on Tuesday night to win their first title in 50 years. The Bucks fell behind 2-0 in the series, but they never gave up. Instead, they dug deep and won four straight games to lay claim to the Larry O’Brien Trophy.

As he has all postseason, Giannis Antetokounmpo led the way for the Bucks in Game 6. The two-time MVP finished the game with one of the most impressive stat lines in NBA Finals history — 50 points, 14 rebounds, and five blocks. As a result of his production throughout the series, Antetokounmpo was named Finals MVP. Giannis obviously also got some help in the closeout game. Khris Middleton dropped 17 points, and Bobby Portis added 16 points off of the bench.

As for Phoenix, well, they had a great run, but ultimately they just didn’t have enough to get it done. Chris Paul paced the Suns with 26 points and five assists in Game 6, but two wins away are as close as Paul will get to becoming an NBA champion, for now. The Suns will now enter the summer facing some questions, while the city of Milwaukee will have to figure out its parade plans. But, before heading into the offseason, let’s take a look at four key takeaways from Milwaukee’s Game 6 victory over Phoenix.

1. An all-time performance from Antetokounmpo

It’s not hyperbole to say that Giannis Antetokounmpo put together one of the best single-game performances ever in NBA Finals history in Game 6. His effort and efficiency were off the charts.

With his production, Antetokounmpo became just the seventh player in NBA history to score 50-plus points in a Finals game. He also became the first player ever to record 50 points, 10 rebounds and five blocks in a playoff game, per ESPN Stats and Info. He accounted for 47.6 percent of Milwaukee’s points on Tuesday night. That’s the fourth-highest in a Finals game in the shot-clock era. Michael Jordan and Elgin Baylor are the only players to record a higher percentage during that span.

Antetokounmpo was especially productive in the second half of the contest, where he scored 33 of his 50 total points. Over the last 50 years, only two players have scored at least 33 points in a half of a Finals game. Michael Jordan and Antetokounmpo. Not bad company for the Bucks star, who put on a performance in Game 6 that won’t soon be forgotten.

2. A stellar night from the foul line for Antetokounmpo

Giannis Antetokounmpo’s issues from the foul line were a major storyline throughout the postseason, as the two-time MVP has had his fair share of struggles from the charity stripe. But in Game 6, he was absolutely money from the line. Antetokounmpo was in attack mode from the jump on Tuesday night, as he put his head down and got to the rim over and over again. Once there, the Suns had no choice but to foul Antetokounmpo, so they did. But, while sending Antetokounmpo to the line has been a viable approach in the past, it didn’t work in Game 6. Antetokounmpo took the fouls from Phoenix, stepped to the line and proceeded to knock down shot after shot. When all was said and done, Giannis had knocked down 17 of his 19 attempts from the charity stripe — that equates to an extremely impressive 89 percent. In a game that was determined by just seven points, Antetokounmpo’s ability to consistently produce points from the foul line was a major difference-maker in the contest.

3. Another playoff collapse from Chris Paul

Over the course of his career, Chris Paul has earned a reputation as one of the league’s best point guards. However, he also has gained a bit of a reputation for losing leads in playoff series, and unfortunately, that trait followed Paul to Phoenix. After going up 2-0 over Milwaukee in the series, the Suns dropped four straight games, marking the fourth time in his career that Paul’s team has lost a best-of-seven series after going up 2-0. He’s the first player ever to blow four such series leads.

For a while, it looked like Paul might finally claim his first NBA title. But now, the future Hall-of-Famer will head into his 17th season in 2021-22 hoping that he’ll get another opportunity to try to capture that elusive championship.