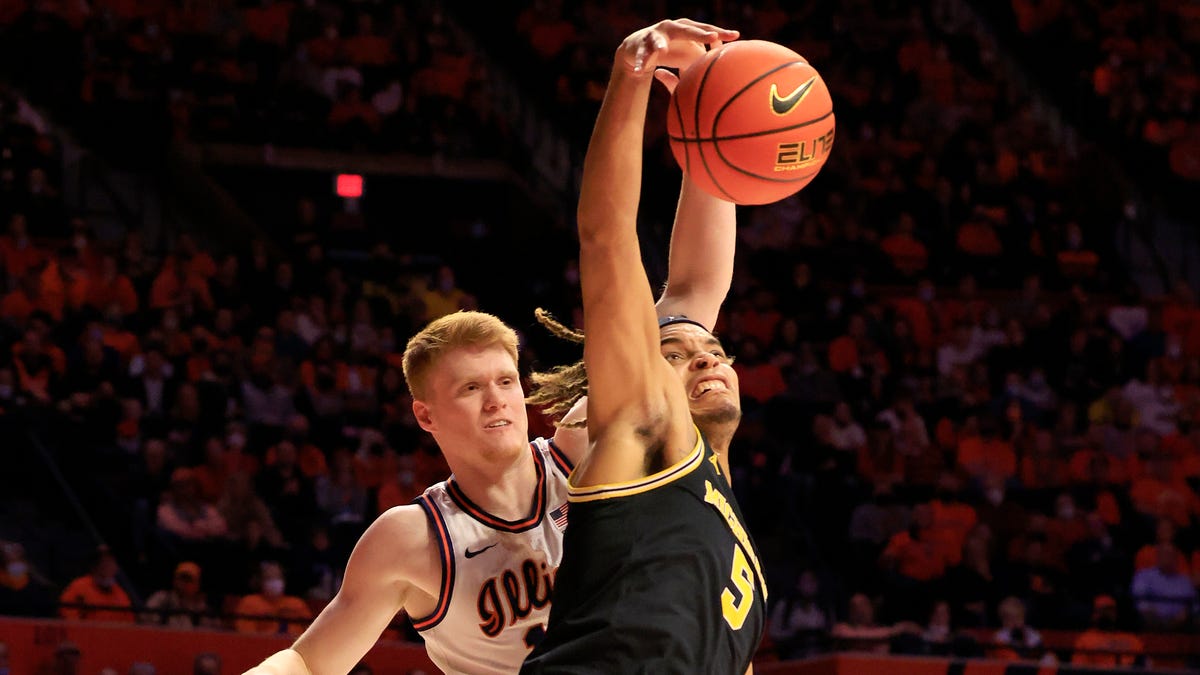 Improbably and almost inconceivably, Michigan basketball had a chance to take the lead.

Fewer than seven minutes remained in a game that, on paper, Juwan Howard’s team had no business winning. Not without the team’s best player, Hunter Dickinson, or its backup center, Brandon Johns Jr., both of whom were ruled out less than an hour before tipoff at State Farm Center. Not without a normal practice for more than a week as the Wolverines, whose previous two games were postponed due to COVID-19, were unable to field enough players for five-on-five drills.

Yet here was Michigan emboldened by its dire circumstances, scrapping with one of the best teams in the Big Ten. The Wolverines trailed by a point when the ball landed with point guard DeVante’ Jones following an Illinois turnover, and the transfer from Coastal Carolina sliced toward the rim.

But Jones’ layup spun in and spun out, coming agonizingly close before twisting off the rim. The Illini pushed the ball the other way and found star center Kofi Cockburn for a powerful two-hand slam that ignited the crowd, reclaimed momentum and kneecapped the undermanned Wolverines. Cockburn’s dunk sparked a late 7-0 run that propelled Illinois (13-3, 6-0 Big Ten) to a 68-53 win on a night U-M (7-7, 1-3 Big Ten) showed more fight than at any point this season.

Cockburn finished with a game-high 21 points and 10 rebounds while taking advantage of Michigan’s undersized front line. The Illini got 15 more points off 3-pointers in the second half to lurch ahead in the final minutes. Jones led the Wolverines with 17 points and six rebounds.

“We went out and we competed because the guys are passionate about playing against their opponents and going out there and representing this fine institution,” Howard said. “I’m always in the trenches with this group. I’m so damn proud of how they approached these unfortunate circumstances. Trust in me, trust in the staff, trust in the medical (personnel) — but then also coming out with passion and fight.”

Any excitement surrounding Michigan’s return to the court after a pair of postponements (against Michigan State and Purdue) was snuffed out roughly 20 minutes before tipoff when word arrived from the athletic department that Dickinson and Johns were unavailable to play.

Both players traveled with the team after testing negative for COVID-19 but were unable to practice much in the buildup to Friday’s game. Johns participated in pre-game warmups for the Wolverines, while Dickinson remained in the locker room until moments before tipoff.

“The medical (staff) cleared (them) and said that they are better health-wise,” Howard said. “I didn’t feel comfortable with putting them out there in the game with no practice time because all that’s going to do is put them in a tough situation where they can possibly — and thank god it didn’t — you never know how that situation would end up. But overall, they’re here to support their brothers, and it was great to see the support on all levels.”

The circumstances surely were tormenting for Dickinson, who expressed his excitement for another crack at the Illini as early as mid-October, during Big Ten media day, when he lamented his six-point effort in a 76-53 loss at Crisler Center last March. Dickinson told reporters Illinois fans bombarded his Twitter and Instagram accounts with messages reminding him of the poor performance — a byproduct of high-level sports that Dickinson, the team’s leading scorer (16.1 points per game) and rebounder (8.8 per game), said he finds amusing.

Friday’s game was billed as a marquee matchup between the league’s two best centers in Dickinson and Cockburn, who entered the game averaging 22 points and 12.5 rebounds per game with eight consecutive double-doubles. Instead, the Wolverines were left with just one scholarship player to defend the 7-foot, 285-pound behemoth.

That responsibility fell to freshman Moussa Diabate, whose listed weight is 210 pounds. But Diabate was fearless and attacked Cockburn on Michigan’s first two offensive possessions, scoring down the right side of the lane after tossing up an air ball from the left. It was on the defensive end where he lacked the girth, strength and breadth of shoulder to keep Cockburn, the Big Ten’s second-leading scorer, from working his way into dangerous spaces. Cockburn scored eight of his team’s first 12 points as Diabate was whistled for two fouls in the first five minutes.

“He’s big,” Diabate said. “It was hard, I ain’t going to lie. It is challenging. But I’m a basketball player at the end of the day. I’m just trying to compete every day and I love those types of matchups. That’s what I’m looking for and it makes me better.”

Diabate’s early foul trouble prompted the Wolverines to improvise, first by bringing in walk-on Jaron Faulds to play backup center and then, in a move that personified Juwan Howard’s mantra of “all hands on deck,” turning to sparsely used small forward Jace Howard as an emergency option. At 6-7 and 225 pounds, Jace Howard clawed for every inch against Cockburn while fronting the Illinois star to deny entry passes, all while the coaching staff pleaded for three-second violations. Each successful defensive possession prompted an eruption from the U-M bench, which pulsated with energy as Michigan relished its role of shorthanded underdog in a raucous environment.

That impassioned defense kept Howard’s group afloat while the teams combined to miss their first 12 shots from 3-point range. Unusual lineup combinations and raw aggression from Michigan disrupted the Illinois offense, which settled for difficult shots and neglected Cockburn at times in the latter stages of the first half. The Illini shot just 40% from the field and missed eight of nine 3-pointers en route to a 26-22 lead at the break. Jones accounted for 50% of U-M’s points with floaters, layups and a timely 3-pointer.

“They played harder than we did tonight,” Illinois coach Brad Underwood said, “which doesn’t have me very excited and doesn’t happen very often.”

With the second half came an encouragement from Howard to run whenever possible as the Wolverines, whose half-court offense was understandably disjointed, attempted to manufacture points on fast breaks. Ever the matador, Howard waved his team up the floor following each turnover or missed shot by Illinois, and his players obliged: a floater off the glass by Jones; a transition layup for Diabate, who beat Cockburn to the rim; a coast-to-coast layup by freshman Kobe Bufkin; a transition foul drawn by Jace Howard, who sank both free throws to pull U-M within 43-41 with 8:57 remaining.

But without Dickinson, the offense lacked direction in critical moments, and Michigan turned the ball over four times in the final six minutes. Howard’s team had given everything it had, but the inspiring effort still fell short. The losing streak extended to three.

“I’m so proud of these guys, man,” Jones said. “They fought to the last end. Every single one of them, from top to bottom. And that’s what we want from this group. Obviously we didn’t get the outcome we wanted, but I know going forward in the season, the confidence is just going up. I can’t wait for the next game.”