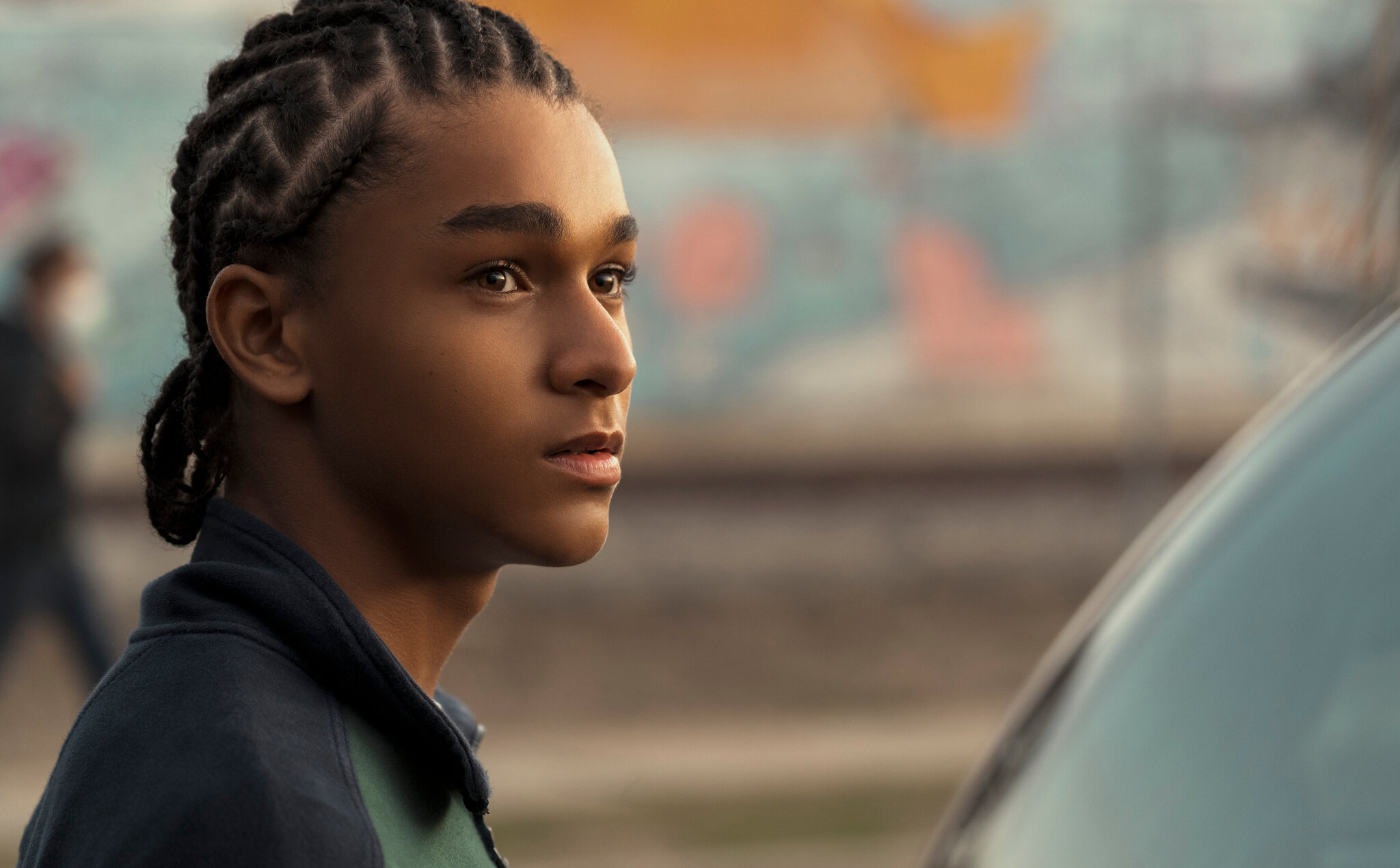 If you had any questions about where Colin Kaepernick’s activist spirit originated, a look at Netflix’s new limited series, Colin in Black and White, removes all doubt.

These days, Kaepernick is known as the ex-San Francisco 49ers quarterback whose decision to kneel during the national anthem in 2016 to protest racial injustice inspired others and kicked off years of conflicts. He became a free agent in 2017 and remains unsigned by an NFL team, a situation many analysts attributed to political blowback from the controversy sparked by his protest.

But Colin in Black and White makes the case that he’s been fighting those kinds of battles since he was in middle school, facing down clueless coaches, oblivious friends and well-intentioned white parents who adopted a biracial kid but seemed to have little idea how to handle his desire to embrace Blackness.

Storytelling subtle as a sledgehammer

Created by Kaepernick with superstar director/executive producer Ava DuVernay, Colin in Black and White delivers its message with storytelling subtle as a sledgehammer.

Focused on scenes in the former NFL quarterback’s life stretching from eighth grade to his last year of high school, the series is a scripted drama spiced by onscreen narration from the real-life Kaepernick, emphasizing his struggle to be the kind of athlete – and man – that he chooses to be.

Kaepernick sets the tone early, speaking ominously while visual images morph from Black professional athletes examined by white coaches and team doctors to slaves getting a once over from white men selling them at auction.

“What’s being established is a power dynamic,” says Kaepernick, clad in all black, pacing through the frame. “Before they put you on the field, teams poke and prod and examine you. Searching for any defect…no boundary respected. No dignity left intact.”

The show tends to make its points over and over, with Kaepernick’s voiceovers explaining things that also play out in scripted scenes. It can make the show feels inconsistent; at times, the narration expands your understanding with exciting looks at Black history. In other moments, it just emphasizes something you already know. Ditto with Kaepernick’s performances, which are sometimes passionate and emotional, other times stilted and a little heavy handed.

The series itself often feels like a not-so-passive aggressive swipe at the authority figures – all seemingly white – who doubted his goals and made it tougher for him to be himself, including his parents.

Played by Nick Offerman and Mary-Louise Parker, Rick and Teresa Kaepernick are well-meaning white folk who listen to Christian rock on long car rides and dress like all their clothes came from T.J. Maxx and Marshalls. They adopted Colin as a baby in Wisconsin and moved to Turlock, California – another place, the former NFL star notes wryly, known for dairy farming and a scarcity of Black people.

Though they clearly love Kaepernick, his parents are also shown as clueless and a bit bewildered by his efforts to connect with Black people and Black culture — from trying to wear cornrows in his hair like his basketball hero Allen Iverson, to taking a Black girl to a formal dance in high school.

Their responses can be inconsistent. In the show’s first episode, Teresa responds to her son’s efforts to get his hair braided into cornrows by taking him to a barbershop recommended by her Black co-workers. But when they visit the stylist’s home a few months later for a touch-up, Teresa gets unnerved by the neighborhood and her son’s love for the soul food they share with him.

Eventually, a harsh, white baseball coach – and they all seem to be harsh, white coaches here – demands Kaepernick cut his hair to stay on the team. It’s a position backed by his parents, who don’t seem to understand or respect the obvious: his hairstyle choice is an example of a young man of color, reaching toward his Blackness.

“You look like a thug!” Teresa says to him, finally. Young Kaepernick is soon back at Supercuts, getting his Iverson-inspired locks unbraided and cut down. Actor Jaden Michael, who plays Kaepernick with a bright-eyed optimism that helps ease some of the series’ heavy handedness, does a great job communicating his sense of suppressed confusion, betrayal and anger all at once.

“I knew it wasn’t right,” Kaepernick himself says in a voiceover, “but I didn’t have the knowledge, wisdom or language to fight back.”

In a more subtle show, the scene with Teresa would be enough to communicate the impact of that pejorative — thug – flung at a young Black man who just wanted to look like his hero. But Kaepernick also speaks on the history of the term as a coded racial epithet, re-explaining something in a way that feels a little on the nose.

There are other scenes which don’t make his parents look great, including a moment when Teresa hides a photo of Kaepernick posing with a Black girl he took to the formal dance, while urging him to date the white daughter of a friend. It makes you wonder if they ever realized the impact of such actions on their young Black son, and why they don’t seem to talk to him in-depth about race at a crucial moment in his life.

A character who chooses to be unapologetically Black

What I found most compelling about Colin in Black and White is something I wish the show had spent more time exploring: Kaepernick’s decision to choose being Black.

After all, as the TV series depicts, he’s in a situation where many people around him — coaches, friends and family — don’t understand his thirst for Black culture. Other than friends at school, he doesn’t seem to have any other Black people in his life. He could have easily chosen to reflect white culture more in his life choices.

Colin in Black and White seems to present this choice as a given – a natural thing for Kaepernick to look up to Black sports stars, seek to date Black women and embrace hip hop culture. But for him, and many biracial kids like him — including the former President of the United States – self-identifying as a Black man can be an affirmative choice.

There are moments in this series when his parents make it plain that they wish he would make a different decision. “How long do you think this is going to last?” Teresa asks her son in an exasperated tone as they arrive at the hairstylist’s home. “The braids?” he asks, sounding confused.

“All of it,” she says, clearly unnerved by the world her son is eager to step into.

For a show that emphasizes so many of its points about race so directly, it’s odd that this isn’t talked about more. Later episodes show Kaepernick asserting himself a different way; refusing a slew of opportunities to pursue a career in Major League Baseball to follow his dream of being a football quarterback.

Though the series details all the rejections he got from college football programs convinced he wasn’t big enough for the position, the drama here wasn’t quite so suspenseful. We know he eventually makes it to the NFL.

Overall, Colin in Black & White demonstrates why Kaepernick has become the principled man he is today. It’s a very good series which humanizes a courageous athlete who has too often been belittled and misrepresented by ignorant ideologues.

But a little more subtlety and a slightly wider lens could have turned this very good program into a truly great one.