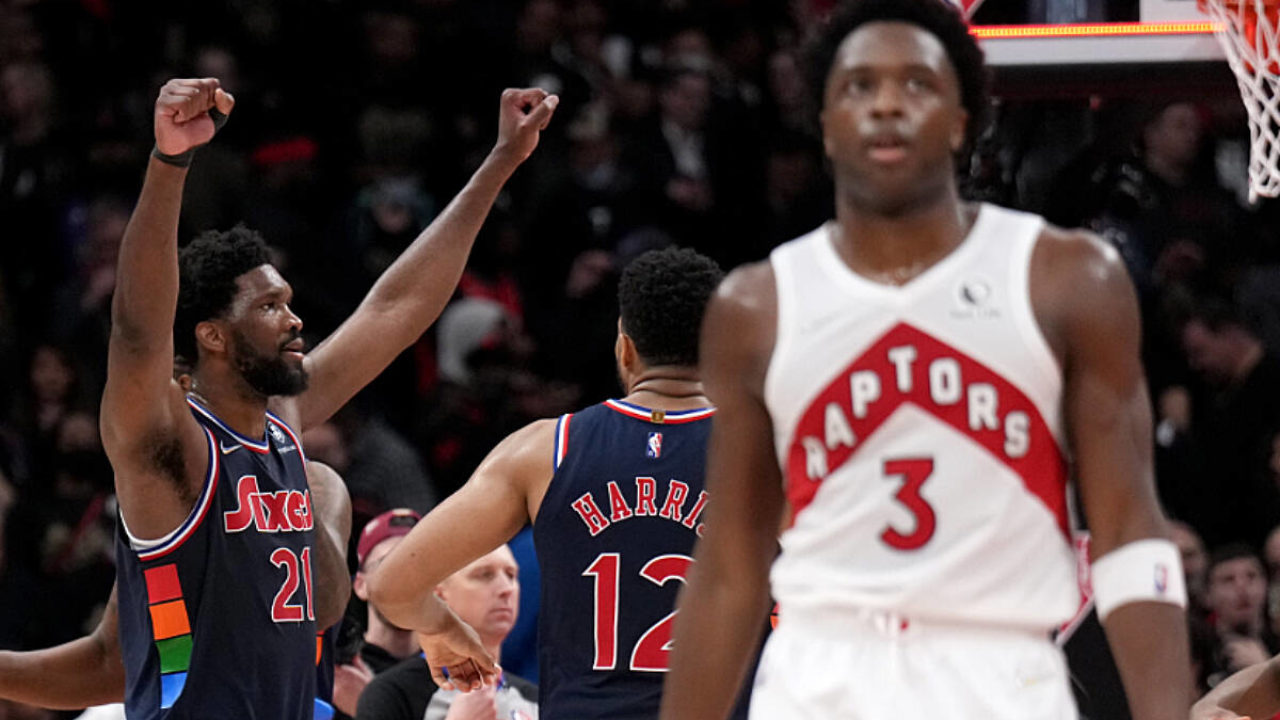 TORONTO — Joel Embiid made a 3-pointer with 0.8 seconds left in overtime to give the Philadelphia 76ers a 104-101 victory over the Toronto Raptors on Wednesday night and a 3-0 lead in their first-round series.

After 76ers coach Doc Rivers called timeout to save the possession as the shot clock was running down, Embiid took an inbounds pass from Danny Green with 0.9 seconds left on the shot clock and hit a turnaround shot from near the sideline before running back to his bench in celebration.

Toronto’s OG Anunoby couldn’t get a shot off before the buzzer.

Embiid had 33 points and 13 rebounds, helping the 76ers rally from a 17-point deficit. James Harden had 19 points and 10 assists before fouling out in the closing seconds of regulation.

Tyrese Maxey scored 19 points and Tobias Harris had 11 points and 12 rebounds for the Sixers, who can wrap up the series in Game 4 on Saturday.

Anunoby scored 26 points, Gary Trent Jr. had a playoff-high 24, and Precious Achiuwa had 20 for the Raptors.

Pascal Siakam and Fred VanVleet each had 12 points. VanVleet shot 3-for-13, going 2-for-10 from 3-point range.

Philadelphia never held a lead in regulation, finally grabbing a 99-97 edge on Maxey’s shot with 3:27 left in overtime.

Embiid fouled Anunoby with 26 seconds left, and the Toronto forward made the first but missed the second, knotting it at 101-all.

Raptors rookie Scottie Barnes sat for the second straight game because of the sprained left ankle that knocked him out of Game 1. Raptors coach Nick Nurse said Barnes is making progress and could return Saturday.

Trent was limited to 10 minutes of action in Game 2 because of illness, and didn’t play in the second half Monday. He played 45 minutes Wednesday, shooting 9-for-19.

Maxey scored to make it a three-point game, and Anunoby was called for goaltending on Harden’s shot with 1:14 left, cutting it to 95-94. After missing at one end, VanVleet fouled Harden with 49 seconds to play, but the Sixers guard missed his first shot before tying it 95-all with his second.

Harden fouled out with 27 seconds left, sending Achiuwa to the line, but the Toronto forward missed both shots.

Philadelphia had two chances to win it in regulation, but Embiid missed a 3 and Harris couldn’t convert after grabbing the rebound.

The 76ers played without guard Matisse Thybulle. Philadelphia’s defensive specialist is not fully vaccinated against COVID-19, making him ineligible to cross the Canadian border. Thybulle also missed an April 7 regular-season loss to the Raptors.

The Raptors hosted a postseason game north of the border for the first time since Game 5 of the 2019 NBA Finals against Golden State. The Warriors won that game, but Kevin Durant injured his Achilles tendon and the Raptors won the series in Game 6.

Anunoby scored 10 points in the first quarter and the Raptors led 29-19. Achiuwa scored five points as the Raptors widened their edge with a 9-2 run to start the second quarter, opening a 38-21 lead on Siakam’s basket with 9½ minutes remaining in the half.

Siakam’s shot in the final second gave Toronto a 56-46 lead at the intermission.