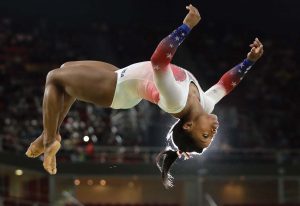 Simone Biles of Team U.S.A. made history while practicing for the Tokyo Olympics as she nailed the Yurchenko double pike vault to podium, all caught on video.

In the short clip taken today, you can see the mind-blowing athleticism that we are constantly hit with by the 24-year-old superstar. Even though she took a step back in the dismount, it was still stunning. The slow-motion look at it shows how much height she got while maintaining a near-perfect form.

The above move requires a gymnast to perform a backflip off the vault, then complete two full rotations in a pike position before landing — a very difficult move to land.

One person in awe of her move wrote, “I can’t walk and chew gum. I’ve nearly broken an ankle [vacuuming] and I had a life-threatening accident sleeping. #SimoneBiles is stunning.”

There are already two floor exercise moves named after her –“The Biles” and “The Biles II,” with the latest practice vault in the running for the latest signature move dub.

Biles is one of six gymnasts making up the U.S. women’s gymnastics team. She’s joined by Skinner, Jordan Chiles, Sunisa Lee, Jade Carey and Grace McCallum. Per Today, the team opted out of staying in Tokyo’s Olympic Village and will be staying at a nearby hotel instead.

The team’s alternate Kara Eaker recently tested positive for COVID-19 and both she and her fellow alternate Leanne Wong were placed in quarantine.