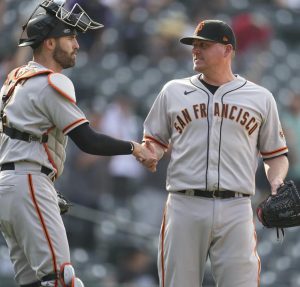 The Giants’ bullpen largely has dodged the injury issues that have cost so many position players and starting pitchers time this season. But Friday, with 15 games remaining, the first-place club placed closer Jake McGee on the injured list with a right oblique strain.

Manager Gabe Kapler said McGee first felt the muscle tweak Tuesday when warming up for a game he didn’t enter. The next day, McGee played catch and still had some minor discomfort. Since that’s his front side, key for a pitcher, the Giants had him get an MRI exam, which revealed the strain.

The move is backdated to Tuesday, so McGee is eligible to return Sept. 24, But Kapler wasn’t sure if this will be a minimum stay or if McGee’s recovery might take longer.

“I think we’re looking to try to get him ready before the end of the season, at this point,” Kapler said.

McGee, the National League Reliever of the Month for July, has a career-best 31 saves, a 2.72 ERA and 58 strikeouts in 59 ⅔ innings with just 10 walks.

With McGee out, the team will turn to three relievers for late-inning work, and any of them might work the ninth depending on matchups: submariner Tyler Rogers, who entered Friday with a streak of 14 scoreless innings; trade deadline reacquisition Tony Watson, a lefty who hasn’t allowed a homer in his past 35 innings; and righty Dominic Leone, who lately has been the opener for bullpen games. Like Rogers, Leone can retire left-handers and right-handers, as his .178 batting average against indicates.

Rogers has 12 saves, so he might get the bulk of the late opportunities.

“I don’t think it’s a secret Rogers has been one of our better relievers all year, so if we needed somebody to throw the ninth, he’s totally capable of that,” Kapler said. “Sometimes it’s just a matter of trying to get Rogers to face three or four of the toughest hitters in the lineup. Sometimes that’s going to come in the eighth, sometimes in the ninth. And sometimes it might come a little bit earlier. And Dom has done great work in the late innings and he is as dependable as anybody.”

With McGee going on the injured list, the Giants recalled right-hander Jay Jackson, who had been sent out the previous day to make room for Sammy Long. The team also activated infielder Donovan Solano (COVID-19 IL) and optioned infielder Thairo Estrada back to Triple-A Sacramento.

The bullpen has been in heavy use this past month with starters Alex Wood (COVID) and Johnny Cueto (elbow) out, working a big-league high 71 ⅓ innings in September entering Friday. But McGee’s usage hasn’t been more than usual, with five innings of work.

The relievers also will get a little bit of a break with Wood coming back to start Saturday against the Braves. He’s likely to be fairly limited in his pitch count, considering that he has not pitched since Aug. 26 and he had tremendous fatigue while out with COVID. But the team will get him stretched out as much as possible in the next two weeks heading into the postseason.

“Get back in, have a few before the playoffs and be ready to go,” Wood said. “Just happy to be back and be able to give us a chance to win.”

In addition, Cueto threw at a distance of 90 feet, and Kapler said there is a chance Cueto could pitch again in the regular season if he is able to throw a bullpen session Sept. 27 or 28.

“This is a step in the right direction,” Kapler said.

Susan Slusser has worked at The San Francisco Chronicle since 1996. She is the Giants beat writer. Previously, she covered the A’s full-time from 1999 to 2021.

Slusser’s book about the A’s, 100 Things A’s Fans Need to Know and Do Before They Die, came out in 2014 and she and A’s radio announcer Ken Korach released a new book, If These Walls Could Talk, Tales from the Oakland A’s Dugout, Locker Room and Press Box, in 2019. She is also a correspondent for the MLB Network.