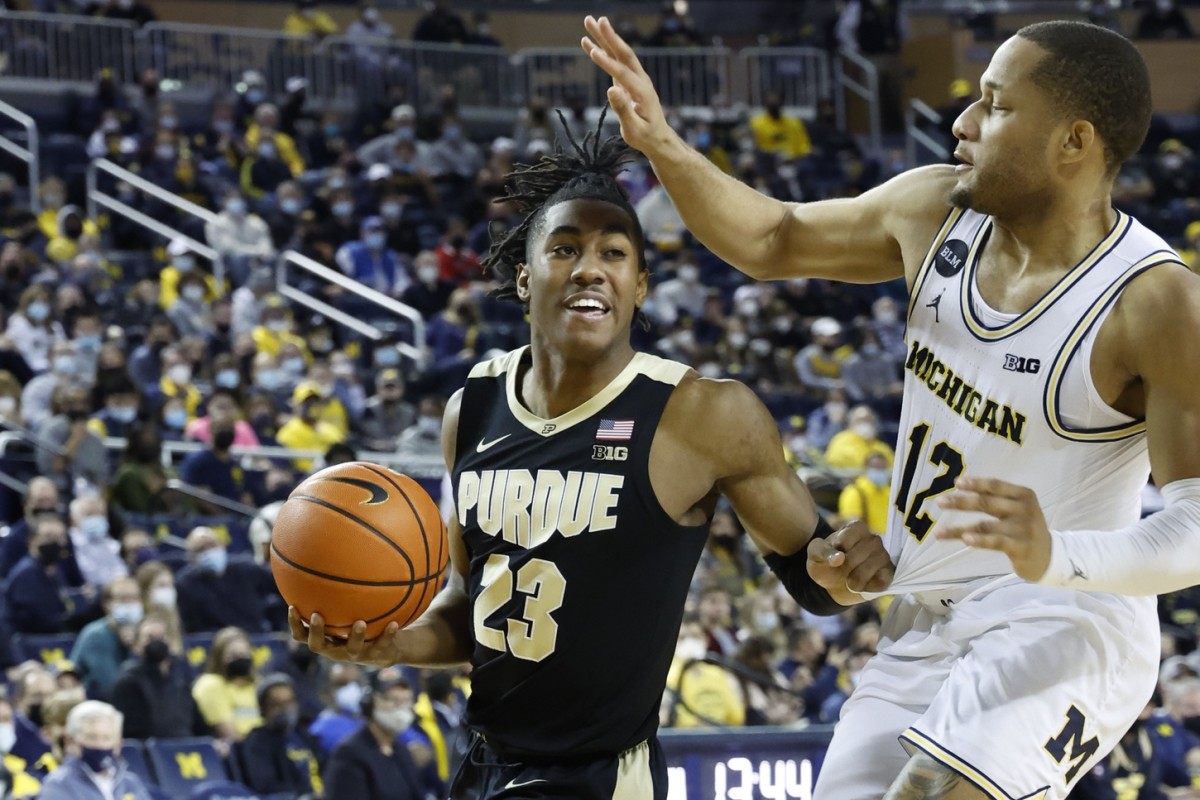 For the first time in the last seven games, the Purdue Boilermakers suffered a loss and this one was perhaps the worst one for them in a while. The No. 3 Boilermakers went into Ann Arbor, Mich., Thursday night and departed with a 24-point loss to the Michigan Wolverines, leaving head coach Matt Painter searching for answers.

The Boilermakers are typically a team that has success from the outside, but they hit just 4-of-18 of their shots from beyond the arc as a team. Purdue also turned the ball over 14 times and star big man Zach Edey ended with just 10 points in the game while battling foul issues. It was a night to be forgotten, as Edey and star guard Jaden Ivey combined for just 28 of Purdue’s 58 points in the 82-58 loss.

This was a drubbing in the worst way, a take-your-lunch-money, steal-your-girl kind of game where you simply shake your head and wonder how that happened. Because facts are facts, and this simply does not happen to No. 3-ranked Purdue.

It’s been more than a year since Purdue has lost by double-digits or more, going all the way back to Jan. 22 last year when they lost 70-53 at home to Michigan in a game that Sasha Stefanovic missed because of COVID.

They don’t lose this way.

They were 21-3 entering this game, and had just worked their way back into first place with a crazy-impressive 16-point win over Illinois on Tuesday night. They looked like world beaters Tuesday — and they looked completely lost on Thursday.

And that just can’t happen.

You know I’m a glass-half-full guy, and I’ll find the positives. I can find none from Thursday’s game, other than the fact that it only counts as one loss and the sun did come up on Friday morning. (Well, sort of. It’s snowing and gloomy here in Ann Arbor.)

There was so much bad from this game, especially coming from a Purdue team that had just reeled off six straight wins since losing at Indiana on Jan. 20. And the big-picture things that went wrong are all bell-ringers. Put any of these things together, and Purdue will have a hard time winning.

THREE-POINT SHOOTING: Purdue led the league in made threes (233) coming into the game and Michigan was dead last (133), a 100-basket difference. But Michigan went 12-for-21 from deep, and Purdue was just 4-for-18. The four made threes was the lowest total of the year. That’s a 24-point swing — in a game that ended with a 24-point deficit.
TURNOVERS: The Boilers were sloppy with the ball throughout, committing 14 turnovers. Michigan had only seven.
REBOUNDS: Purdue got outrebounded 35-25 overall, and gave up 13 offensive rebounds, which simply cannot happen. That’s an effort thing, sad to say, and it wasn’t there last night.
DEFENSE: Purdue wins with offense most nights, and their defense is average to above average at best. Thursday night, it was awful. They let point guard DeVante’ Jones into the lane far too easily, and power forward Moussa Diabate had his way inside. It was very disappointing to see Purdue react so poorly to some of Michigan’s new wrinkles that we didn’t see last Saturday when Purdue beat them 82-76 at Mackey.
The thing to remember, though, is that this is just one loss. Michigan, even though they are just 13-9 on the season and 7-5 in the Big Ten, were the preseason favorites to win this league. Let’s not forget that.

But during that six-game winning streak, Purdue won by an average of 11,.7 points per game, and looked very good doing it. They got back in the Big Ten lead, moved back to a No. 1 seed in NCAA tourney bracket talk, and still have proven that they can beat you in a variety of ways.

They also have proven on Thursday that they can be beaten.

For a team with national championship aspirations, this is a tough loss to swallow because it exposes so many flaws with this team. They aren’t going to win many games if they get a combined six points from guards Sasha Stefanovic and Eric Hunter Jr., who had three points each and had more combined turnovers (3) than baskets (2).