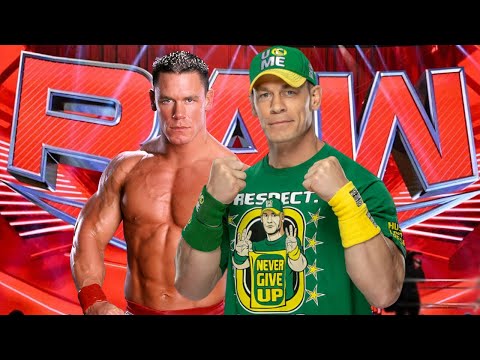 Call him The Dr. of Thuganomics, call him Mr. Hustle, Loyalty, & Respect, call him Legend. Whatever you may call him, you know his name: John Cena.

As noted, the 16-time WWE World Champion made his return to WWE “Raw” this evening to celebrate 20 years since he first debuted in the company. Two decades later, Cena has made a stamp on World Wrestling Entertainment that is undeniable to every fan that has kept up with his journey.

Since that, John Cena has been busy with his commitments in Hollywood movies. He was seen starring in the popular show Peacemaker which released in January 2022. Cena used the occasion to thank his fans who have supported him through thick and thin over the course of the last two decades.

The Cenation Leader mentioned that only the fans who cheered for him in the WWE circuit but even those who booed him helped him in a way to put up a better show and improve.

Leading up to his appearance, fellow legends like ‘Stone Cold’ Steve Austin, Triple H, Randy Orton, Chris Jericho, Bryan Danielson, & several others appeared in video messages to celebrate Cena’s career. He also appeared in a variety of backstage segments alongside current stars like The Street Profits and someone he has been going back-and-forth with online: Theory. The two had a tense confrontation where the United States Champion told Cena to keep his mouth shut while he listed reasons why he is such a special, once-in-a-lifetime talent.

Vince McMahon, himself, made a special appearance on WWE TV to welcome Cena down to the ring for his Anniversary celebration. Part of the Raw roster lined the sides of the entrance ramp as he made his entrance and said his signature, “Let’s go to work” before running down to the ring.

On the mic, Cena says that today marks his WWE birthday. You can feel the potent energy and hear the noise where they’re at, so there is no better place to have his birthday. He jokes a bit about his jorts and then transitions to a speech about how tonight has nothing to do with anything that he has ever done.

For him, the 20th Anniversary shows that the people have cared about him enough for two decades so he could be himself and stay relevant. There were times when the fans hated him, and there were times that the fans loved him, but regardless, he wants to take the time to thank the WWE Universe. The crowd erupts in a “Thank you, Cena!” chant as John beams proudly.

He says, “Thank you for moments like those, and thank you for making me who I am!” He says that WWE prepared him for anything and that’s because of how the fans interacted with him throughout the years. Because of the fans and his experiences in his career, he is a better professional, he is a better husband, and he has learned humility, perseverance, and giving absolutely everything he has just like the WWE fans do at live shows.

He mentions his age and explains that he’s not sure when he will be in the ring next. It isn’t just going to be one match when he returns, but he is uncertain when that time will come. Cena, full of emotion, says that this entire celebration is all about us, not just about him. He hypes up the crowd one final time and says that’s the sound of us, and we just started. With one last, “If you want some, come get some!” Cena exited and threw his merch at the fans as he exited.

Cena first debuted with WWE back in June 2002, answering WWE Hall of Famer Kurt Angle’s open challenge and putting up a valiant effort against the Olympic Gold Medalist. Despite losing, the promise in his abilities led to a long-term WWE career that is recognized as one of the greatest in history.

Cena’s last televised appearance for the company took place at WWE SummerSlam last year when he lost in the main event against Roman Reigns in a WWE Championship match. He is a 16-time WWE World Heavyweight Champion, a 5-time WWE United States Champion, and a 4-time WWE Tag Team Champion with partners like Shawn Michaels, The Miz, & Batista. He also won the Money in the Bank contract in 2012 and is a two-time Royal Rumble Winner, pulling out victories in 2008 and 2013.