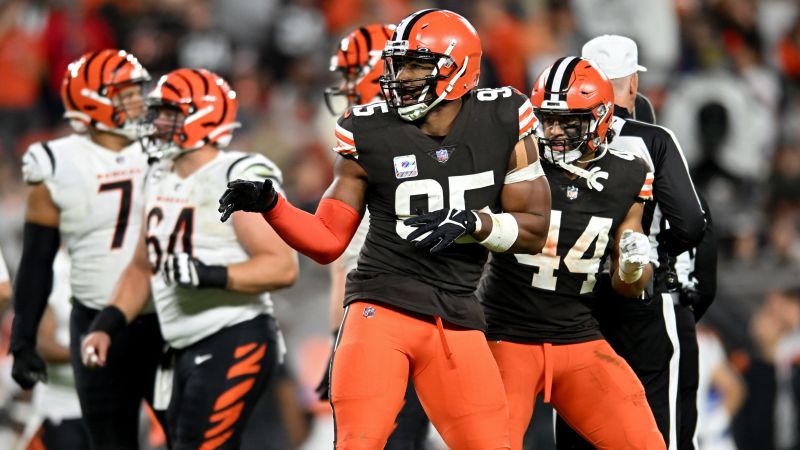 Coming off four straight losses, the Cleveland Browns were able to finally pick up a victory, dominating the division-rival Cincinnati Bengals in a 32-13 blowout victory at FirstEnergy Stadium Monday night.

“It was one of those days where we imposed our will,” quarterback Jacoby Brissett said.

Garrett, who came to FirstEnergy Stadium wearing a Halloween costume, led a scary defense that sacked Burrow five times and held the Bengals (4-4) to 229 total yards – 100 in the first half.

“Myles was very good,” Browns coach Kevin Stefanki said with a smile. “He does what No. 95 does. He was playing dominant out there. He is very difficult for people to block one on one. He gets a ton of attention, and when that happens, others are getting one on ones.”

Burrow has already been to the Super Bowl in just three NFL seasons. However, the Ohio native has yet to beat Cleveland, dropping to 0-4 in four career starts against Cincinnati’s AFC North rival. The Browns (3-5) ended a four-game losing streak, and in the process saved their season from slipping away as they try to stay competitive while awaiting quarterback Deshaun Watson’s return from an 11-game suspension.

Browns sacked Joe Burrow five times. It was a night of textbook tackling and a great performance by rookie defensive back M.J. Emerson, who went in and played incredible cornerback for the Browns all night long against a very talented Bengals wide receiver core (even though they didn’t have Ja’Marr Chase).

Garrett set the tone for a scary performance for the Browns by dressing up as Vecna, the sinister alien-like character from the TV series “Stranger Things.” This was indeed a strange night as the Browns finally looked like a competent team and recorded a lopsided win after so many close losses.

“We expect him to set the tone for us,” Brissett said of Garrett. “He will come up and tell you that he fed off of a lot of those other guys. There were not a lot of places for them to throw the ball tonight, and that was because of the back end but also because of the front end.”

It was Cleveland’s second blowout of Cincinnati in the past two years. The Browns thumped the Bengals 41-6 in their first meeting last year.

“They’ve had our number the last couple of years,” Burrow said. “They always play well against us, they have real good players in defense and are really well coached.”

Former Browns cornerback Joe Haden served as the honorary game captain. He signed a one-day contract to officially retire with Cleveland, which drafted him in the first round in 2010. Haden was a two-time Pro Bowler during seven seasons with the Browns before playing for rival Pittsburgh.

Browns: RT Jack Conklin went to the locker room late in the first half with an undisclosed injury, but returned after halftime.