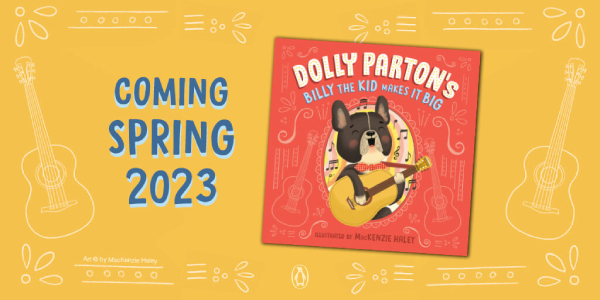 Mackenzie Haley, a graduate of Louisville’s Presentation Academy and The University of Dayton, is currently at work in her home studio with the deadline for Parton’s book fast approaching.

“Between now and the first week of January, I will be working non-stop. I am only giving myself off on Christmas Day and New Year’s Day,” Haley told the Courier Journal. “This is a really tight deadline but you can’t pass up an opportunity like this.”

Before starting work on Parton’s new book, Haley read through the country music singer’s manuscript and did some research into the real “Billy the Kid.” Or rather the canine “Billy the Kid” who is the inspiration behind the children’s book.

“It’s a book about bullying,” said the Louisville artist. “Billy the Kid’ is based on Dolly’s Goddog, a French Bulldog who belongs to her manager.”

For the record, “Billy the Kid” has his own Instagram page if you are interested in learning more about the inspiration behind the story.

Parton also recently launched a canine clothing line, “Doggy Parton,” with part of every purchase going to Willa B. Farms, an animal rescue group in Tennessee.

Creating the illustrations for “Billy the Kid Makes it Big” is not exactly Haley’s big break but it is the most recent addition to a run of successes that started about five years ago.

“There was a long period where nothing was hitting. For 15 years I worked all sorts of jobs while I freelanced as an illustrator in the evenings,” Haley told the Courier Journal. “I worked in a bank, in a restaurant as a food server, and as a medical claims adjuster handling personal injury protection claims.”

Haley honed her artistic style in the hours outside of her “9-5” work day until finally her persistence and passion paid off.

Four and a half years ago, after creating a series of illustrations she called “Little Vampire,” Haley’s artistic style attracted the attention of publishers.

“It’s interesting because those little vampires, Frankenstein, witches, ghosts, animals, and people were in a style that made me happy,” she said. “When you create something you enjoy, it shines through and that was the catalyst for what is happening today.”

Haley was able to leave behind her day job and had enough illustration work to make it a full-time career.

Earlier this year, when Parton’s team got in touch, Haley was hired to use her talents to bring “Billy the Kid” to life.

“He’s a cute little country dog who dreams of making it big and goes to Nashville to try to make it as a country artist,” Haley said. “It’s scheduled to be released in April 2023. It’s been a really fast turnaround. Most of the books I work on have about a year and a half to two-year turn.”

As the Louisville artist puts the final touches on her Parton project, she’ll also be finishing up her own children’s book, “Little Vampire,” which she wrote and illustrated for Starry Forest Books.

“I am usually working on multiple books at one time,” she said. “But for Dolly Parton, I have put everything on stop until it is finished. And you know, it’s a good problem to have. ”

Haley announced the project via Instagram on Dec. 9 at the same time as the T2 Agency posted on theirs. T2 Agency is a boutique literature and art agency dedicated to children’s books.

The book based on “Dolly Parton’s god-dog @btkthefrenchie follows French bulldog Billy the Kid as he makes his way to Nashville to follow his dreams and make it big. But when he runs into some bullies, he’ll need his favorite songs, a group of scrappy new friends, and his favorite country music star to regain self-confidence and be the star he always knew he could be.”