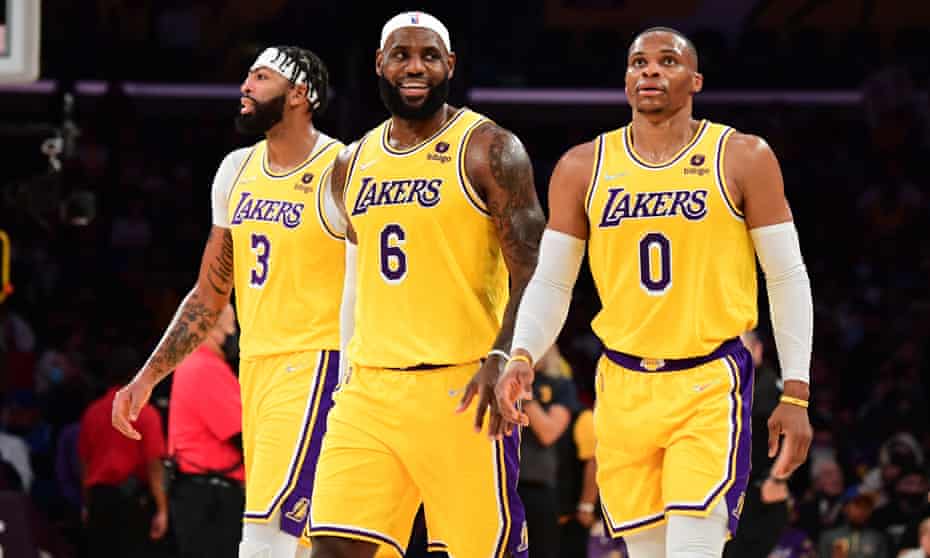 Before the start of the 2021–22 season, expectations were high for the Lakers. Many expected the team, led by LeBron James, Anthony Davis and the newly acquired Russell Westbrook, to return to championship form after a first-round playoff exit last year.

Fast forward to the end of the February and Los Angeles is well off the pace of the league’s top teams and narrowly holding onto a spot in the Western Conference play-in tournament.

Following the Lakers fifth loss in their last six games to the Pelicans on Sunday night, an graphic from August regarding the 2020 NBA champions started to make the rounds on social media once again. The graphic, posted shortly after a busy free agency period in Los Angeles, lauded the team’s depth after trading for Westbrook and signing numerous veterans such as Carmelo Anthony, Wayne Ellington, Dwight Howard and more.

Unfortunately, the “depth” that the Lakers amassed in the offseason hasn’t been on display for most of the year.

While James has continued to set the pace at 37, his two co-stars haven’t been able to match his level of output. Westbrook has struggled to acclimate to his fourth team in four years and is averaging some of the worst numbers of his career (18.2 points, 7.3 assists, 43.5% FG, 29.2% 3-PT FG). Davis didn’t look like his usual self to start the year and then suffered a mid-foot sprain just before the All-Star break that will sideline him for at least a month.

Two other notable veterans from the preseason Lakers graphic, Marc Gasol and Rajon Rondo, are no longer on the team. Los Angeles traded away both and landed little from Memphis and Cleveland in return.

Despite the occasional burst from the likes of Malik Monk, Austin Reeves and Stanley Johnson, the Laker’s role players haven‘t exactly flourished this season. Frank Vogel has done his best with the roster that’s been available to him, but the group seems to be missing crucial pieces that are needed to win a title.

With 22 games remaining, the Lakers (27–33) are ninth in the West and hold a 2.5 game lead on the Pelicans and the Blazers for the final play-in tournament spot. Although the team likely won’t miss out on the playoffs entirely, Los Angeles has a long way to go to prove that it belongs in the conversation about championship contenders.