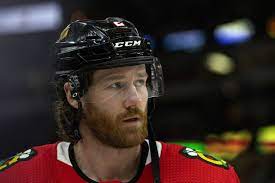 As unfathomable as it may sound in Chicago, Duncan Keith will end his NHL career wearing something other than a Blackhawks sweater.

A three-time Stanley Cup champion and the senior member of the Hawks at 37, Keith was traded to the Edmonton Oilers on Monday, closing the chapter on a 16-season run in Chicago.

“Duncan Keith was the ultimate professional with the Chicago Blackhawks,” Stan Bowman, Hawks president of hockey operations and general manager, said in a statement. “His toughness on the ice, his leadership in the community and his dedication to the game are a few of the reasons the Blackhawks won three Stanley Cups during his 16-year career with Chicago.

“He will go down as one of the best and most driven defensemen this game has ever seen. Recently, Duncan came to us with a request to be traded to a team closer to his son, and we were happy to work something out that was mutually beneficial for Duncan’s family and the future of the Blackhawks. We appreciate all he has contributed to our team and the city of Chicago, and his legacy will always be celebrated.”

“Life rolls on,” Keith said on a video conference, according to the Associated Press. “It’s tough to leave Chicago. I’ve been there for 16 seasons; I was drafted there. It’s a great organization. We were always treated first class as players and were really part of a transformation of that team, and I just feel grateful to have been a part of it and play with so many great players.”

The Oilers sent defenseman Caleb Jones and a conditional third-round draft pick to the Hawks for Keith and forward Tim Sunderland.

Keith carried a $5.538 million annual salary-cap hit for the final two years of his contract, about 6.8% of the Hawks’ cap space, according to CapFriendly.com. The Hawks will retain none of his salary, Sportsnet’s Elliotte Friedman reported. Jones’ $850,000 contract expires after next season.

Jones had four assists and a minus-7 rating in 33 games for the Oilers last season. The Arlington, Texas, native and left-handed shooter is the younger brother of Columbus Blue Jackets defenseman Seth Jones and the son of former NBA player and current Philadelphia 76ers assistant coach Popeye Jones.

“Caleb Jones is a smooth-skating, versatile defenseman who brings a well-rounded game to the Blackhawks,” Bowman said in a statement. “Caleb transitions the puck nicely with his legs or through outlet passes. He brings some size to our group, and we believe his best hockey is in front of him.

“While he is still young, we see his 93 games of NHL experience as an asset to help our other young defensemen adjust to the NHL.”

Keith’s departure and the addition of Jones, 24, kicks off the youth movement on the Hawks blue line in earnest.

The Hawks are pinning much of their hopes on the development of Adam Boqvist, who made strides last season but needs to work on conditioning and aspects of his defense. Young defensemen Ian Mitchell, Nicolas Beaudin and Wyatt Kalynuk saw significant ice time last season and will push during training camp to be included among next season’s regular pairings. Isaak Phillips and Chad Krys are also in the pipeline.

Connor Murphy began assuming a leadership role on and off the ice after he was named an alternate captain early this year. The Hawks also will have Nikita Zadorov in the fold if the sides can reach terms on a contract this summer, as well as Riley Stillman if the Hawks protect him from the expansion draft. The Hawks likely will expose Calvin de Haan to the draft.

For the Chicago Cubs’ Kris Bryant and Craig Kimbrel, it’s hard to escape the shadow of the trade deadline even at the All-Star Game »

Keith’s trade puts him closer to his roots in Western Canada, where he spends his off seasons in Penticton, British Columbia.

“I knew I didn’t want to go those long periods of time without seeing (his son),” Keith said on the video conference. “That was a huge thing for me, and I just felt like the Edmonton Oilers — right now it was a good fit, a great fit, and I’m excited to start this new chapter of my career.”

He had arguably his best season in 2009-10, when he scored a career-high 14 goals and matched his career best with 55 assists. He added a goal and six assists during the Stanley Cup Final against the Philadelphia Flyers, the first of three titles during the Hawks’ six-year “golden age.”

In the 2011 playoffs, Keith scored four goals and added two assists during a seven-game, first-round loss to the Vancouver Canucks. His second-period goal opened the scoring in a 2-0 win over the Tampa Bay Lightning that clinched the 2015 Stanley Cup in six games. He was awarded the Conn Smythe that year after totaling two goals and 18 assists in 23 postseason games.

For all of his accomplishments on the stat sheet, Keith made one of his most indelible impressions on fans on May 23, 2010, when he took a puck to the mouth that knocked out seven teeth during the Western Conference finals yet kept playing. Keith assisted on a goal to help complete a four-game sweep of the San Jose Sharks and clinch the Hawks’ first trip to the Stanley Cup Final since 1992.

“It’s just missing teeth,” Keith said at the time, according to NHL.com. “It’s a long way from the heart.”

He said Monday he feels like “I have a lot” left in the tank.