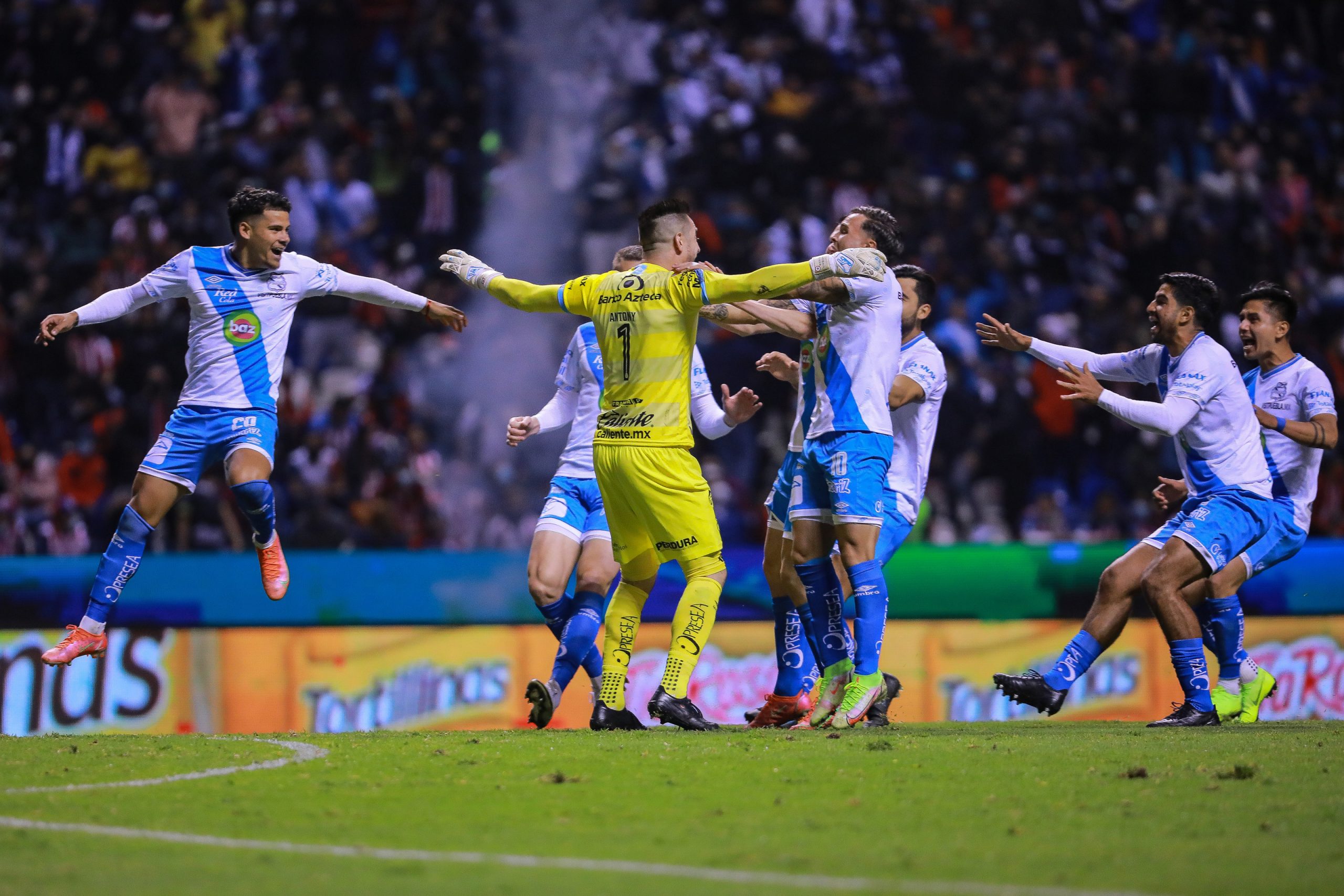 The Chivas ran away from an exhausted Pumas team to advance to the quarterfinal round of the Liga MX playoffs in the only wildcard game that did not end with penalty kicks.

Earlier Sunday, No. 5 seed Puebla escaped an upset bid by No. 12 Mazatlán with goalie Antony Silva playing the hero in the shootout.

The weekend results sets up an enticing “Liguilla” highlighted by the Tigres-Cruz Azul match-up and a Guadalajara derby pitting the No. 7 Chivas against defending Liga MX champion Atlas, seeded third.

The other two quarterfinal matches will see No. 1 Pachuca take on No. 10 Atlético de San Luis and an appealing 4 vs 5 clash (América vs Puebla).

Liga MX down to Elite Eight
Puebla entered the playoffs on a three-game losing streak and had been winless at home since Feb. 18. Despite facing the lowest seed in the Liga MX playoffs, Puebla coach Nicolás Larcamón knew his team had to get off to a good start against first-time playoff qualifier Mazatlán FC.

The Camoteros did just that, scoring twice off set pieces before the quarter-hour. But then “La Franja” appeared to tighten up, resorting to fouls and long clearances.

The visiting Cañoneros cut the deficit in half before the half then controlled most of the second half as Puebla seemed to lose its nerve. One minute into added time, Mazatlán found the equalizer off a corner kick with Cañoneros goalie Nicolás Vikonis contributing to the goal.

That sent the match to a shootout, the third straight Liga MX wildcard match to be decided from the penalty spot. Mazatlán shot wide with its first kick, then Puebla’s Silva stopped the third and fourth spot. When Israel Reyes converted his try, the Camoteros had defeated The Purple Gang 3-1 in the shootout.

Puebla’s reward is a meeting with the hottest team in Liga MX, No. 4 América who are on an eight-game unbeaten streak.

Chivas notch fifth straight win
Right behind the Aguilas on the “Who’s Hot” list is Guadalajara. The Chivas have won all five games since Ricardo Cadena took over on April 14.

The four-game win streak to close out the season lifted “El Rebaño Sagrado” into the No. 6 seed providing them a match-up against the busiest team in Liga MX.

The Pumas played eight games in April as they advanced through the Concacaf Champions League tournament, reaching the Final where they lost Wednesday in Seattle. At the same time, UNAM scrambled down the stretch to qualify for the Liga MX playoffs, doing so in the final game of the season.

As a result, “los Universitarios” were beat up and bone-weary, and with Alan Mozo and Higor Meritao out injured, they were short-handed as well.

Guadalajara started out strong, taking the lead when Christián Calderón outhustled Santiago Trigos to poke the ball past Alfredo Talavera. A defensive lapse allowed the Pumas to equalize just 7 minutes later, but the Chivas were in control by the half as UNAM players sat back and tried to catch their breath.

Six minutes after the restart, Fernando Beltrán completed a gorgeous play that saw him play wall passes twice while making a diagonal run into the box before slotting home past Talavera.

With the Pumas running on fumes, J.J. Macías (minute 87) and Alexis Vega (minute 89) finished off fast breaks to make the final score 4-1, setting up a fantastic quarterfinal pairing – a “Clásico Tapatío” – with the Liga MX champs.