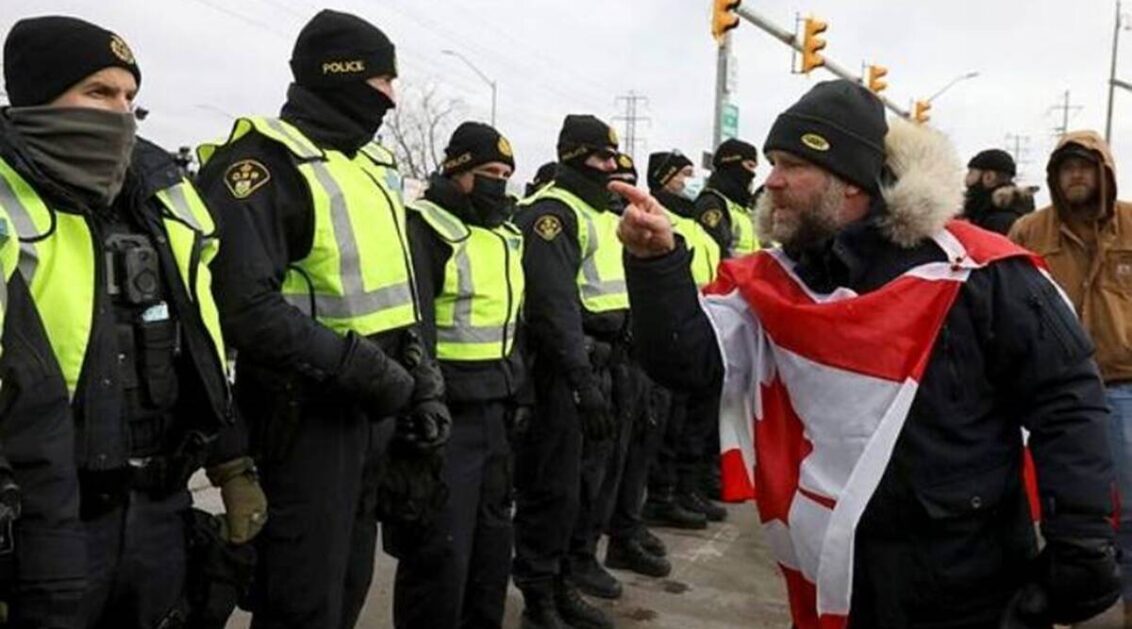 The organizers include former law enforcement officers, military veterans and conservative organizers who are steering unrest that has sent shock waves throughout Canada.

Since the big rigs entrenched in the core of Canada’s capital first pulled in nearly three weeks ago, they have arranged themselves in a semblance of order, parking in evenly spaced rows. Their drivers have stayed warm and are fed by a corps of marshaled volunteers, and though they have varying personal beliefs, they appear carefully on-message: “Freedom!” has been the repeated refrain for the past 19 days.

It is no accident: High above the clot of trucks on Ottawa’s Parliament Hill, in hotel rooms just out of the fray, are the war rooms behind the operation. From them, a team of self-appointed leaders, some with military and right-wing organizing backgrounds, have orchestrated a disciplined and highly coordinated occupation.

They have spent the weeks huddling in conference rooms and streaming their own news conferences on social media platforms from hotel lobbies. It is a crew that includes former law enforcement officers, military veterans and conservative organizers, a sometimes fractious collaboration that has nonetheless helped to coalesce a demonstration against vaccine mandates into a force that has destabilized the city and sent shock waves throughout Canada.

And while the main blockade that had crippled trade and stalled commercial traffic for nearly a week at the main border crossing between Canada and the United States reopened this week, the protesters in Ottawa largely haven’t budged.

Canadian officials, who do not have authority to tell the police how to operate, have become increasingly frustrated with the occupation and see the coordination not as a polished demonstration, but a dangerous threat.

“What is driving this movement is a very small, organized group that is driven by an ideology to overthrow the government,” Marco Mendicino, the public safety minister, said in remarks on Tuesday. “Through whatever means they may wish to use.”

The protesters’ efforts seemed to be rewarded on Tuesday by the resignation of Ottawa’s police chief, who had faced mounting criticism for the tepid response to the demonstrations in the capital since the start of the occupation. As news of the chief’s departure reached the encampment Tuesday, jubilant honking blared through the city.

Peter Sloly, the police chief, resigned a day after Mr. Trudeau took the rare step of declaring a national public order emergency that extended more robust policing measures across the country. His invocation of the Emergencies Act also took aim at both protester fund-raising, which has been deemed a criminal activity, and the demonstrators’ personal and business bank accounts.

The new public order threatens to unravel a group already at pains to project credibility. Its underpinnings — as a hodgepodge of people suffused in counterfactual belief systems, conspiracy theories and barely bridled rage at anything seen as contrary to their mission — frequently erupt through the official veneer.

At a news conference in the Sheraton Ottawa Hotel on Monday, opened to media other than solely conservative-leaning news outlets for one of the first times, there was an air of gravitas in a room that echoed with the constant coughing of dozens of maskless supporters.

“Some of you might oppose our grievances,” Tamara Lich, one of the most visible group leaders, said to the television cameras. “However, democratic society will always have non-trivial disagreements, and righteous dissidents.”

But when a television reporter, Glen McGregor, asked about a large cache of weapons found that day at a protest in Alberta, others in the conference room became enraged, shoving the reporter and calling for his ejection with yells of “how dare you!” as Mr. McGregor and his television crew fled into the street. Tom Marazzo, a spokesman, later defended the action.

What messaging discipline exists comes from the early public face of the effort, Ms. Lich, said Jay Hill, the interim leader of the Maverick Party, a small right-of-center group based out of Calgary, Alberta, created to promote the separation of Canada’s three western Prairie Provinces from the rest of the country. Ms. Lich has deep ties to the group.

Even before the convoy assembled, its messaging was Ms. Lich’s preoccupation, according to Mr. Hill, who said she called him several times even before arriving in Ottawa to strategize.

“We had a number of discussions about staying on message, about the need in this modern-day world of politics to have a very clearly defined message that is understandable and simple, a message that people can grasp hold of and run with,” he said. “Tamara clearly understands that.”

Ms. Lich played a leading role in organizing a GoFundMe campaign for the protests that raised $7.8 million before the crowdfunding site shut it down after receiving “police reports of violence and other unlawful activity,” GoFundMe said.

Previously, Ms. Lich worked as a personal trainer in Medicine Hat, Alberta, a town once dubbed “Hell’s Basement,” by Rudyard Kipling for its location on top of huge natural gas field.

Zach Smithson, an employee at Body Building Depot Fitness Emporium, where Ms. Lich used to work, said she has since become the talk of the town.

“I think we are all very proud of her,” he said.

Ms. Lich did not respond to a call and text message requesting an interview.

B.J. Dichter, an official spokesman for the convoy, said he joined the effort after Ms. Lich sought help managing the swell of donations flowing into a GoFundMe page. Mr. Dichter has a history of spouting anti-Islamist views and once said that “political Islam” is “rotting away at our society like syphilis.” He has rejected claims of racism.

“I’m Jewish,” he told the journalist Rupa Subramanya. “I have family in mass graves in Europe. And apparently I’m a white supremacist.”

Within the occupiers’ tightly managed ground operations, there are military hallmarks, outlined and executed by the several higher-ups who have backgrounds in the armed forces and law enforcement, according to Mr. Marazzo. He said he spent 25 years in the military, and with his measured tones he is frequently deployed as the spokesman for the group.

“This was a grass-roots convoy that just left their homes and headed for Ottawa,” said Mr. Marazzo, a former instructor at Georgian College in Ontario who added that he was fired because of his anti-vaccine beliefs. “They’ve deployed to the field without really knowing who our commanding officers were, who were the platoon commander, and who were the captains — That was a team effort.”

On the ground, the organizers have established a sophisticated infrastructure that includes oversight of each occupied street by a so-called road captain, with sections divided and overseen by block captains who operate below them. The captains check in on the drivers ensconced in their cabs, delivering things like hot breakfasts — doling out so much food that some protesters said they have to turn it away.

The protesters’ coordinated responses seek to outfox law enforcement. After the police threatened to arrest people refueling the trucks last week, demonstrators filled red and yellow jerrycans with water to provide cover to those who were in fact supplying gasoline.