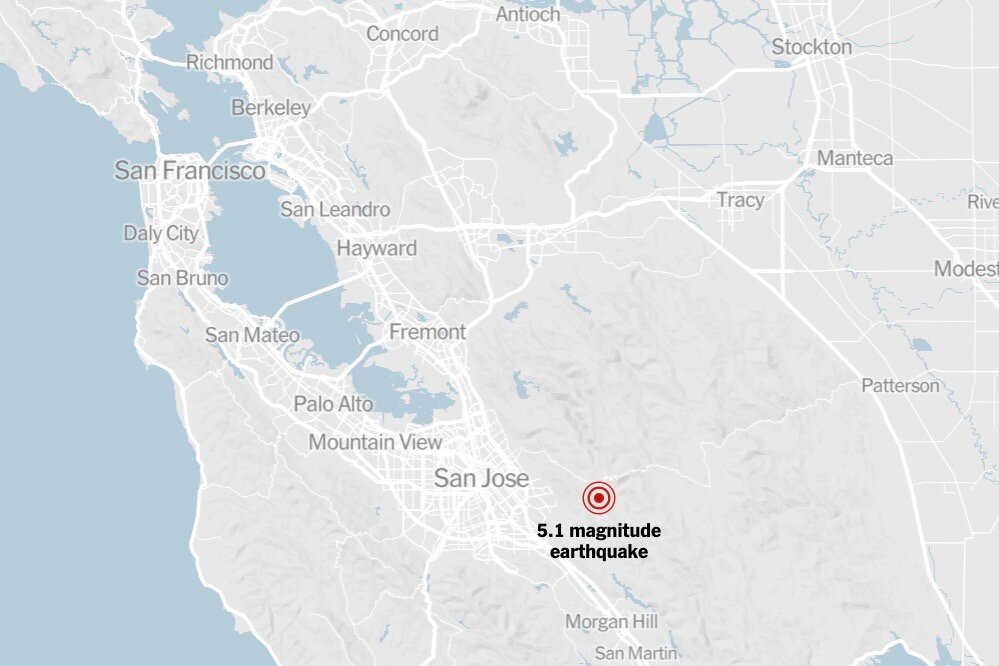 A magnitude 5.1 earthquake that struck Tuesday morning near San Jose could be felt in the Valley, with numerous tweets from people who reported the shaking.

The quake struck at 11:42 a.m. near Seven Trees, California, the U.S. Geological Survey reported. A second 3.1 magnitude aftershock struck shortly after, at 11:47, the USGS reported.

There were no immediate reports of injuries or damage, but several Bay Area cities dispatched crews to assess possible damage, the Mercury News reported.

The epicenter was in the region of Joseph Grant Ranch County Park, about 12 miles east of San Jose near the Calaveras Fault, the newspaper reported.

The transit agency said all 57 trains in service during the quake—except those in the Transbay Tube—were held for five minutes in case the 5.1 tremor was followed by a larger one.

By 11:55 a.m., the trains started moving again at slower speeds, officials said on Twitter. The post-quake pause caused delays for most trains of about 12 to 15 minutes.

Lucy Jones, the retired U.S. Geological Survey seismologist, said it was the largest earthquake in the Bay Area in 15 years. She told NBC Bay Area it was followed by aftershocks that measured 3.1 and 2.2.

This 5.1 earthquake was the third-largest since 2000 to hit the area surrounding the San Francisco Bay. It shook the Sargent Fault, running beneath Santa Clara County, which was also the site of 2007’s magnitude 5.5 quake centered near East Foothills.

Another data point for earthquake followers: Three of the Bay Area’s Top 5 quakes happened in October, a prime time for “earthquake weather,” a season that has been formally debunked by USGS scientists.

The U.S.G.S. called it a “notable quake,” but described the intensity of shaking from the earthquake as weak to moderate. The agency said that about 18,000 people across the Bay Area and beyond had reported that they felt the earthquake.

In California, about two or three strong earthquakes are recorded each year with a magnitude of 5.5 or greater, causing moderate damage to buildings and other structures, according to the state Department of Conservation.(NY Times)