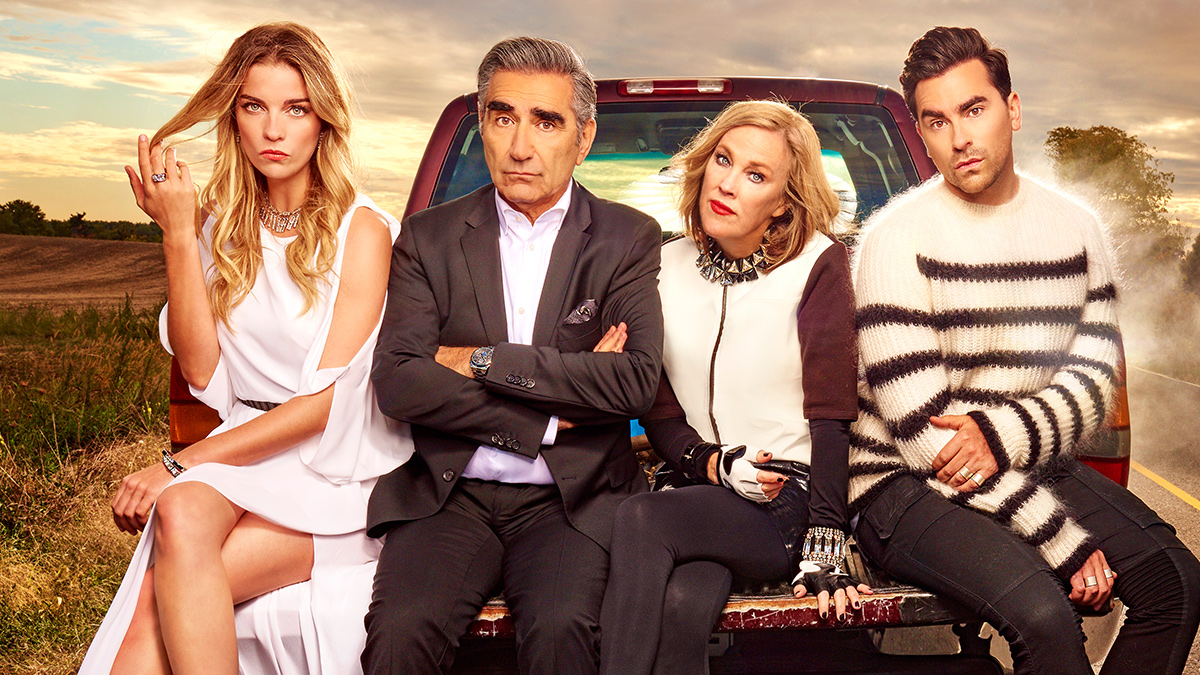 It can’t be easy to lose everything and have to upend your family that has enjoyed every luxury there is to a Podunk town to live in a motel, but Johnny manages to repeatedly find the silver lining in the midst of their new and unfamiliar hardships.

He goes from being the founder and CEO of one of the nation’s largest chains of video stores to struggling to make ends meet. He humbles himself into applying for unemployment, asking his son for financial help, and fixing things around the motel—all to make his family’s adjustment a little easier.

David and Patrick’s relationship is romantic and charming and totally normal in every way. The show’s creator, Daniel Levy, has spoken about how important this was to him and what a huge step change it was for American television.

A documentary about the show reveals that a group of more than 1,800 mothers of LGBTQ kids wrote to the cast of Schitt’s Creek to thank them for everything the show had done for their kids.

It read, in part: “Your commitment to represent love and tolerance in your show is so important to families like ours. Your willingness to explore, inform and educate about LGBTQ people and their relationships in an entertaining but respectful and positive manner sets a tone that is often missing … We sincerely believe that shows like Schitt’s Creek will serve as a catalyst to help change the world into a kinder, safer, more loving place for all LGBTQ people to live, and because of that we will remain forever grateful.”

The Rose family has expensive taste in clothes, and they keep up appearances while living in the small, rural town of Schitt’s Creek. Fashion is important to each and every one of them, and they express themselves with aplomb.

Moira is the most flamboyant of the bunch, and adds a touch of theatrics with her ever-changing rotations of wigs, but the kids, David and Alexis, have their own unique flair, too.

David sticks with black and white, but his monochromatic style is anything but boring. Alexis looks like she’s on her way to Coachella most of the time with bohemian, flowy dresses, floppy hats, and feathers—having to wear scrubs for her job takes some serious adjusting for the fashionista.

Johnny’s wardrobe is nothing to scoff at, though he is the most reserved out of the four of them. Impeccably tailored suits make up the patriarch’s closet.

The writing is quick and whipsmart, you almost feel like you miss a hundred funny jokes or one-liners by the time you reach the end of an episode which, in turn, makes you want to immediately rewatch it. And that it’s delivered so well by each and every actor in the cast makes it even better.

There are a lot of little things that add so much to the overall appeal of the show. For example, the menus at the local diner are comically huge—even by the third season, I’m still laughing at the characters opening them up.

Another detail that never fails to be funny is Bob’s little jog. He does it everywhere he goes and it does not get old.

The writers and the actors pay attention to these nuances, and the show benefits enormously from their meticulous care.