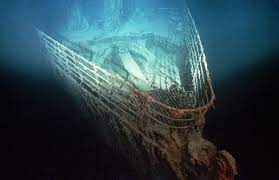 Since the hulking ship was found upright and split in two sections in 1985, less than 400 miles off Newfoundland, it has captivated historians, archaeologists and others

New footage of the Titanic wreckage released last week by a commercial exploration company shows the doomed ship in vivid detail and highlighted that the world for wealthy tourists not only extends to space, but also the deep sea.

The one-minute clip was shared by OceanGate Expeditions, a company that takes paying tourists in submersibles to shipwrecks and underwater canyons. For the Titanic expedition this summer, guests paid $250,000 to take a submersible down about 2.4 miles to where the wreckage rests on the seabed.

Since the hulking ship was found upright and split in two sections in 1985, less than 400 miles off Newfoundland, it has captivated historians, archaeologists and others. Stockton Rush, the president of OceanGate, said private exploration was needed to continue feeding this fascination.

“No public entity is going to fund going back to the Titanic,” Rush said. “There are other sites that are newer and probably of greater scientific value.”

OceanGate has now led two expeditions to the site and has one planned for 2023. The dives last about eight hours, including the estimated 2.5 hours each way it takes to descend and ascend.

Scientists and historians provide context on the trip and some conduct research at the site, which has become a reef that is home to many organisms. The team also documents the wreckage with high-definition cameras to monitor its decay and capture it in detail.

But the high-quality footage of the ship’s bow, anchor and an anchor chain does not impress everyone.

Paul F. Johnston, curator of maritime history at the Smithsonian’s National Museum of American History, was not awed by the footage and said that the OceanGate trips were “people paying a lot to be ballast.”

“I don’t object to this kind of commercial exploitation because they’re not touching or damaging the wreck,” Johnston said. “And it brings attention to the underwater world and to shipwrecks in general, but in my opinion, there’s not that much to be learned from Titanic that we don’t already know.”

There has been a debate for decades about who should visit the wreckage and why.

More than 1,500 of the Titanic’s passengers died, raising ethical questions about disturbing a site that may also function as a graveyard. About 700 people survived.

Many historians and scientists have also opposed efforts to pull artifacts from the site onto land. Johnston was one of several scientists to write to a court in support of the U.S. government’s attempt to stop an underwater salvage company from trying to recover a Marconi telegraph from the wreckage.

In May 2020, a federal judge granted approval to the company, RMS Titanic, though its plans were delayed by the pandemic. RMS Titanic is now reviewing images from the wreck site to see if its original recovery plans will still work, the company’s president, Jessica Sanders, said in an email.

Don Lynch, the official historian for the Titanic Historical Society, said he did not like for Titanic artifacts to be brought up, but he was impressed with the quality of the new OceanGate footage.

“The more they photograph then probably there will be things we discover that we didn’t see before or something like that,” he said. “But I can’t say there was anything that was a real discovery now. It’s just amazing to see with such clarity.”

Most people who watch the video on YouTube, which has drawn more than 1.7 million views, will not be able to appreciate how detailed the footage is because it is in 8K resolution, which is much higher than the resolution of most televisions and computer screens.

But Rush, the OceanGate president, said that the high quality of the footage allowed researchers to get an even closer look at the site without having to go underwater. He said it could also be used to create an immersive experience with 30- to 40-foot screens, similar to the Vincent van Gogh exhibitions that project the artist’s work on walls and floors.

Rush compared the OceanGate trips to space tourism, a growing industry best known for the commercial spaceflights offered by three billionaire-led companies. He said that similar to the space industry, the commercial trips were the first step to expand the use of the submersibles for industrial activities, such as inspecting and maintaining underwater oil rigs.

“For those who think it’s expensive, it’s a fraction of the cost of going to space and it’s very expensive for us to get these ships and go out there,” Rush said. “And the folks who don’t like anybody making money sort of miss the fact that that’s the only way anything gets done in this world is if there is profit or military need.”