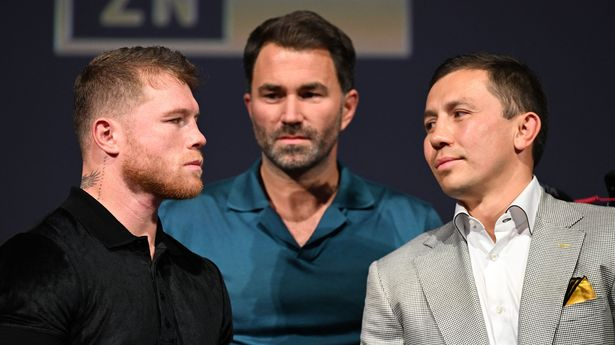 For the third and perhaps final time, Canelo Alvarez and Gennadiy Golovkin engaged in an icy stare-down after stepping on the scales.

Surrounded by a festive atmosphere Friday outside T-Mobile Arena on The Strip, where they’ll meet Saturday (8 p.m. ET, DAZN PPV) in a trilogy fight for the undisputed super middleweight championship, Alvarez weighed 167.4 pounds while Golovkin was 167.8.

“I want to finish it inside 12 rounds and I’ll be looking for it from the first round,” said Alvarez, who was wildly cheered by a large contingent on hand for Mexico’s Independence Day weekend. “I know it’s not going to be easy, he’s a great fighter.”

The 40-year-old Golovkin will compete at 168 pounds for the first time following a legendary middleweight run, where he still holds two 160-pound titles.

When they met in September 2017, Alvarez and Golovkin (42-1-1, 37 KOs) fought to a controversial draw in an all-action fight. Golovkin was bitter afterward, resolved in his belief he won the fight.

One year later, Alvarez won the rematch via majority decision, but the victory was far from convincing.

As for the undercard, the front-runner for Fighter of the Year, Jesse “Bam” Rodriguez, weighed 114.8 pounds ahead of his first junior bantamweight title defense.

The 22-year-old Rodriguez (16-0, 11 KOs) has enjoyed a breakout campaign with a pair of stoppage victories over former champions Carlos Cuadras and Srisaket S or Rungvisai.