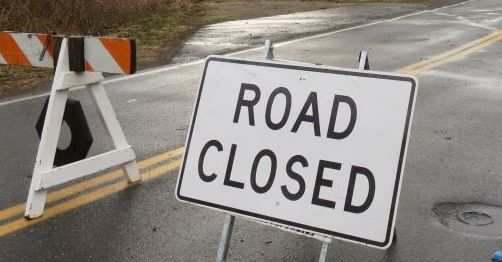 More than two dozen roads were impassable because of rising floodwaters and in low-lying areas across lowland Whatcom County Monday, Nov. 15, including Slater Road south of Ferndale, Hannegan Road south of Lynden, Guide Meridian south of Lynden, Highway 9 in Acme, Main Street in Everson and Lake Whatcom Boulevard near Glenhaven.

Several streets were closed in Bellingham, including Lakeway Drive from Yew/Woburn street to Clearbrook Drive, Squalicum Parkway from Meridian Street to Roeder Avenue, Meridian Street from Interstate 5 to Bakerview Road and Iowa Street from Pacific to King streets, and Hannegan Road, according to an email from Mike Olinger, assistant director of the Bellingham Public Works Department’s Operations Division.

Some side streets were closed because of “significant water over the roadway,” Olinger told The Bellingham Herald.

“Many of these closures are related to creeks being full and unable to take any more water. Baker Creek on Meridian has crested and is now flowing down Meridian,” he said.

The Bellingham Fire Department reported a “busy” night with several cars becoming stranded in water that was over the roadway.

“We need people to avoid driving through standing water and to honor the road closed signs,” department spokesperson Dave Pethick told The Herald. “The water is powerful, and it can be deep.

“Even in the city we’ve had a bunch of cars that drove into the water and just got stuck. It’s unusual for us, but there are areas of urban flooding, and people need to take heed.”

To report significant flooding or downed trees on Bellingham streets, use SeeClickFix or call 360-778-7700.