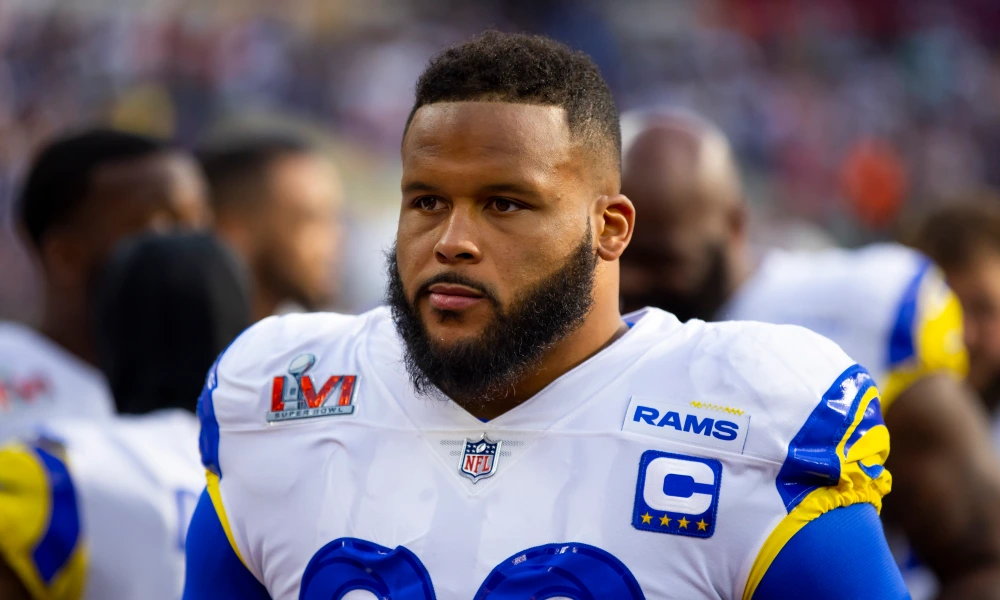 The Los Angeles Rams defensive tackle has spent the bulk of his career as arguably the best player in football. His current deal doesn’t pay him as such. Armed with a Super Bowl ring and all the personal accolades an NFL defender can accomplish, Donald is saying that he’s fine with retiring at 31 years old if he and the Rams don’t come to terms.

He started the chatter before the Super Bowl and doubled down on Monday on the “I am Athlete” podcast alongside retired NFL players Brandon Marshall and Pacman Jones. Per a ProFootball Talk transcript, Donald repeated four times during his appearance that he’s “at peace” with his NFL career. But it sounds like he’s game to keep playing as long as the money’s right.

So it appears to be about winning for Donald. And business. Which all makes sense.

Aaron Donald #99 of the Los Angeles Rams celebrates after defeating the Cincinnati Bengals during Super Bowl LVI at SoFi Stadium on February 13, 2022 in Inglewood, California. The Los Angeles Rams defeated the Cincinnati Bengals 23-20.
Everything else is gravy for Aaron Donald’s football career. He understandably would like to have more.
Where Donald’s contract status stands
Donald has three years remaining on the six-year, $135 million deal that he signed in 2018 and has since outperformed as the market’s moved in his favor. He also has significant leverage in that he could certainly afford to retire with no qualms.

While it may be a negotiating tactic, the fact that he could call it quits with a Super Bowl ring, seven All-Pro nods, three Defensive Player of the Year trophies and a first-ballot ticket to the Pro Football Hall of Fame in his pocket is compelling. His $97 million in career football earnings certainly helps his case.

But he’d certainly like to earn more, which in this case likely means exceeding the $28 million T.J. Watt’s slated to make annually as the highest-paid defender in football. Competing for another Super Bowl would sweeten the deal.

But if it doesn’t happen, Donald will be fine. Just ask him.

“I don’t need to play football to be fine,” Donald continued. “I’m fine. I was blessed to play this game, to make the money I made. The accomplishments I made in eight years is like — I’m complete. If I can win another one, that’s great. But if not, I’m at peace.”