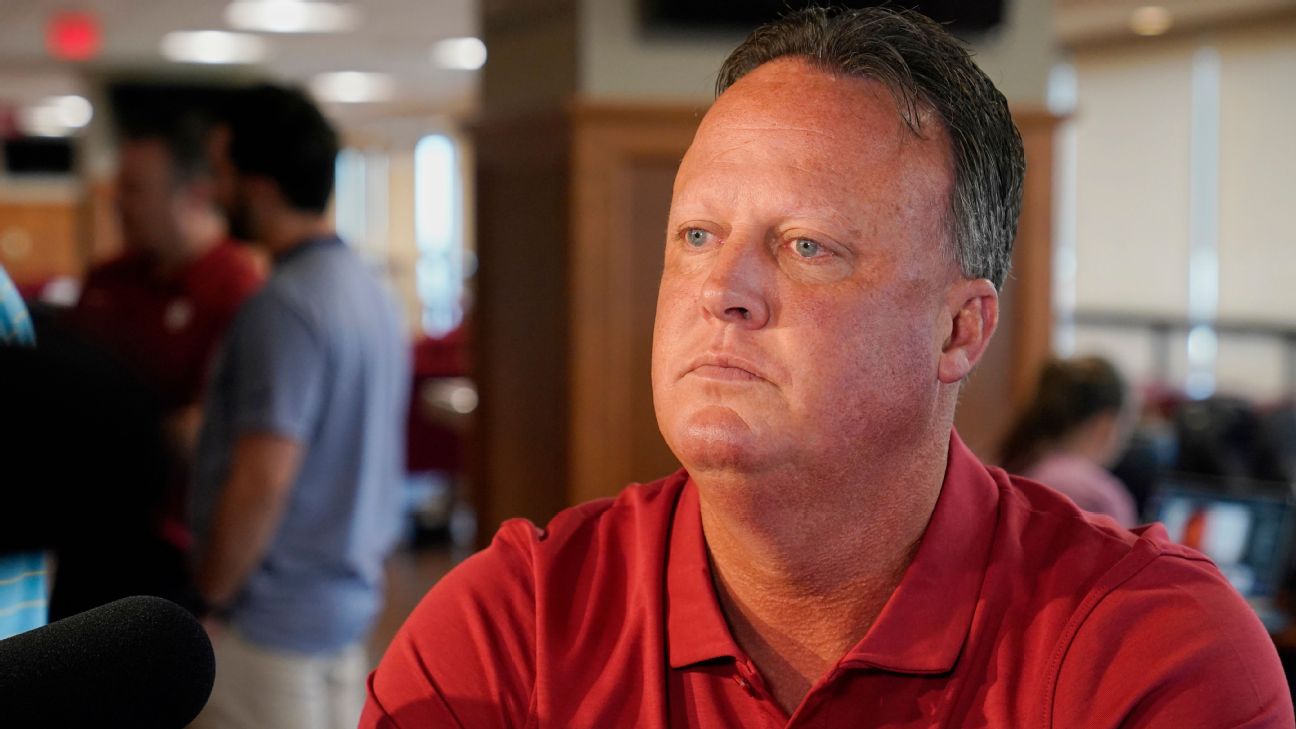 “I moved to Norman fresh out of high school in 1990,” Gundy started in a lengthy statement. “It feels like I never left. I have devoted nearly all my adult life to Oklahoma football. My children graduated graduated OU; so did my wife. For almost three decades, this university has been my home, these players have been my family. Today, with great anguish, I announce my resignation. I apologize to those who are disappointed by this news…

“I owe it to Sooner Nation to be transparent about what led to this decision: Last week, during a film session, I instructed my players to take notes. I noticed a player was distracted and picked up his iPad and read aloud the words that were written on his screen. The words displayed had nothing to do with football. On particular word that I should never—under any circumstance—have uttered was displayed on that screen. In the moment, I did not even realize what I was reading and, as soon as I did, I was horrified.

“I want to be very clear: the words I read aloud from that screen were not my words. What I said was not malicious; it wasn’t even intentional. Still, I am mature enough to know that the word I said was shameful and hurtful, no matter my intentions.

“I want to be very clear: the words I read aloud from that screen were not my words. What I said was not malicious; it wasn’t even intentional. Still, I am mature enough to know that the word I said was shameful and hurtful, no matter my intentions.

“The unfortunate reality is that someone in my position can cause harm without ever meaning to do so. In that circumstance, a man of character accepts accountability. I take responsibility for my mistake. I apologize.

“While considering this decision, I have been overwhelmed by the love and support of those who know me, my character and my love for this program. I truly appreciate the support my players and coaches have shown. That support means more to me than I can express; it proves what I’ve always know about #OUDNA—we are a family, so thank you.

“Nevertheless, I recognize this is a critical moment for Oklahoma football. This team—its coaches, players, administration and fans—do not deserve to be distracted by off-the-field matters while working to continue the tradition of excellence that makes me so proud to be a Sooner. I won’t do the program I love the disservice of distracting from this mission. Effective immediately, I am stepping down.

“Naturally, I leave these sidelines heavy hearted. Coaching this football team truly has been my life’s passion. But I leave confident that the team will continue to prosper and I leave with tremendous love for the University of Oklahoma and its athletics department. Sooner born, Sooner bred, and so on…

In Gundy’s place, L’Damian Washington will take over. Washington has currently been working as an offensive analyst, and he’ll be elevated on an interim basis, head coach Brent Venables announced in acknowledging the news.

“It’s with sadness that I accept Coach Gundy’s resignation,” Venables started in his likewise lengthy statement. “He’s dedicated more than half of his life to Oklahoma Football and has served our program and university well. We’re thankful for that commitment. We also acknowledge that in stepping aside he’s placed the program and the welfare of our student-athletes first. In coaching and in life, we’re all accountable for our actions and the resulting outcomes.

“The culture we’re building in our program is based on mutual respect. Our staff is here to develop successful student-athletes, but also young men of character. As the leaders of this program, it’s essential that we hold ourselves to the highest standards as we model for our players the type of men we want them to become.

“Damian Washington, who has been serving as an offensive analyst for our program, will coach our wide receivers on an interim basis.”

Gundy, one of only three remaining members from Bob Stoops’ original 1999 coaching staff—Venables was co-defensive coordinator and Jerry Schmidt was strength and conditioning coach—is the program’s all-time leader in victories (277). That includes 246 as a coach and 31 as a player.

He’s the only assistant who hasn’t left campus since 1999. During that time, he’s produced some of the program’s best players both at running back and wide receiver.

In 2004, Adrian Peterson set the NCAA freshman rushing record with 1,925 yards, the best single-season mark in Oklahoma history. In 2010, DeMarco Murray broke Steve Owens’ 41-year-old Oklahoma record for career touchdowns, Joe Washington’s 35-year-old mark for all-purpose yards and the program’s single-season mark for catches by a running back (71). Murray’s 1,571 career receiving yards under Gundy’s tutelage are also an Oklahoma running back record. Samaje Perine, Gundy’s star pupil in 2014, set the FBS single-game rushing record with 427 yards vs. Kansas on his way to 1,713 rushing yards, the second-highest total by a freshman in school history behind only Peterson’s total 10 years earlier. At receiver, Gundy mentored Sterling Shepard to 2015 ESPN.com first-team All-America and first-team All-Big 12 honors.

As a player, Gundy was a four-year starter and prior to Stoops’ arrival held just about every OU single-game, single-season and career passing record. Gundy started off his career by claiming Big Eight Offensive Newcomer of the Year in 1990 with 54 completions for 904 yards on 109 attempts. He guided the Sooners to a 31-13-2 (.705) record and earned All-Big Eight First Team honors as a senior. Gundy is one of nine players in Sooner history to have thrown for at least 4,000 yards.

This, of course, marks the end of a long era. And it comes at the start of the beginning of another era, with Venables set to step on the sidelines as a head coach for the very first time in a matter of 27 days.