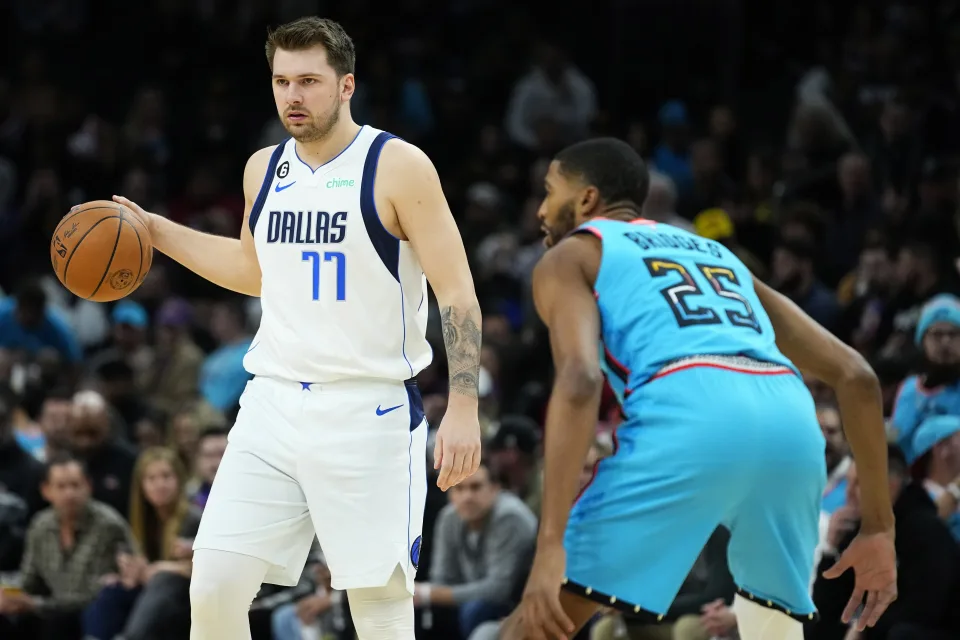 Luka Doncic left the game in the opening minutes on Thursday night without scoring for the first time in his NBA career.

Dorian Finney-Smith had 18 points and 12 rebounds, Dwight Powell added 15 points, Tim Hardaway Jr. scored 11 and Reggie Bullock had 10 for Dallas, which won for just the third time in 10 games.

Early in the first quarter at the Footprint Center, Doncic threw a pump fake in the post while trying to make a move to the rim. As he spun around and planted, his left foot got tangled up with Mikal Bridges’ foot and rolled on its side. Doncic immediately started limping, and quickly walked off to the locker room.

“He looked good, looked fine,” Kidd said. “But we’ll see how he feels as we go forward here. We’ll have probably more information once we get to Utah.” The Mavericks play the Jazz on Saturday night.

With just under nine minutes to play versus the Suns, Doncic tried to drive to the basket but was cut off by Cameron Johnson and had to spin back the other way. As he did so, he stepped right on Mikal Bridges’ foot and awkwardly rolled his left ankle. He immediately winced in pain and hobbled back down the floor. After Torrey Craig hit a 3-pointer, the Mavericks called a timeout to get Doncic out of the game.

Doncic’s ankle has been giving him issues for a few weeks, and he’s popped up on the injury report on a regular basis. However, he’s only missed two games along the way, one on Jan. 8 vs. the Oklahoma City Thunder and another on Jan. 15 versus the Portland Trail Blazers.

When Doncic has been on the floor lately, he’s performed to his usual level; in his last outing prior to Thursday, he put up 41 points, 15 rebounds and six assists on 16 of 29 from the field in the Mavericks’ loss to the Washington Wizards. For the season he is leading the league in scoring at 33.8 points per game.

Prior to Thursday’s game, Doncic was named a starter for the 2023 NBA All-Star Game in Salt Lake City next month. This will be the fourth consecutive All-Star appearance for Doncic, who has made the game every season since his rookie campaign.