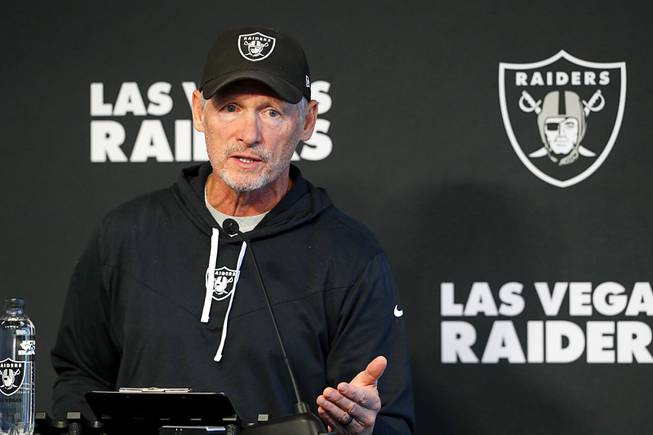 The Raiders weathered adversity throughout a tumultuous 2021 season and still managed to make the playoffs.

An offseason of change, however, is underway as Las Vegas is firing general manager Mike Mayock, NFL Network Insider Ian Rapoport reported. The decision was made several days ago, but was not made official Monday until after the team had submitted interview requests for potential successors, Rapoport added.

“We have relieved Mike Mayock of his duties as General Manager of the Las Vegas Raiders,” the team said in a statement. “We thank Mike for his contributions over the last three years in helping to form the foundation for the franchise to build upon in its future.”

Mayock’s tenure ends with a 25-24 record after three years, which included the 2019 NFL Draft in which he and then-head coach Jon Gruden spent three first-round picks on Clelin Ferrell, Josh Jacobs and Johnathan Abram and scored star edge rushery Maxx Crosby in the fourth round. More than half of Mayock’s first draft class has proven to be valuable contributors, with Jacobs becoming Las Vegas’ bell-cow running back (when healthy) and receiver Hunter Renfrow (fifth round) developing into a trusty target on third down.

Mayock’s drafts have been far from perfect, though, especially when examining his highest selections. Cornerback Damon Arnette, the 19th overall pick of the 2020 draft, was a disappointment when with the Raiders and was released in 2021 after he appeared in a viral video in which Arnette was seen brandishing a gun and threatening to kill someone. Receiver Henry Ruggs III, the 12th overall pick of that same class, was released in 2021 following his arrest and charged for multiple felonies related to his role in a fatal traffic collision.

As for the 2021 draft, Mayock again raised eyebrows when he spent Las Vegas’ first-round pick on Alabama offensive tackle Alex Leatherwood, who struggled at the position in his rookie season and eventually switched to guard during the 2021 campaign.

Mayock, who was brought in by Gruden to replace Reggie McKenzie, had his minor victories as GM, adding key players like Crosby, Renfrow, tight end Foster Moreau, receiver Bryan Edwards and safety Trevon Moehrig in the second round or later in his three drafts. Mayock also acquired key contributors via free agency and trades, including edge rusher Yannick Ngakoue, receivers Zay Jones and DeSean Jackson and cornerback Casey Hayward.

The strength of the Raiders’ roster was tested following the in-season departure of coach Jon Gruden, who resigned following the revelation of multiple emails reportedly dating back to 2010 in which Gruden used racist, homophobic and misogynistic terms. Special teams coordinator Rich Bisaccia was tabbed as Gruden’s interim replacement and went on to lead the Raiders on an unlikely run to the postseason, winning each of their final four games to secure a wild-card berth.

Las Vegas’ run of success ended with Saturday’s wild-card loss to the Cincinnati Bengals, forcing the Raiders to pivot toward an offseason that is expected to include significant changes starting with Mayock’s departure. His replacement will be tasked with identifying a permanent head coach for the Raiders, as well as determining the franchise’s future at quarterback.

Las Vegas is expected to conduct a full and thorough coaching search with the start of the offseason, and Derek Carr’s future will be tied to it, Rapoport reported Saturday. With Carr entering the final year of his five-year, $125 million deal, the two sides have a mutual decision to make this offseason and the choice of head coach will be a factor, per Rapoport.

Bisaccia is expected to be considered for the position, which is logical considering his commendable performance in a difficult spot, and owner Mark Davis still plans to interview him, Rapoport reported. The coaching search will extend beyond Bisaccia, adding uncertainty to a Raiders club that is now looking for new leadership at more than just head coach. The team put in requests to interview New England Patriots defensive assistant Jerod Mayo for head coach and Pats director of player personnel Dave Ziegler for general manager, as aforementioned prior to firing Mayock on Monday. The team is also expected to put in a GM interview request for Indianapolis Colts executive Ed Dobbs and has an in-house candidate in assistant director of player personnel DuJuan Daniels, Rapoport added.