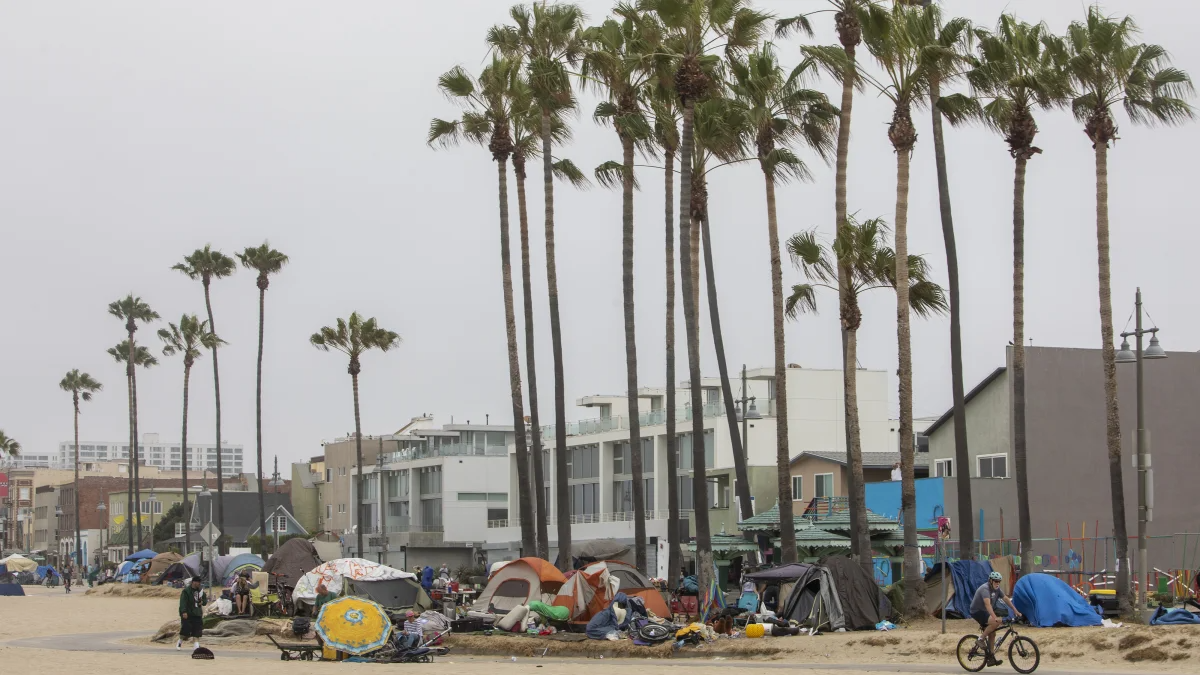 According to the San Diego Regional Task Force on Homelessness, the 2022 Point-in-Time Count found at least 8,427 people in San Diego County experiencing homelessness. The task force said that is a 10% increase since 2020.

According to the city’s last update in May, the homeless population is more than 4,800 in city limits, which include 2,307 sheltered and 2,494 unsheltered.

The city boasts that since the summer of 2021 when Mayor Todd Gloria created the Homelessness Strategies and Solutions Department, the city has increased shelter capacity by 28%, worked to create more permanent housing and expanded street outreach.

Jeff Olivet with The United States Interagency Council on Homelessness, who provided a federal update to the city council, said he saw a humanitarian crisis while visiting San Diego a few weeks ago. He said homelessness was on the rise prior to the pandemic.

“Homelessness is a crisis, it’s a life-or-death issue,” he said.

Olivet added that leaders coming together across party lines works, and that setting goals and having people who previously experienced homelessness have a seat at the table will be instrumental in the fight against this crisis. He said, “criminalizing people because they are homeless is not the solution.”

Olivet shared a report from federal funding with The American Rescue Plan Act, which he said has put billions of dollars to fight homelessness across the country. San Diego is one of more than 100 cities that is part of the “House America” initiative, which has a goal to add new units of affordable housing and re-house households experiencing homelessness — which the city is on track to meet its goal by the end of the year by re-housing more than 2,000 households.

The council voted to pass an agreement between the San Diego Housing Commission and People Assisting the Homeless to partner and operate the city’s Multidisciplinary Outreach Program for $632,013 for a nine-month term beginning October 1, 2022. There are options for renewal based on city funding.

The funding includes $7,263 for a one-time startup expense. The money is set to come from the “City of San Diego General Fund and Homeless Housing, Assistance, and Prevention Program funds from the Regional Task Force on Homelessness,” according to the city.

PATH will operate the program and is expected to “collaborate and subcontract with Father Joe’s Villages (FJV) for the healthcare component. The program utilizes an integrated multidisciplinary team that will include a nurse practitioner, four clinical outreach specialists, a medical assistant/outreach worker, two peer support specialists, and a part-time substance abuse counselor.” This will include access to FJV’s psychiatric nurse practitioner and clinical psychologist, among other healthcare professionals. The aim is that this program will address “existing gaps in the system by deploying a multidisciplinary outreach team to work directly with those hardest to serve.”

The council was expected to vote on accepting round one of a state grant, but after 6 p.m., the agenda item was moved to a vote on Tuesday. The city’s HSSD applied in April and was awarded the full requested amount of $441,151.13 on June 27, 2022.

The Regional Task Force on Homelessness Continuum of Care Advisory Board Ad Hoc Committee on Addressing Homelessness Among Black San Diegans gave an update on their work and provided six recommendations to assist in putting a stop to the homeless crisis, which included:

1. Develop a data dashboard to track progress on equity goals.

2. Inclusive procurement and creatine seats at the table to include people with lived experiences in decision-making.

4. Mentorship of Black-led organizations, including expanding strategies for outreach

5. Center the voices of people with lived experience who are black, and offer compensation for sharing their experience.