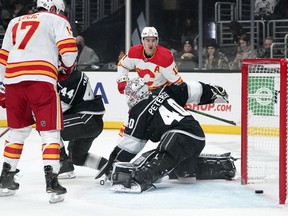 Thursday’s big storyline was Darryl Sutter’s return to Staples Center, and understandably so. During his stint as skipper in Los Angeles, Sutter led the Kings to a pair of Stanley Cup parades. Now the head coach of the Calgary Flames, this was his first trip back on the rival bench.

On Friday, the Flames continue a four-game road-trip at Honda Center in Anaheim.

It was there, just less than a year ago, that something changed for Sutter. He was sort of semi-retired from the coaching business, working as an adviser to the Ducks’ staff but also spending a big chunk of his time back home on the farm in Viking, Alta.

Prior to Thursday’s showdown at Staples Center, a reporter mentioned to the 63-year-old that it seems like his passion for the game and for the gig has never faded.

For a while, Sutter revealed, it did.“First off, being a head coach, you put so much into it,” Sutter said. “To me, it’s not two or three hours a day that you put into it. You push your family out. You push everything out. It’s hockey, that’s it. So it’s not the passion you lose. It takes something away from you, right? And you want to that back, the rest of your life back to you. But when I had the opportunity to come back to Calgary … ”

He rewinds to several weeks before the Flames called, renewing conversations about a reunion.

“I went to training camp in Anaheim with the team last year, in January, and it’s a good feeling but it’s also one that’s like, ‘OK, I got that feeling again,’ ” Sutter said. “It was one that you said, ‘OK, I’m going to leave that over there.’ But I started feeling that in training camp last year. I was like, ‘Oh jeez, I can’t watch this. I’ve gotta be coaching.’

“That’s what it is, right? It’s a part of you. Not everybody can say that or do that. The only reason you can rekindle or repeat that is to win.”Sutter is a proven winner. The evidence is hanging from the rafters at Staples Center — a Stanley Cup banner from 2012, another from 2014.

“I hadn’t coached for a couple years when I came here, but what drove me is I’d lost in the finals,” Sutter said after Thursday’s optional morning skate in Los Angeles. “It’s not about a job or a career. There are a lot of coaches that it is just a job or a career. That’s never been my part of hockey. I was lucky when I played to go to conference finals and to go to Calder Cup finals, and you want the next part. You always want the next part. And then as a young coach, to win the Turner Cup in the minors …

“So you just have to stay focused on what you want in the end.”

Both Stanley Cup titles were clinched on the Kings’ home ice. Both nights, after that final buzzer, he was sporting a smile as bright as West Hollywood’s famed Sunset Strip.

Now in his 27 th season on an NHL bench, Sutter is shooting to complete the championship hat-trick in Cowtown. After being hired for a second stint with the Flames, he talked about “unfinished business,” a reference to that near-miss in 2004.

“There’s probably not many ever that have won more than one — players, coaches. There’s not many, especially as a head coach,” Sutter said Thursday. “It’s like a whole different level, to me. That’s what it is. It’s like all that matters to me. You’re trying to translate that to the players that to get to that level, what it takes, and the difference it makes in their career and in their lives.”

Sutter has, no doubt, made a difference with this current cast of Flames.

They arrived in Los Angeles with a 13-4-5 mark. That’s four regulation losses in a span of nearly seven weeks.

They’ve been hanging around near the top of the Pacific Division standings.

They have established a reputation as being all kinds of not fun to play against, and their demanding coach deserves a pile of credit for that. That has, after all, been a hallmark of his teams.

As fourth-line centre Brad Richardson, a Stanley Cup champ with the Kings in 2012, summed up when asked about Sutter’s impact: “I just think you have no choice but to be at your best.”

This remains a work-in-progress — the boss will stress that part — but the Flames are trending in the right direction. That feeling that struck Sutter last January at Honda Center, that itch to be a full-time, all-in coach again, it’s ultimately been big-time beneficial to this Calgary-based crew.

Listing off a handful of core pieces, Sutter talked Thursday about how the returnees now have a better understanding of “how they can play to be successful.”

“And you’re seeing that,” he said. “Look at how far Johnny (Gaudreau) and Matthew (Tkachuk) and Lindy (Elias Lindholm) and Noah (Hanifin) and Rasmus (Andersson) … Those guys have come a long ways in their game and feeling good about their game. And good for them, because then it shows up in individual stats, too. As long as that ‘W’ is just as important as a goal, then they’ve made strides.”