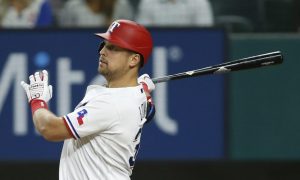 The Seattle Mariners (55-48) travel Friday to Globe Life Field to start a three-game set with the Texas Rangers (36-66) at 8:05 p.m. ET. Let’s analyze BetMGM Sportsbook‘s lines around the Mariners vs. Rangers odds with MLB picks and predictions.

GIMME the MARINERS (-145) for 1 unit because I expect Gilbert to bounce back from his disappointing start against Oakland this past weekend.

Gilbert was the No. 14 overall pick in the 2018 MLB Draft and the third-ranked prospect in Seattle’s loaded farm system. He’s faced a lot tougher lineups than Texas’s and has allowed 2 or fewer earned runs in eight starts this season.

Furthermore, the Rangers just traded the only All-Star in their lineup in Joey Gallo, and they’ve been abysmal following the All-Star Game.

There’s no question that Texas has the worst lineup in MLB at the moment and this is an absolute get-right spot for Gilbert, and for Seattle whose back-to-back losses to the Houston Astros this week snapped a four-game win streak.

The Rangers have lost 16 of their previous 19 games and 15 of those losses were by at least 2 runs. Also, Seattle has covered its only game as a road favorite this season and Texas has the fifth-worst cover rate as a home dog at 17-18 ATS.

PASS with a slight “lean” to the Under 8 (-110) because the Rangers are 13-31-1 O/U as a home underdog this season and Seattle’s lineup ranks in the bottom-10 against left-handed pitching in wRC+, wOBA and BB/K.

Also, the Mariners haven’t officially named a starter so at the moment “Logan’s bounce-back effort against the Rangers” is based on him actually getting out there. That being said, Seattle’s bullpen ranks second in WAR.