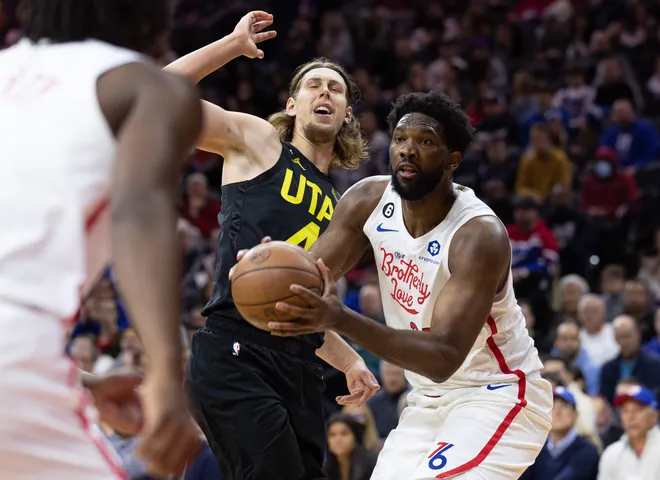 Joel Embiid scored a career-high 59 points and added 11 rebounds, eight assists and seven blocked shots in a historically dominant performance, powering Philadelphia to a 105-98 victory over the Utah Jazz on Sunday night.

Tyrese Maxey jumped on Joel Embiid’s back and pounded the big man’s chest in celebration of the greatest game in the 76ers center’s career. The frivolity was fitting because Embiid carried the Sixers in the fourth quarter — all while each bucket etched his name alongside the greats in NBA history.

“My teammates knew who had the hot hand and they just had to feed me,” Embiid said.

Embiid has clearly rounded back into form over the last week after recovering from an illness. The reigning NBA scoring champion dropped 42 points a night earlier in a win against Atlanta. Embiid scored 26 of Philadelphia’s 27 points in the fourth quarter and he became the first player in NBA history with 50 points, 10 boards, five rebounds, five assists and five blocks in a game since blocks became an official stat in 1973-74.

“He was just getting everything. I’ve never seen a more dominating performance when you combine defense and offense.”

Fellow teammate Mattisse Thybulle gushed: “It’s absurd. My friends were texting me after the game – it’s like a 2k stat line. It’s not one of those things you see in a real basketball game. It’s like when you pick one player on 2k & just do everything with them. It’s pretty ridiculous.”

Unsurprisingly, the performance set a new career-high for Embiid’s point tally and marks the highest-scoring performance by any player in the NBA this season.

Malik Beasley scored 18 points. Sexton and Lauri Markkanen each scored 15 points for the Jazz, who lost a night earlier at Washington. The Jazz are 5-0 at home.

“It’s OK to be proud of how you’ve played to this point,” coach Will Hardy said. “We try to have our guys embrace that. It’s on us as a staff to continue to teach and remind them that there’s still a lot we can get better at.”

Utah: Went 4-3 on a stretch of six of seven games on the road. Missed 8 of 13 free throws in the first half.

76ers: Embiid scored 24 points in the first half, the 30th time since the start of last season he has scored 20-plus points in a half. Matisse Thybulle had five steals.

76ers: Have the next four days off until another back-to-back home set against Milwaukee on Friday and Minnesota on Saturday.