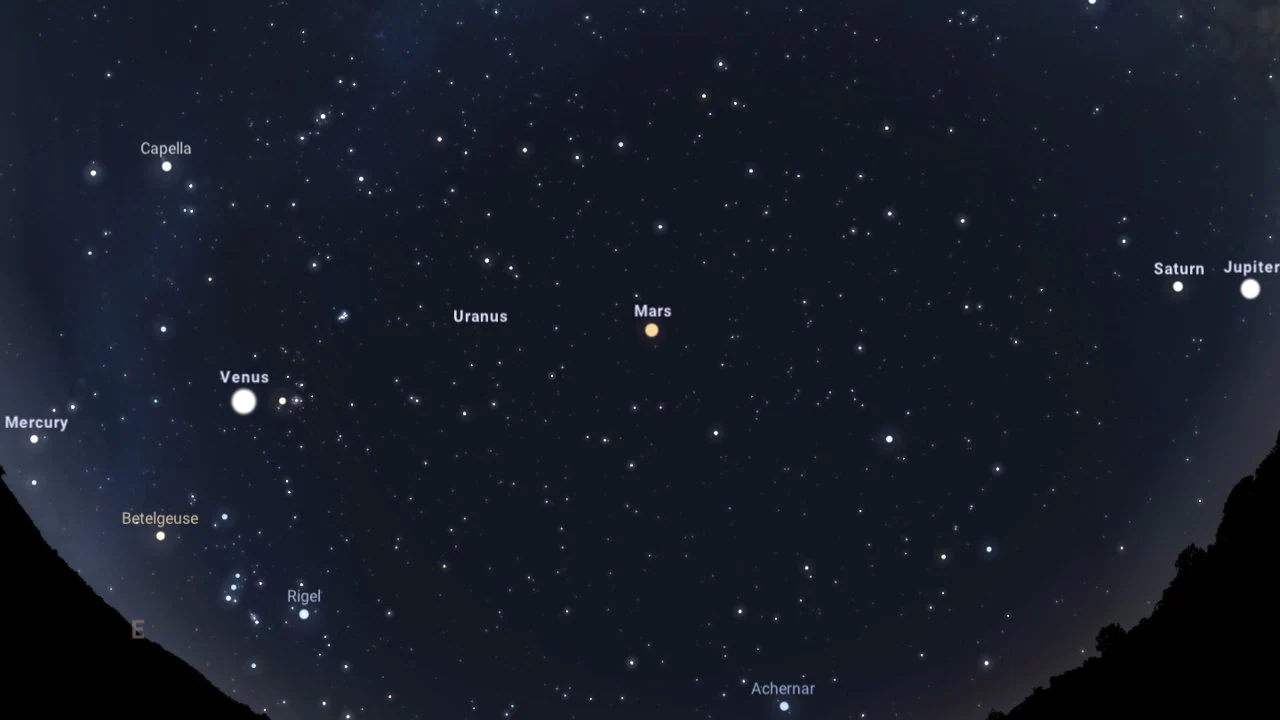 Beginning in the early morning hours of Friday, June 3, the five planets of Mercury, Venus, Mars, Jupiter and Saturn will align in planetary order.

This rare phenomenon has not occurred since December 2004, and this year, the distance between Mercury and Saturn will be smaller, according to Sky & Telescope.

Stargazers will need to have their binoculars handy along with a clear view of the eastern horizon to spot Mercury near the start of the month, the space magazine said. As June progresses, Mercury will become brighter and easier to see, according to Diana Hannikainen, observing editor of Sky & Telescope.

The rest of the planets should be consistently visible to the naked eye, she added.

The best time to view the five planets is in the 30 minutes before sunrise, she said. The night before you plan to view the alignment, check when the sun will rise in your area.

Some stargazers are especially excited for the celestial event, including Hannikainen. She flew from her home west of Boston to a beachside town along the Atlantic Ocean to secure an optimal view of the alignment.

“I’ll be out there with my binoculars, looking towards the east and southeast and crossing all my fingers and toes that it is going to be clear,” Hannikainen said.

You don’t have to travel to catch a glimpse of the action because it will be visible to people around the globe.

If you wake up and the weather blocks the sky, don’t worry, Hannikainen said.

“Just keep looking throughout the month of June and as soon as you have a clear morning, go out and enjoy that view,” she said.

The moon joins the party
In addition to the five planets, the waning crescent moon will also be in alignment between Venus and Mars on June 24.

Unlike on the days leading up to it, this special celestial alignment can be viewed in the hour before sunrise, Hannikainen said.

By the next day, the moon will have continued its orbit around the Earth, moving it out of alignment with the planets, she said.

If you miss the five-planet alignment in sequential order, the next one will happen in 2040, according to Sky & Telescope.

There will be seven more full moons in 2022, according to The Old Farmers’ Almanac:

These are the popularized names associated with the monthly full moons, but the significance of each one may vary across Native American tribes.

Lunar and solar eclipses
There will be one more total lunar eclipse and a partial solar eclipse in 2022, according to The Old Farmer’s Almanac.

Partial solar eclipses occur when the moon passes in front of the sun but only blocks some of its light. Be sure to wear proper eclipse glasses to safely view solar eclipses, as the sun’s light can be damaging to the eye.

A total lunar eclipse will also be on display for those in Asia, Australia, the Pacific, South America and North America on November 8 between 3:01 a.m. ET and 8:58 a.m. ET — but the moon will be setting for those in eastern regions of North America.

Meteor showers
Check out the remaining 11 showers that will peak in 2022:

If you live in an urban area, you may want to drive to a place that isn’t littered with city lights to get the best view.

Find an open area with a wide view of the sky. Make sure you have a chair or blanket so you can look straight up. And give your eyes about 20 to 30 minutes — without looking at your phone or other electronics — to adjust to the darkness so the meteors will be easier to spot.