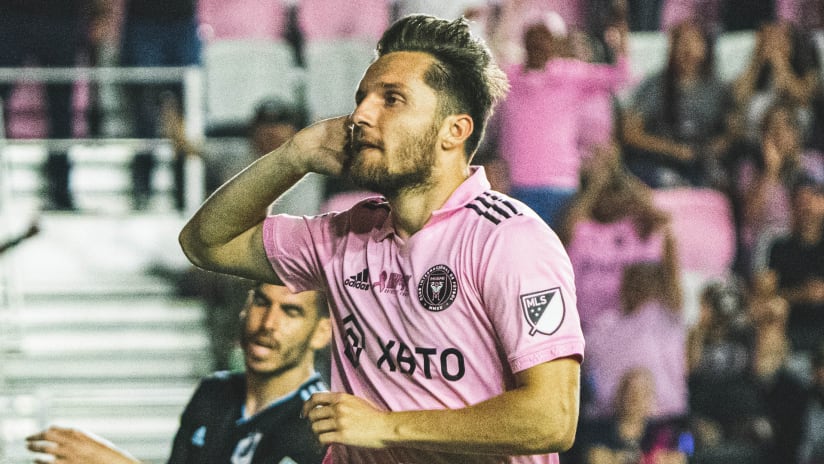 The superlatives stacked up thick and fast in Los Angeles on Wednesday evening as the team atop the MLS standings formally introduced one of their latest star signings, a reigning champion of Europe, an icon for his country and one of the top center backs in world soccer.

“He is a coach’s dream, he is a club’s dream,” said LAFC co-president and general manager John Thorrington. “We have never seen a player like him in our league.”

Taking care to note the Angelinos’ position seven points clear in both the Supporters’ Shield and Western Conference races, LAFC on-air personality Max Bretos called him “a new superhero for the club,” one “that has put the Black & Gold back in the spotlight here, throughout the country and throughout the world.”

For Giorgio Chiellini himself, however, humility was the order of the day.

“I want to be honest. When I start to see the team, I said, they have fantastic defenders; why’d they call me?” said the Italian with a disarming smile, flashing fluent English despite this being his first professional destination outside his home country.

“Everyone talks about Mamadou Fall, but I can say Jesus Murillo, [Sebastien] Ibeagha, who played the last matches and also on the wing – LAFC has fantastic defenders and it’s a fantastic team. Surely I can help them. I can help the team, not just playing, but leading every day the group, and this is my game and what I think. But I have fantastic teammates, and this is important.”

The Azzurri legend was all about the collective as he began his North American adventure, hailing the good work that’s already been done on the field by his new teammates, and off it by Thorrington, SVP of operations and assistant GM Will Kuntz and LAFC’s large, well-heeled ownership group.

“Surely it’s a new chapter of mine, but from the first time I started to talk with Will and John, I’m fully convinced of this club, that this club is perfect for me,” he said. “I start to understand the organization behind the club, and they really want me. And I understand this feeling from the beginning, and I am really happy and proud to be here.

“I hope to – I’m sure I can – bring something to this club, but I am fully convinced that I receive more than what I bring. I hope to lift some trophies because it’s my goal, it’s our goal, it’s the team’s, the club’s goal.”

The Juventus icon won nine Serie A titles and three Serie A Defender of the Year awards – among myriad other team and individual honors – with La Vecchia Signora (The Old Lady), and still had a year left on his most recent contract. Chiellini, who turns 38 in August, long served as captain for both club and country, including during Italy’s championship run at Euro 2020, and feels he still has plenty left in the tank despite his age.

It seems a California vacation with his then-girlfriend (now wife) Carolina Bonistalli many years ago planted a seed of curiosity about the distant land. Chiellini insisted that once he got the call from LAFC – communication that began in the immediate aftermath of Italy’s shocking Qatar 2022 World Cup qualification loss to North Macedonia in March – he felt no need to explore any other options elsewhere.

“Los Angeles is a fantastic city. I am very curious to live because I went here on holiday about 10 years ago,” he explained with another smile. “We take a Mustang cabriolet [convertible] and go over all of California. Now it’s totally different. I have two daughters and I want to discover California in another way.”

Chiellini acknowledged his elder statesman status on a youngish roster that was already on course for championship contention even before his arrival was followed by the sensational capture of Welsh winger Gareth Bale and return of Carlos Vela on a new deal. Both Bale and Chilleini arrive on Targeted Allocation Money (TAM) deals despite their illustrious backgrounds, while Vela remains a Designated Player.

Now, the Juventus legend said he’s been studying footage of LAFC matches for months and wants to help nudge a talented squad over the top.

“I said that LAFC is the perfect team for me,” he said, “for the organization, but also in the team because it’s full of young players. I think they can help me. Surely it’s impossible for me to have the same physical characteristics like 10 years ago, but I can bring also something to them, and we have to create a good mix with experience, with enthusiasm, with younger players in order to become a winning group.

“I don’t have to change something or to bring something special. Just to add what I am and I hope to continue in this way, because we are at the top and we have to finish at the top. But it’s a long trip.”