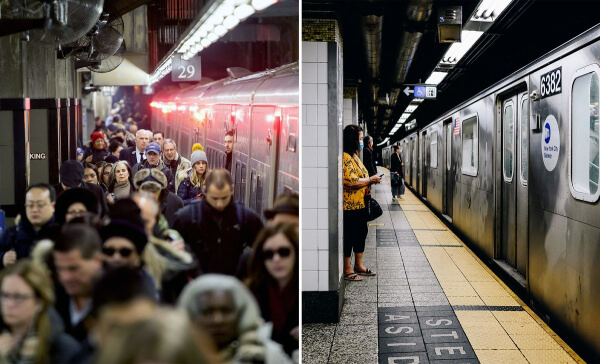 In recent months, New York City’s subway system has been besieged by crime and violence, and city officials have scrambled to respond. Now, the city’s transit authority announced plans to test platform doors at three subway stations in response to calls for action.

New York’s Metropolitan Transit Authority (MTA) CEO Janno Lieber announced during an interview on Wednesday the agency is piloting platform doors at three subway stations, creating barriers that block access to subway tracks until an incoming train has come to a full stop.

The barriers would prevent riders from falling on to subway tracks, with Lieber saying that while it often happens on accident, it’s sometimes voluntary by people struggling with mental health issues and who may not understand the dangers it creates.

“We’re also going to be piloting new technologies to detect track incursion using thermal technology, using laser technology, so we can know quicker when people get on the tracks and hopefully, interdict that kind of behavior,” said Lieber.

Platform doors will be tested at New York’s Times Square L train station, the Sutphin Boulevard stop and where the JFK AirTrain connects to the subway.

Initially Lieber pushed down talks of platform doors at New York City subway stations, saying the existing infrastructure wouldn’t be able to accommodate it and that MTA needed to consider Americans with Disabilities Act (ADA) compliance.

New York City Transit even conducted an assessment to see if subway platform doors would be feasible across the city’s subway system. It concluded that, overall, only 27 percent of stations could accommodate platform doors — that’s 128 stations within the 472 studied.

However, Lieber changed his tune this week acknowledging it is “a really complicated issue.” Lieber said MTA has created an interagency group to study the increasing number of New Yorkers starting to ride the subway again as the COVID-19 pandemic slows down. MTA is also partnering with New York University’s Psychiatry Department and Medical Center to figure out how to deter people from jumping on subway tracks, many times in attempting suicide.

“It’s going to take a while. We’re going to put the money together, which is a little complicated. But our goal is to try out these technologies, at different places in the system, including three stations, trying out platform doors,” said Lieber.

In January, 40-year-old Michelle Alyssa Go was killed after a man pushed her onto subway tracks before an oncoming train — which caused New York City Mayor Eric Adams to admit he felt unsafe riding the city’s subway.