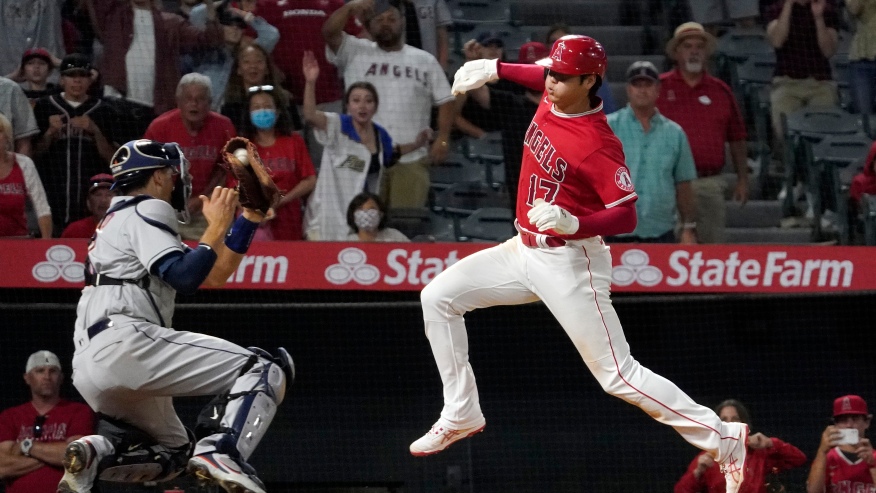 Houston manager Dusty Baker says a huge source of pride about his AL West-leading team is the way it plays defense. It showed Wednesday night as right fielder Chas McCormick made two huge plays in the Astros’ 9-5 victory over the Los Angeles Angels in 12 innings.

McCormick made a one-hop throw to prevent Shohei Ohtani from scoring the potential game-winning run in the 10th inning. Two innings later, the Astros broke through with four runs, including a two-run double by Jose Altuve, to reduce their magic number to three for clinching their fourth division title in five seasons.

“He has been working on his throwing and grip. He made a great play in the outfield,” said Baker of McCormick. “Defense doesn’t win you many games but it can lose you games. That was a big one to win.”

Ohtani, who was 0 for 2 and walked four times, made an ill-advised run home on David Fletcher’s bases-loaded lineout to shallow right. McCormick caught Ohtani by several steps with a one-hop throw — the two-way star didn’t slide, tried to avoid the tag and ran past the plate, and easily was tagged out by catcher Jason Castro.

“I wasn’t surprised. I know he can run a little bit and was doing everything to win. I’m happy I made a good throw on it,” said McCormick, who prevented an RBI single by Jack Mayfield with a diving catch in the third. “It wasn’t that tough of a play. The one on Mayfield was one of my better plays, but the biggest play was throwing out Ohtani.”

“I know it wasn’t that deep but we have challenged it in the past,” Maddon said. “They played great defense on us. We had opportunities to end it and they wore us down.”

Pinch-runner Marwin Gonzalez scored the go-ahead run on Jake Meyers’ single off Sam Selman (0-1). Altuve then provided some insurance with a double down the right-field line to make it 8-5. Altuve advanced to third on the throw home and scored on Alex Bregman’s sacrifice fly.

Yimi Garcia (4-9), the seventh of eight Houston pitchers, got the win.

The Angels, who have dropped six straight, trailed 3-0 going into the seventh before scoring five times. Mayfield provided the key hit with a two-out, three-run double down the right-field line to give Los Angeles a 5-3 lead.

The Astros quickly responded with a pair of runs in the eighth to tie. Alvarez hit an RBI double and scored on Yuli Gurriel’s single through the hole at shortstop.

The Astros jumped out to a 2-0 lead in the first when Alvarez drove a fastball by Janson Junk 456 feet to the berm in right-center. It was the longest home run of Alvarez’s career and the second-longest by an opposing player at The Big A this season — Yankees slugger Giancarlo Stanton had a 457-foot drive last month.

“That was a high rocket like what Willie Stargell and Big Willie McCovey used to hit. You knew he hit it out, you just didn’t know how far that was going to go,” Baker said.

Junk had retired 10 straight before Castro led off the fourth with a homer into the elevated stands in right field to give the Astros a three-run advantage.

Luis Garcia, who is making a strong bid for AL Rookie of the Year honors, had his fourth outing where he went at least six innings and didn’t allow a run. The right-hander allowed only three hits and three walks with one strikeout.

Junk, who was acquired from the New York Yankees in the Andrew Heaney trade, went four-plus innings in his third big league start. The right-hander allowed three runs on four hits with a walk and a strikeout. He has allowed five home runs in his three starts.

Astros: OF Michael Brantley (right knee discomfort) is not ready to come off the injured list after testing the knee out before the game. … RHP Jake Odorizzi (right foot soreness) threw a bullpen session and could return to the rotation soon. … C Martin Maldonado got the day off.

Angels: LHP Reid Detmers (COVID list) threw a three-inning simulated game and could be activated during this weekend’s series against Seattle.

The Astros and Angels meet for the final time this season on Thursday. RHP Lance McCullers Jr. (12-4, 3.11 ERA) is tied for fourth in the AL in wins and 10th in strikeouts (176). He will be opposed by Angels RHP Alex Cobb (8-3, 3.59 ERA), who returned from the injured list and beat the Chicago White Sox in his last start on Sept. 16.